NASA has long been researching the viability of sending humans to Mars. Besides exploring the terrain with that sassy Mars Rover, the agency has also experimented with what astronauts might eat should they embark on the months-long voyage to the Red Planet (the answer: Spam and Nutella), among other tests.

In the latest Mars mission-related news, NASA-backed researchers with SpaceWorks Enterprises are reportedly experimenting with putting astronauts into a medically-induced deep sleep, called torpor, during the transit time to Mars.

Once the torpor sets in, astronauts would enter a so-called “hibernation” for the rest of the trip, which would apparently take 180 days, at the quickest. They’d be fed through an intravenous tube, and possibly spin around in a low-gravity environment to ward off bone and muscle loss.

“Therapeutic torpor has been around in theory since the 1980s and really since 2003 has been a staple for critical care trauma patients in hospitals,” aerospace engineer Mark Schaffer, with SpaceWorks Enterprises in Atlanta, is quoted as saying. “Protocols exist in most major medical centers for inducing therapeutic hypothermia on patients to essentially keep them alive until they can get the kind of treatment that they need.”

One foreseeable obstacle? As of now, doctors have only put patients into torpor for week-long periods — hardly enough to get an astronaut all the way to Mars.

“We haven’t had the need to keep someone in [therapeutic torpor] for longer than seven days,” Mr. Schaffer is quoted as saying. “For human Mars missions, we need to push that to 90 days, 180 days. Those are the types of mission flight times we’re talking about.”

The research, at first, seemed odd to us. Why not just keep the astronauts awake, so they can make adorable cookies and take selfies and stuff? Putting the astronauts into a deep sleep would reportedly save lots of money, as they’d require significantly less food, , clothing, and amenities. Additionally, according to Discovery:

Overall, putting a crew in stasis cuts the baseline mission requirements from about 400 tons to about 220 tons.

Get ready, Buzz Aldrin. Your dreams of a colony on Mars might be closer to reality. 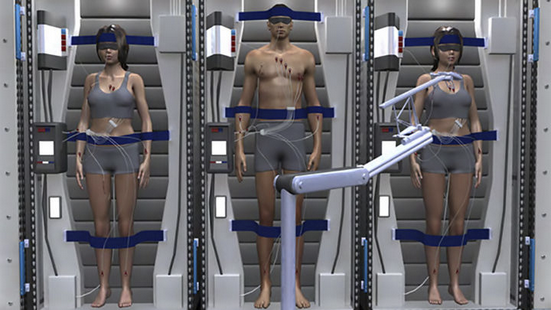