Highway 65 got office space because Ray Ray cannot keep runnin’ this label from her mansion. She shows off the sweet new pad to some reporter from Country Music Weekly but all he wants to talk about is Ruke (that’s Rayna and Luke). Rayna is like, “nu-uh, I don’t discuss my personal life, but if you want to talk about my number one record, cool.” Reporter’s all, “no thanks, only Ruke is gonna get re-tweets of my article. If you don’t tell me what Luke whispered to you on stage when he proposed then I’m outtie.” And then Rayna’s like, “bye.”

Then over at Sad Sack Inc., aka where Deacon and Scarlett live together in varying states of depression, it’s Deacon’s week in the Prozac seat. He sits on the floor, blaming it on the rain about how Rayna picked Luke, thus becoming Ruke, and he really wanted her to be Reacon. Scarlett plops down to give him a paraphrased version of the pep-talk Gunner gave her last week. Scarlett is a pain in Deacon’s ass, and he doesn’t know why she came back to Nashville, but he’s glad she did. And though we hate to admit it, so are we.

Gunner asks Zoe to move in, for financial reasons. He says it’s stupid to pay for an apartment when she’s about to go on tour. So, Gunner will be all-alone, with Zoe’s stuff, writing songs with moon-eyed Scarlett. This is a bad idea. Zoe, who usually has good instincts and then chooses to ignore them, is distant and moody. She still wants to know why Gunner convinced Scarlett to stay in Nashville. Uh, ask him.

Tandy, sans perm, tells Rayna she’s kickin’ ass running HW65 solo and we think she’s gonna quit, but then Ray finds out her album has been bumped to #2 by everyone’s favorite closeted cowboy.

Layla proves how bad of a actress / performer she is by telling Will his album went to number one with the same dead eyes she might use to tell him she just drowned his cat in the backyard. He’s all, “babe this is huge” and she’s all “I have no career and you’re gay”. Sure, it sucks she married someone who is repulsed by her sexually, but girl needs to GET OVER IT. Layla’s coming off as homophobic as a Luke Wheeler fan here. Anyway, that’s what she gets for marrying someone she hardly knew for publicity reasons. To bump up her career is the only reason Layla ever flirted with, slept with, dated or married Will. This relationship had nothing to do with love, ever, so she can get the hell off that high horse. Also, I don’t know why she’s so surprised. Will never wanted to have sex with her, like ever, remember? I am so sick of Layla. Can we Peggy her off?

Juliet is convinced there’s no way this baby could be Avery’s, as they were always very careful (sure, Juliet, just sure). She’s only had unprotected sex once and that was with Jeff Fordham. Uh-oh.

There’s a hot new waitress at the Bluebird. She lets Avery know she’s DTF within her first two minutes of screen time. I’m all for some fresh blood in the cast, but not if they are getting in the way of the Juliette / Avery reunion. So watch it, hot waitress! Then Zoe comes in with her good instincts telling her this Gunner / Scarlett stuff is weird (it is). She thinks the answer is to talk to Scarlett (okay). Really she needs to talk to Gunner. I hate how a lot of the women on this show consistently hide their feelings. It’s like the, “I’m fine” hour. Ladies, we know you’re not fine! The exception is Juliet who always lays it all on the table. Thank God for Juliet.

Scarlett just ‘shows up’ at Gunner’s. Then she apologizes for just “showin up” and he says, “show up anytime!” This does not look good for Zoe. Gunner’s house, bought with all that song writin’ money is clearly incredible. Scarlett has a look of, ‘what if’ on her Georgia peach face. Gunner shows her the best part – his garage-recording studio. The studio is professional, cozy and inspiring. It’s so Scarlett. She coos, “It’s real cool. You done real well for yourself.” And I don’t hate Scarlett at all. I want her to stay in here writing songs with Gunner forever. Especially when they start to sing. These two singing together in the first season, Nashville promo is what got me watching this show in the first place. They are magical together. Zoe obviously knows it. That’s why she looks so sad when she sees them magically collaborating through the window. Instead of coming in and saying hello to her boyfriend and former best friend, with whom she’s in a ‘wicked game of phone-tag’, Zoe pretends she didn’t see them. Instead, she goes to rehearsal and messes up all her dance steps. She does so poorly, in fact, that I’m wondering how Zoe even got this job, singing back up for Juliet, in the first place. Here’s the rub – why can’t Scarlett and Gunner just be writing partners? Zoe can be his wife and Scarlett can be his ‘work wife’. Scarlett can’t handle having all her eggs in one basket, anyway.  Why not spread the love around? Zoe and Gunner have shown themselves to be good romantic partners. And let’s not forget that Rayna and Deacon, whom Scarlett and Gunner are the younger versions of creatively – were just professional partners throughout most of their careers. The Rayna / Deacon re-ignited love machine only kicked in once the show did.

Rayna takes Luke to go through her dead parents’ stuff. On the way there, he tells her what every Diva wants to hear when she’s concerned her album’s not sellin’ the way she want it to sell, “you can stay home and be Mrs. Luke Wheeler.” He almost immediately takes it back with an “I’m just joshin’ ya” and though I’m not surprised I’m still like, ‘whoa Luke, whoa, you’re talking to Rayna James. Wheels down, please.’

We learn that Luke, unlike Mansion dwelling Rayna, came from humble beginnings and that Luke has no idea that Rayna and Lamar had all that bad blood between ‘em.  I’m wondering how these two people getting married as they appear to know nothing about one another. Luke gives Rayna a crash course in how to sell out, ‘hell no, he hasn’t tasted the BBQ sauce with his face on it, that’s not the point, Wheels UP!’ Luke wants Rayna to know that the potential to sell out is sky-high now that they’re RUKE. We close-up on Rayna’s seven-carat diamond and I’m wondering if Rayna even likes Luke.

Jeff, per Will’s request, takes Layla to the Patsy Cline audition and we run into none other than LAURA BENATI (sorry, I mean Sadie Stone). I love it when Broadway comes to Nashville. I love that I know they can really sing and so we have some killer musical performances coming our way. But secondly, I always think these actors are wasted on traditional sitcoms where they are not required to use those heavenly pipes. Oh, Sadie, you couldn’t have come at a better time.

The ‘film producers’ love Juliet as Patsy Cline. Is there anything Juliet can’t do? They ask if she has any conflicts they need to schedule around other than her tour. She knows she has that abortion scheduled for later in the day, so nope – she’s all clear. Then she runs into the devil himself, Jeff Fordham, who commends her on gaining weight for the audition. Evil Jeff Fordham –he really is a full monster.

Layla’s audition was clearly just a courtesy and so we didn’t even need to see it (thank god). But now she wants Will to know she hates him and she owns him. He’s going to do whatever she says or else she’ll reveal he’s gay. Layla is also a full monster. Ugh, Layla. Get off my show.

A lot of kids, when they are young and don’t know better, when asked what music they like, will say, “anything but Country.” I know I fell into this camp. But it’s not because I didn’t like Country. It’s because one doesn’t always know when they are young and stupid that all those great American Folk artists are Country. That some of their favorite songs they’ve ever heard are Country. You say you like ‘everything but Country’ because you are thinking that ‘Country’ means artists exactly like Luke Wheeler.

So here we are at Luke’s sound check, where he’s singin’ about a “good woman with legs that won’t quit’, when Deacon swings by to grab his guitars. Since they proposed to the same woman, clearly this tourin’ as buddies thing ain’t gonna work. Not to mention, Deacon’s probably just as sick of this ‘tractor ridin’ Country pop’ as I am. But Luke wants to show Deacon who’s boss so he won’t fire him and he won’t let him quit. I’m over both of these duds and I want Rayna to kick them both to the curb. Can Liam McGuinness just come back now, please?

Tandy is moving to San Francisco to work for a non-profit. She no longer wants to be ‘Lamar Wyatt’s daughter’ or ‘Rayna James’ sister’ – she needs to be Tandy Hampton. I get that completely but, question, why is Tandy’s last name Hampton? Has there ever been a mention of Tandy having a husband? Can someone explain this me? We know that ‘James’ is Rayna and Tandy’s mother’s maiden name. Shouldn’t it be Tandy Wyatt? If anyone knows the answer to this, please explain in comments, thanks.

So remember when at the beginning of this episode Rayna didn’t want to tell a reporter what Luke whispered to her when he proposed? But then Luke gave Rayna a lesson in how to sell out? Well now Rayna is performing her hit single on GMA and everyone wants to know – what did Luke whisper when he proposed? Rayna takes a moment before coming out with, “he whispered something about his trick knee.” You can tell she thinks it’s so much less special now (it is). But also, Ray, you must have not been paying attention to the ‘sell out lesson’ because you should have used that stupid anecdote for an exclusive interview where the powers that be could promote a big secret revealation for weeks. You don’t just put these nuggets out there during a free, live show. You need a RUKE tutor for realz.

Juliet drops Avery’s stuff off at his apartment. They are clearly still in love and I love them together. This scene was great. Finally some characters are screaming at each other. Juliet screams, “I guess we’re done for good.” Well, not so fast because…Nashville law requires that Juliet know how far along her pregnancy is before she terminates it. She already knows, four weeks, because that’s when she danced with the devil. But no, no – she’s closer to eight weeks. OMG. #javerybaby 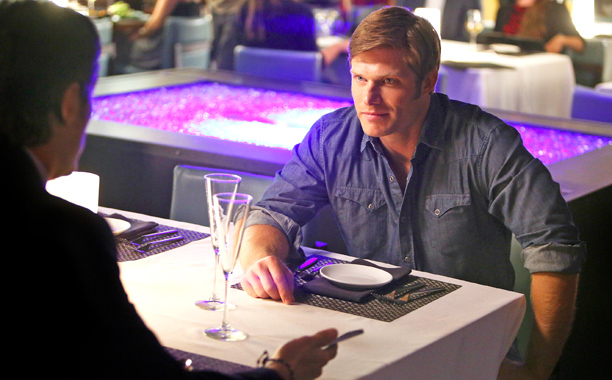