A still from the add depicts Domenic Recchia as an ally of Bill de Blasio and Al Sharpton (Screengrab: Michael Grimm for Congress).

“Domenic Recchia voted with Bill de Blasio 99 percent of the time, supporting higher taxes and more tolls,” the ad proclaims after a short voiceover from Mr. Grimm. “Now Recchia refuses to stand up to de Blasio’s plan to build government housing in our neighborhoods.”

The new ad, however, incorporates Mr. Sharpton into Mr. Grimm’s arsenal for the first time. It alleges that Mr. Recchia failed to condemn to the black leader’s abandoned plan to lead a march across the Verrazano Bridge in protest of Staten Islander Eric Garner’s death at the hands of police officers earlier this year.

“Like de Blasio, Recchia refused to stand up against Sharpton’s attempt to shut down the Verrazano Bridge protesting NYPD,” the ad declares, before showing headshots of Mr. de Blasio, Mr. Recchia and Mr. Sharpton arranged in a sort of unholy trinity. “The liberal dream team: de Blasio, Sharpton and Recchia. Domenic Recchia–he’ll always be their puppet.”

The Grimm campaign declined to disclose the size of the ad buy, though the team said the new piece’s run would be comparable to that of its previous attack spot, “Tax-Raising Machine.”

Mr. Grimm has received little support from national Republicans and has faced difficulty raising campaign cash since he was indicted in April on for allegedly hiring undocumented immigrants at a restaurant he owned prior to his 2010 election, and then allegedly lying about it to federal investigators. In the filing period that ended on July 15, Mr. Recchia raised more than 11 times the amount Mr. Grimm had raised.

And to pre-indictment fundraising, the candidates’ war chests were still comparable at the last filing date, as Mr. Recchia had $1.3 million on hand, and Mr. Grimm had just under $1.1 million–though the incumbent also had had more than $438,000 in outstanding legal fees.

The next filing date is on October 15.

Mr. Recchia’s camp dismissed the ad as a misleading smear–comparing it negatively to his own TV spots.

“Congressman Grimm’s deceitful and negative ad, highlights what a stark contrast there is in this election,” said spokeswoman Sarah Weinstein. “Domenic Recchia’s discusses his accomplishments for the people of this district and his vision for how he’s going to fight for working families in Congress. Michael Grimm’s uses distortions and lies to try and fear-monger. Nothing surprising from a desperate campaign trying to save itself from his 20-count federal indictment, including lying under oath, stealing from his workers, fraud, and failing to report over a million dollars in profit.”

Mr. Recchia has addressed some of the ad’s claims in the past.

After the Staten Island Republican Party sent an e-mail to supporters claiming Mr. Recchia favored public housing in the borough, Mr. Recchia initially proclaimed “we’re not going to build no affordable housing,” a statement he later backed away from. He also refrained from taking a stance on Mr. Sharpton’s march when Capital asked about it in August.

I’m Michael Grimm, and I approved this message.

Domenic Recchia voted with Bill de Blasio 99 percent of the time, supporting higher taxes and more tolls. Now Recchia refuses to stand up to de Blasio’s plan to build government housing in our neighborhoods. Like de Blasio, Recchia refused to stand up against Sharpton’s attempt to shut down the Verrazano Bridge protesting NYPD. 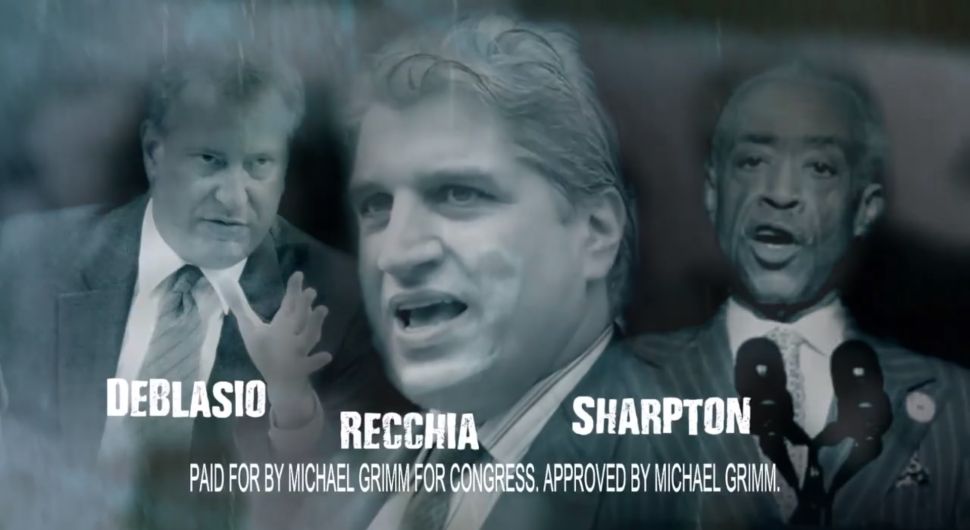