Aiming at the same thought-provoking, issue-probing indictment of television news as Network, the gripping cynicism of Nightcrawler provides more than its share of smart dialogue, high-wire tension and meaty subject matter. It ultimately proves questionable and unconvincing, but in this case, failure to launch is noble. It keeps you creeped out and fascinated.

You see them everywhere—chasing ambulances, invading taped-off crime scenes, following fire engines through traffic to some grisly destination. They are the shadowy nighttime freelance news videographers called “nightcrawlers”—first on the draw to film life’s most repellent yet newsworthy disasters and sell their exclusives in time for the nightly news shows at 6 and 11. In America, misery and horror get the best ratings if served during dinner and before bed.

Shocked by nothing, licking his chops over the grimmest examples of death and violence, Jake Gyllenhaal delivers one of his most internally visceral performances as Lou Bloom, a nondescript, asocial, mentally defective loner who finds focus in the sleazy bowels of Los Angeles where everyone fears to tread except cops, reporters and photojournalists. Lou’s life is empty and without defining motivation, but he gets what he needs by selling stolen property for store credit. He’s also got a camcorder and a police radio, and he’s ready to move into directional mics when he gets his first lessons in profiting from the misfortunes of others from a veteran videographer (Bill Paxton—terrific, as always, in a small role).

The first bit of advice (“Think of the coverage as a screaming woman running down the street with her throat cut!”) gives Lou an adrenaline rush that leads to murders, carjackings and other graphic abominations, which he sells to lusty Rene Russo as an unscrupulous news editor named Nina who works on L.A.’s lowest-rated station for whom no story is too lurid. Lou provides her with so much slime that her overnights soar. Lou is a fast-learning motor mouth who can talk his way into any roped-off crime scene, and before you can blink, he’s recording every sensationalism—babies stabbed, DWI crashes, fiery highway carnage, savage dog attacks—and selling it for fun and profit to Nina.

While she turns the news into a prime time photo gallery and road map of L.A. as a plastic neon underworld of fast cars, Mexican restaurants, strip malls and automotive repair shops, Lou hires a naïve young assistant (Riz Ahmed) to do his dirty work—a job for which he ultimately pays the ultimate price. Under the first-time direction of Dan Gilroy, who also wrote the tight, harrowing screenplay, this is a movie that races through hell with a gallop. Up to a point.

Among the problems: everyone in the film is so guileful and corrupt that there is no one to root for. Mr. Gyllenhaal is a thrill to watch as he masters the blank, thick-browed look of a gaunt, unstable geek who seems to be living on drug store medications, tying his long greasy hair into a knot while mapping out his next move, even if it means breaking the law to find evidence the police won’t provide. And Ms. Russo is perfect as a ruthless, ambitious and cold-blooded shrike. They make you queasy throughout. The film does a masterful job depicting the two unfairly chronicling L.A. as an ugly urban tangle in which no sane person would want to venture forth after midnight. The movie paints a gruesome picture of how low the once noble profession of television reporting has plummeted. But where it loses footing is in its failure to find some kind of balance in so much black, bleak immorality.

Sociopaths might risk everything to get a story regardless of who gets hurt, but if they break into private homes to do it and beat up security guards, they are not above arrest. And news directors do not eject the L.A.P.D. out of their control rooms without being taken into custody, no matter how forceful and attractive they are. Especially on a local station that isn’t even a network affiliate. When police confront TV station personnel about illegally obtained footage, Ms. Russo sends them packing and they willingly fade away without a protest. The notion is preposterous. The real L.A.P.D. would be leading the whole station away in handcuffs. Is there no one working in television in Los Angeles who isn’t depraved? Despite a worthy premise and a lot of solid work by a memorable cast, Nightcrawler does not hold up convincingly under close scrutiny. 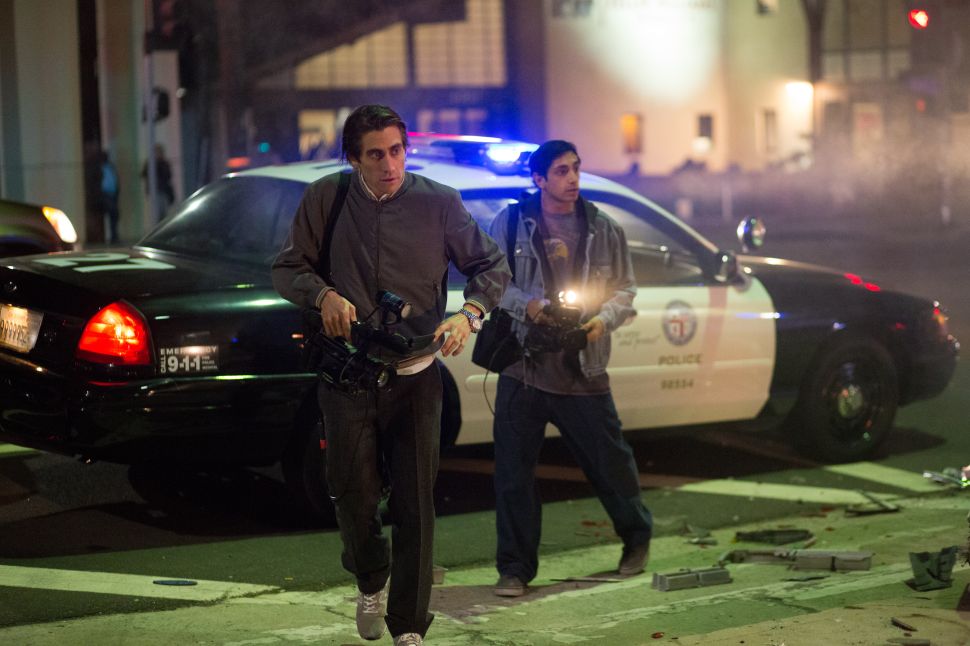