NY1 anchor Pat Kiernan took a stand against The New York Times this morning for failing to mention that NY1 hosted last night’s state comptroller debate in the paper’s coverage.

“I apologize for starting with a rant that has nothing to do with the viewers. But it’s happened more often than it should. Our NY1 political team puts a lot of effort into organizing debates, and they did the State Comptroller’s debate last night. We don’t do it because there’s a lot of money in debates. It’s a service to the city and the state,” Mr. Kiernan said in a preamble to his ‘In the Papers’ segment. “So it really annoys me, it really, really annoys me probably more than it should, when a particular newspaper prints a big story about our debate and then neglects to mention NY1. And it’s happened so many times with this particular newspaper.”

Mr. Kiernan, looking angrier than we have ever seen the genial Canadian anchor look, told viewers that as a result, he would not mention the paper of record by name.

“So this morning when I refer to the newspaper published in an Eighth Avenue office building, it will be up to you to figure out the omission and which newspaper it is,” Mr. Kiernan said. “We’ll start with a newspaper that is not published on Eighth Avenue,”said Mr. Kiernan, holding up a copy of the New York Post.

“Let’s move on to another one of the papers, the aforementioned paper that has its writers and editors based in a building on Eighth Avenue,” Mr. Kiernan said, before discussing the ebola coverage in The New York Times.

He then summarized several articles from said paper, but none that had to do with state or city politics. 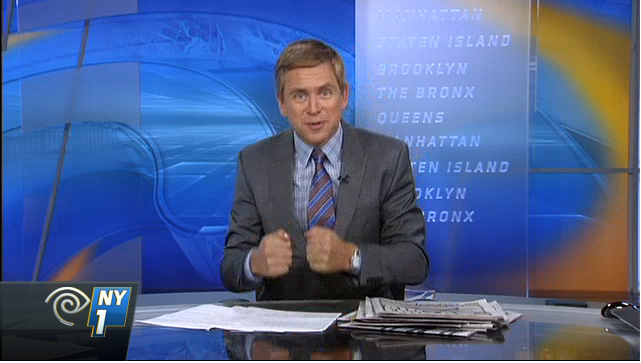