The next time you pass by a seemingly misplaced relic of a lost world, once known as the telephone booth, don’t dismiss it. Aside from hosting paid advertisements and Motley Crew stickers from decades ago, it turns out they are a lot more high tech than they look.

In some kind of Person of Interest-style plot twist, BuzzFeed has discovered hundreds of tiny radio transmitters known as “beacons” in phone booth ads throughout Manhattan that can be used to surveil anyone who crosses their path. Now, New York City has ordered that the beacons be removed.

Titan, an outdoor media company that controls thousands of NYC’s phone booth advertising displays, has already installed about 500 beacons without New Yorkers’ consent. They are manufactured by a company called Gimbal and are commonly used in supermarkets to alert customers to sales through smartphone apps.

New York City officials say Titan was given permission to install the devices because they were meant to be used for maintenance. But the capability of beacons goes a lot further than alerting the company when their ad panels need to be replaced.

For smartphone users with Bluetooth connectivity turned on, beacons can collect location information as well as details about a device, including the websites the user visits, according to Gimbal’s privacy policy.

So, for the next few days anyway, when you pass a phone booth on your way to the office, you may want to turn Bluetooth off on your smartphone, or you could be in for a not-so-excellent adventure in the future that Bill and Ted could never have imagined back in 1989. 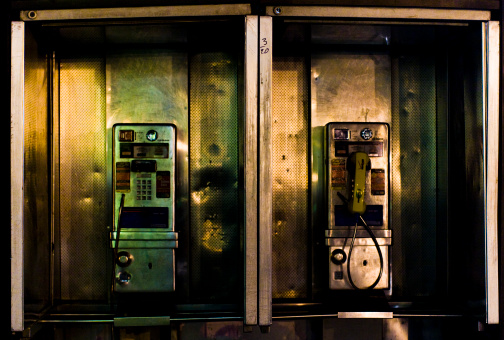