432 Park has topped out: the condo tower now takes the crown for tallest residential spire in the Western Hemisphere from One57, Crain’s reports. The World Trade Center still beats out 432 for tallest tower in the city, but only by its communications mast; 432 Park actually has higher occupied floors.

Of course, it’s unlikely that any soon-to-be completed residential tower will hold boasting rights long enough to sell out, let alone see a full cycle of resales. JDS’s and Extell’s upcoming towers on 57th Street are poised to outdo 432 Park. It’s a small fall from grace, but a real one that calls into question boastful titles such as “Living Above it All,” which belongs to a New York Times story on a unit at the Time Warner Center that is poised to hit the market for $35 million. The three-bedroom three-bath “aerie” has a bathroom with a pewter sink, onyx floors and raw silk walls, as well as “dominant views west toward the Hudson River,” and is in the much sought-after “A” line, according to the Times, but wouldn’t “above most of it” have really been a more appropriate title?

But as The Times reports in a story about buyers who specifically seek to buy in the vicinity of major construction projects, being by bigger, better and fancier buildings—or a new subway line—has unambiguous advantages if you’re able and willing to hold onto an apartment for the duration. Of course, for the short (and not so short) term, it also means living with a great deal of racket. And requires, moreover, a certain openness to whatever the emergent neighborhood turns out to be. Says one recent buyer of a pre-war co-op on 34th Street: “I hear construction noise when I go outside, but it’s nothing I haven’t heard before. A need for bucolic silence is not why I live in New York City.”

And it’s only temporary, a fact of life that the manager of Grand Central’s Two Boots and Junior’s are now grappling with as they attempt to renew their leases with what Crain’s describes as very strong interest in the spaces from other food vendors.

Meanwhile, YIMBY has nabbed a rendering of the COOKFOX design slated to rise at 550 Vanderbilt Avenue, as part of the greener-looking, softer, more brownstoney “Pacific Park,” nee Atlantic Yards. As YIMBY notes, the masonry and pre-cast concrete facade of the new building is a sharp contrast to the very modern, urban look of previous residential towers.

Nearby Crown Heights may well be the hottest neighborhood in Brooklyn right now—at least it has the fastest rising rents—but as several events highlighted this weekend, it’s not all bougie cheese shops and meticulously-curated thrift stores. First, police dug up a body behind a rowhouse on St. John’s by Bedford, according to DNAInfo, which may belong to a man killed a decade ago; police commissioner Bill Bratton said that the tip about the body came from a federal drug investigation. Then, on Sunday afternoon, a 30-year-old man biking down Union Avenue near Utica was shot a killed, The New York Daily News reports. A dark SUV was seen fleeing the scene.

In other crime news: the interiors of two of Steven Croman’s buildings were defaced with motor oil, EV Grieve reports. Although Mr. Croman is one of the least popular landlords in the city, the motor oil has been primarily of annoyance to the tenants, which EV Grieve speculates may indicate not a disgruntled tenant, but rather an angry contractor.

Some of the most popular landlords in the city, meanwhile, might those willing to barter with tenants in exchange for rent. The Wall Street Journal talks to a few New Yorkers who enjoy free rent in exchange for doing odd jobs.

Which will probably only be a viable option for au pairs and maids if houses start selling for $6 million in Bed-Stuy. The current owner of 247 Hancock Street is a retired ad exec who bought the house with a $7,500 downpayment in the 1980s, according to Curbed, and restored it into single-family splendor from a SRO. But still. $6 million?

Zosia Mamet is hoping to make a healthy profit for a much shorter stewardship of her Bushwick building. Curbed reports that the Girls star has listed her mixed-use Flushing Avenue building for half-a-million more than she paid a year ago.

The State Teachers Retirement System of Ohio is looking to put as much as 49 percent stake in 590 Madison on the market, Crain’s reports, hoping to take advantage of a strong market. The entire value of the premiere Plaza District office building, which was constructed for IBM in the 1980s, is estimated to be approximately $1.5 billion. “It is a situation where we would be looking to gauge interest in selling a portion of the building, but we want to retain control,” said a spokesman for the retirement system.

Why bother picking china patterns and crystal sets for a wedding registry when what you really want is a castle?  Why indeed? So we might speculate George Clooney and new bride Amal Alamuddin concluded, given that the newlyweds have given themselves the very generous wedding gift of a 17th Century English country estate, according to The New York Daily News.

Last of all, The Atlantic has a quasi-comprehensive list of all the places that The New York Times has compared to Brooklyn. Which ought to provide a wonderfully useful guide for snarky bloggers such as this one. 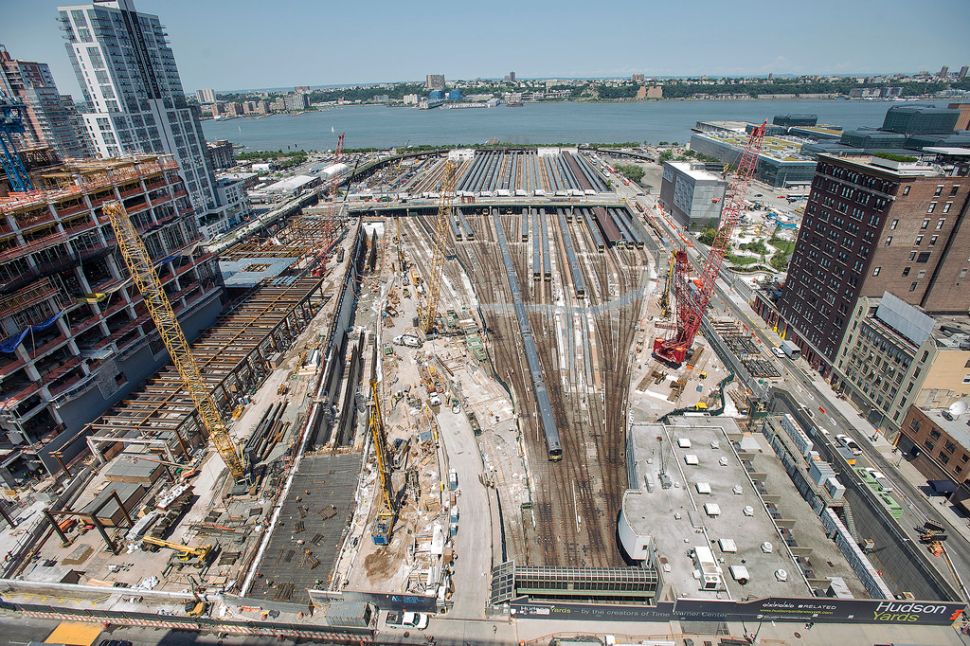