Despite a demonstration across from Lincoln Center featuring a speech from former Mayor Rudolph Giuliani—and interruptions from hecklers mid-performance—the Met premiere of the terrorist-themed The Death of Klinghoffer turned out to be almost completely about the opera, a flawed but fascinating work.

The protests, both outside and in, were against the perceived anti-Semitism of the 1991 opera. To my ears, though, any such bias, either in the music by John Adams or the libretto by Alice Goodman, is purely a matter of interpretation.

The basis of the piece is the 1985 hijacking of the cruise ship Achille Lauro by members of the Palestine Liberation Front. When the group’s demands were not immediately met, they shot disabled Jewish passenger Leon Klinghoffer and dumped his body overboard.

Such violent events would seem the stuff of melodrama, but what Mr. Adams and Ms. Goodman (guided by the work’s first director, Peter Sellars) produced is an almost plotless meditation on the origins of hatred and violence. If the lion’s share of stage time and the best music end up assigned to the Palestinian characters, that’s only fair: they are the conflicted protagonists of the drama. Whether they are also the heroes is up to the spectator to decide.

At least one spectator made his views clear. About halfway through the first act, just before the shimmering “Ocean Chorus,” a man’s voice rang out from the rear of the Met’s topmost balcony, “The murder of Klinghoffer will never be forgiven!” The protester chanted this slogan several times as various factions of the audience cheered or booed. After he was escorted out, a matter of less than minute all told, conductor David Robertson gave the downbeat for the next scene.

Appropriately for an opera focusing on a people instead of individuals, the musical highlights of Klinghoffer are the choruses, many of them extended and complex. The show opens, in fact, with a “balanced” pair of these pieces lasting a total of nearly 20 minutes.

“The Chorus of Exiled Palestinians” begins with a serene, almost lazy melody for women’s voices, ironically set to the text “My father’s house was razed / in nineteen forty-eight / When the Israelis passed / Over our street.” Gradually, though, the tempo quickens, the repeated figures of the accompaniment turn jagged, and eventually the stage swarms with angry militants shrieking “Let the supplanter look / Upon his work. Our faith / Will take the stones he broke / And break his teeth.”

In contrast, “The Chorus of Exiled Jews” maintains a slow, doleful mood throughout, a sort of group aria of despair. Ms. Goodman’s text is allusive, difficult to grasp, but the drift is that refugees arriving in Israel find her, the “Daughter of Zion,” like a former lover who is now elderly and covered in scars.

Director Tom Morris staged these undramatic choruses with abstract, ritualistic movement. A funeral procession gradually morphed into a riot for the Palestinians. Then, with a subtle onstage change of costumes, the chorus became Jews arriving in Israel in 1948. In a gently surrealistic sequence, they opened their suitcases and unpacked small trees. The bare stage flourished into a leafy grove, a metaphor for a promising future.

Less successful were numbers for the solo characters. Since Ms. Goodman structures the libretto as a series of recollections of the tragic events, the story is told rather than enacted. Many of these narrations are quite long and not easy to make interesting, since Adams indulges in the deliberate tempos and repetitive melodies that are a trademark of the minimalist style.

For instance, toward the end of the first act, the terrorist Mamoud passes the time of his watch on deck listening to sad pop ballads on the radio. They remind him of his youth, he says, when his mother and brother were killed in an air raid. Adams sets this horrific tale as a wistful aria, gorgeously sung in a honeyed bass-baritone by Aubrey Allcock.

The elegant Mr. Allcock struggled, though, to sustain interest in another musically similar aria that followed immediately after. Even Wagner sometimes had trouble sustaining a single mood for a quarter of an hour at a time, and Adams does himself no favors by choosing to set so much of this score in the narrow emotional gamut from “pensive” to “brooding.”

Then again, not many composers could be at their best working with the clunky lyrics Ms. Goodman churns out. She veers between the flatly banal to the portentously hazy with little that is eloquent or even singable in between. Marilyn Klinghoffer, anxiously awaiting the return of her husband, yammers unendingly about artificial hips; later, her grief evokes from the chorus the fancy-schmancy observation “The sun / which saw her waiting until dark to eat / has put her in the dark and made her verminous.”

An opera as uneven as Klinghoffer is in particular need of sensitive musical and stage direction to highlight its best features and paper over its flaws. Here the Met came through brilliantly. Mr. Robertson’s lithe conducting emphasized the dreamy romanticism of Mr. Adams’ slowly unfurling melodies, though he also built the pounding rhythms of the “Night Chorus” to an ear-splitting crescendo for the first act finale.

Director Morris, best known here for helming Broadway’s War Horse, framed the drama’s flashback structure as a reunion of some of the principals of the Achille Lauro incident, with each character addressing the audience to tell his part of the story. As the emotional temperature rose, the memories seemed to come to life, with the lecture hall setting morphing into the dining room on the ship where hostages kneel, terrified.

Mr. Morris’s only serious misstep was actually showing the murder of Klinghoffer onstage. A vital plot point of the second act is Marilyn’s ignorance of the fate of her husband, so this scene robbed us of sharing her moment of horrified discovery.

Among the singers, Mr. Allicock made Mamoud a most seductive terrorist with his silky voice and crystalline diction. Tenor Sean Panikkar rose to the challenge of the stratospheric tessitura of Molqi’s war cries. Bass Ryan Speedo Green lavished an almost too voluptuous bass on the vicious hijacker nicknamed “Rambo,” but he compensated with an uncompromising acting performance as an unrepentant monster.

Alan Opie’s dry baritone matched well with the character of the frail Klinghoffer, and he sang his philosophical post-death solo with solemn simplicity. Though Michaela Martens just missed making Marilyn Klinghoffer’s low-lying solos completely gripping, she brought a moving progression of emotion, from rage to numb pain, to her mournful closing aria.

In the massive role of the Captain, Paulo Szot did his best Met work to date, his bass-baritone steady and warm even in the most dramatic outcries. For a non-native English speaker, his diction was exemplary. In fact, the whole cast put over Ms. Goodman’s talky libretto so expertly that you hardly needed to glance at the subtitles.

The demonstrations at Klinghoffer dwindled after the first act, with the standing ovation at the final curtain marred by only few scattered boos. Not an inappropriate response, in fact, to the Met’s presentation of this imperfect, important opera. 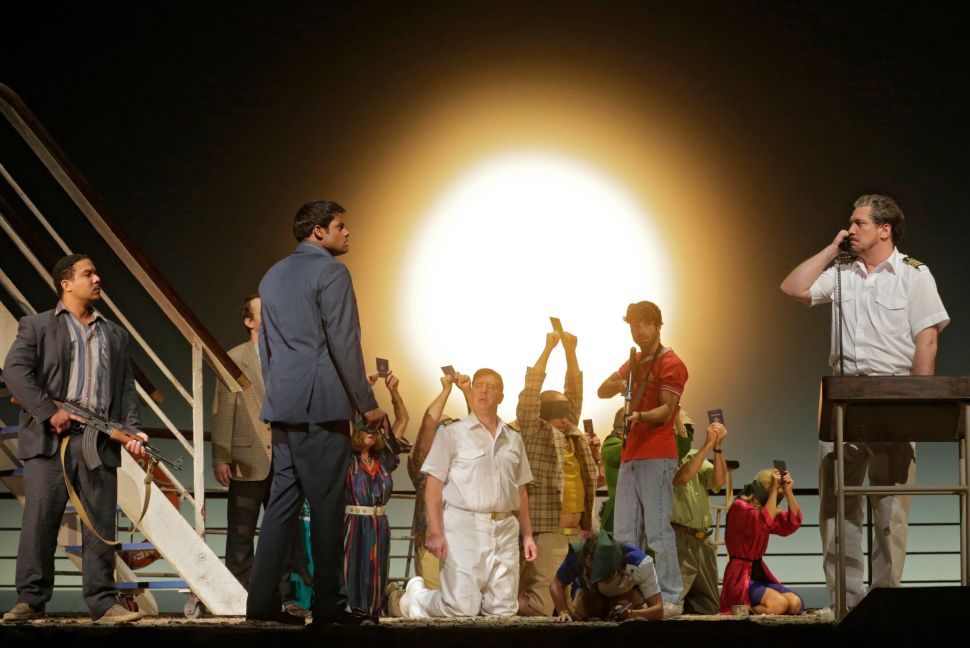