While this episode of Parenthood didn’t move like lightening the way the season opener did, it did advance the notion that the Braverman clan, like every real-life family, has a lot going on; some good, some bad, but none-the-less, all of it must be dealt with in a timely manner, no matter how confusing and/or painful.

Last week’s episode ended with Amber revealing her pregnancy to Sarah who could only muster a shocked, “Oh” in response.

Picking up right in that moment, our of shear dumbfoundedness of the news, Sarah, possibly to create some levity, asks how this happened since Ryan was badly injured and confined to a hospital bed. Amber rightfully ignores the inquiry and tells Sarah that she knows it’s crazy but she wants to keep the baby. Sarah musters a “good for you” but Amber doesn’t believe her and, frankly, neither does anyone watching this exchange.

Julia, in bed with her hot boyfriend, gets a call from Joel and for some unnecessary reason lies about where she is. Joel wants to discuss the email from Sydney’s teacher about some girl drama at school. When Julia admits that she knows nothing about the email, Joel explains that he talked to Sydney and she said it was no big deal.

As Adam and Kristina rush about their kitchen, they discuss the school kitchen and how they plan to meet the funky diet restrictions of every kid at their new school when the kitchen vendor is disagreeable.

Crosby, being creative, has all of the Braverman youngsters in the studio recording a song as a gift for Zeek for his 72nd birthday.

Cut to Zeek, nervously fidgeting in a chair, as his doctor lays out how serious Zeek’s heart condition is and that he really needs surgery. Again, Zeek is adamant that he doesn’t want this surgery.

When Sarah tells Hank about Amber’s pregnancy she laments that she handled hearing the news poorly. “She was so scared to tell me and I just froze,” explains Sarah. “I bet she dreamed of this wonderful moment when she tells her mom, and I let her down.” Hank asks Sarah how she really feels about the pregnancy and Sarah proclaims what could be the Parenthood mantra – “It doesn’t matter what I feel, she needs me.”

Kristina, trying to deal with the less-than-agreeable lunch vendor makes a mess of things and the vendor tears up his contract and quits — right at lunchtime – so Kristina calls Adam and tells him to hurry to the store and buy some lunches for the kids. Adam, with Crosby on his way to talk to Zeek about surgery, at first says no to the grocery store trip, but when Crosby says he can handle Zeek, Adam relents, but no before explaining to Crosby that he has to be firm with Zeek. Crosby, assures Adam that he’ll get the desired result when he talks to Zeek.

At Sydney’s school, Joel and Julie learn from the teacher, that Sydney isn’t the one being picked on, that Sydney is in fact been bullying a slight overweight little girl. When the teacher asks about trouble at home, Julie deflects, but Joel flat out admits that they’ve separated and it hasn’t been a good year.

Outside the school, Joel wants to talk about their situation but Julia blows up and tells him that he’s the one who gave up and for a year so begged him to talk and now he can’t just pretend that he didn’t destroy her. Joel utters a lame apology to which Julie responds that she can handle all of this, but she doesn’t know if the kids can.

Sarah apologizes to Amber for being in shock and wants to hear about Amber and Ryan’s plans for the baby. When Amber says Ryan doesn’t know, Sarah questions whether Ryan will want to be a part of this, be involved and help out financially. Amber gets defense and says she’s thinking Sarah doesn’t want her to do this. Sarah replies that she just wishing this wasn’t happening right now and the Amber has no idea how hard it is, but, she concedes that she believes in Amber to which Amber responds with a curt, “Good to know.”

When Crosby tries to convince Zeek to have the surgery, Zeek deftly explains why he doesn’t want to do it and very craftily brings Crosby over to his way of thinking.

Kristina tells Adam that she feels like she’s failing because of the loss of the kitchen vendor. Adam comes up with a plan that involves him leading culinary arts elective that will involve the kids learning about food preparation. While this sounds like a great idea in theory, Adam soon learns, in the very chaotic school kitchen, that it’s hard than he anticipated with Max calling him for essentially making the kids slave labor.

As Joel and Julia confront Sydney about what’s happening at school, Sydney yells out the phrase that every parent hears from his/her child at least once in their lifetime, “I hate you! I hate both of you!” as she storms off. Clearly, this ‘discussion’ did not go as Joel and Julia had hoped.

As Adam and Kristina prep another one of those often seen Braverman parties, this one for Zeek’s birthday, Adam pulls Crosby aside and thanks him for talking Zeek into having the surgery. Crosby admits that that’s not exactly what happened when he talked to Zeek. Adam, yelling as Crosby, shouts that Zeek is just not having the surgery because he’s afraid. With precise timing, Zeek and Camille walk in just in time to hear this from Adam. Awkwardness ensues and Julia jumps into talk about the sugar-free, gluten-free cake she’s made for the party.

Having had enough of the celebration, Zeek seeks solace in the garage, but a moment later Adam shows up to tell Zeek that everyone is worried about him. Zeek admits that he’s scared that he’ll die on the table during the operation to which Adam says that if he doesn’t have the surgery he could die….and choking up a bit whispers, “What do I do then?” Zeek, always quick on his feet with answer, replies, “You scatter my ashes in the park and play over me. I’m going out on my terms.”

After his discussion with Adam, Zeek finds Amber sitting on the stoop outside the backdoor. No sooner does he sit down beside her that she starts crying, hugs him and blurts out that she’s pregnant. When she asks him if he’s disappointed in her, he replies with a resounding no and proceeds to tell her that it’s wonderful, that when you get to hold your child, it’s magical. Then he grins as he says, “I’m going to be a great-granddad,” as Amber, smiling through her tears, realizes, “And I’m going to be a mom!”

When the pair comes back into the house, the party is in full swing. As the birthday song recorded by the kids plays, all of the Bravermans smile and seem to forget their troubles as they dance to the music in a slo-mo montage that’s become a sort-of Braverman signature scene.

After the party, Kristina tells Adam that the culinary arts class was actually a success as one of the student’s mothers called and said that her son loved working with Adam in the kitchen and learning about food.
Julia, after researching bullying online, calls Joel and concedes that she doesn’t understand what’s happening with Sydney. Joel agrees, and then there is a long awkward silence between them.

Sarah, surprising Amber at her place, shows Amber some pictures from when Amber was a baby. “I realized that I forgot to tell you about the good stuff,” admits Sarah, to which Amber responds that she’s scared. Sarah confesses that she is to, but that whatever happens, they’re going to be ok.

When Zeek tells Camille that he wants to talk, she get a bit nervous. He hesitates a bit but finally tells her that Amber is pregnant to which Camille says, with a chuckle, “Amber can’t be pregnant, Sarah was just pregnant with Amber. Wow. We’re going to be great-grandparents.” After letting that sink in for just a moment, Zeek declares that he’s going to have the surgery.

Even though it’s a bit early in this season, it seems clear that one of the themes of this final season is that there is a changing of the guard happening. Early seasons focused on Sarah’s struggles with motherhood and now she’ll no doubt be teaching her child how to be a mother. And, even though viewers might not actually see her in action with her grandchild as the season may end just at Amber gives birth, there’s still something sweet and intriguing about the thought of Sarah as a grandmother. Having said that, one can only hope that there are some moments before the final episode that highlight the addition of the fourth generation Braverman.

Even the locale of Zeek’s birthday party signals that there’s a major shift taking place within the family dynamic now. In the past, most Braverman family gatherings had taken place at Zeek and Camille’s spacious abode, but now that they’ve downsized and taken up residence in a much smaller place, it seems to fall to eldest sibling, Adam, to take over in that area.

Adam may have to assume a role larger than just party host if Zeek’s condition prevents him from being the supportive figure he’s been in the past. Last week, when Camille first heard about Zeek’s collapse at the casino in Vegas, her second call was to Adam. “Adam will know what to do,” she said at the time. Adam has stepped up for his wife, during her cancer treatment, to support her new school; for his son, who’s Asperger’s syndrome challenges everything he does; and for his brother, for whom he provided gainful employment when his vagabond lifestyle needed to come to end when he suddenly became a family man. Adam seems to be a rock for everyone in his life which may make what’s happening with Zeek that much harder on him, as he may soon realize that, try as he might, he can’t be all things to all people. If that’s one of the paths that will be explored this season, then there’s plenty to stick around for.

Whatever the case, next party let’s hope the Braverman’s buy a cake rather than subjecting themselves to Julia’s concoction, which turned out to be atrocious, because, well, every party deserves a delicious dessert, no matter who your family is, or what you’re going through. 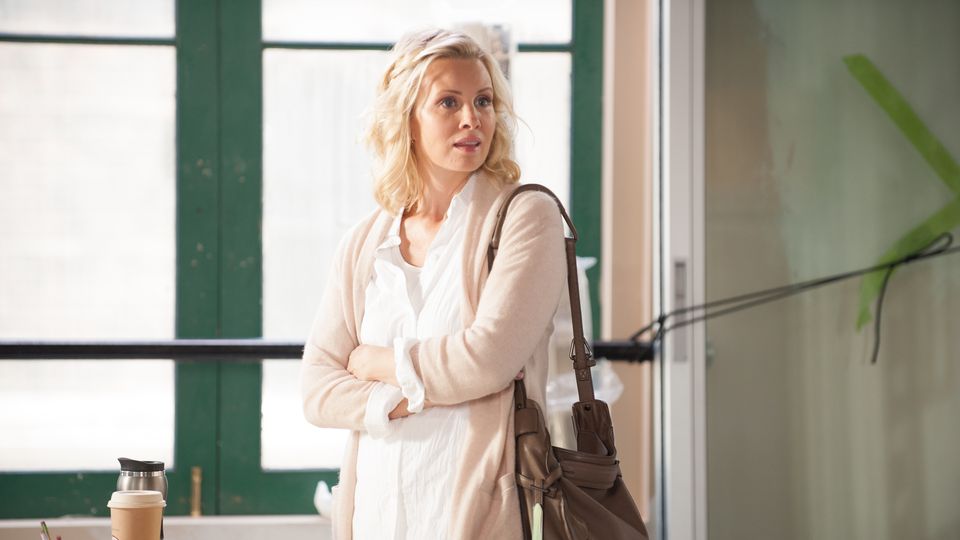