If Parenthood were a movie, we’d be at the mid-way point of the feature and in traditional film style all would be lost for the hero or heroine and viewers would be wondering how does he/she get out of this?

While this episode of Parenthood wasn’t that catastrophic, there is a big sense of everyone being quite lost at this point.

If there were an award for most clueless Braverman, year in and year out that would go to Amber. While baby shopping with Drew, the reality of the cost of a child hits her like a ton of bricks at which point she asks her employers, Adam and Crosby, for the most ever ill-timed raise. See, Adam and Crosby, having lost their most coveted, and really only, client at the studio, are facing completely losing their business.

Given his history of scattered employment, closing The Lunchonette is particularly sobering for Crosby as he realizes that if he loses this venture he’ll lose his house as well. He and Amber both assume that Adam, the businessman in the family, has a plan for this scenario.

While Adam worries about the future of The Lunchonette, Kristina is home concerning herself about how Max’s crush, Dylan, has begun insinuating herself into the Braverman family as she constantly plays with Nora and manages to be around for mealtime on a daily basis.

Seeing his sister and her predicament with her job and lack of funds, college freshman Drew freaks out a little, in a strange, calm Drew-like way mind you, and decides that he must declare a practical major immediately.

The only Braverman not struggling with money in this episode is Sarah, who is fraught with her boyfriend Hank’s daughter, Ruby. The rebellious Ruby wants to go to a party but Sarah says they should have a game night instead, which, of course ends disastrously with Ruby storming out of the room when she and her dad fight over the game ‘Celebrity.’

What turns this episode from pure downward facing drama into something a bit more hopeful is the fact that each of the Bravermans, while each facing their own trials, reaches out to someone, whether by choice or circumstance, and learns something positive about handling their personal matters.

When Drew decides to declare his major, he talks to Adam and Crosby about it. Adam encourages him to chase his dreams while Crosby puts the kibosh on that telling Drew to be practical. In the end, Drew chooses Economics as his major, telling his girlfriend that he doesn’t have anyone to float him if things go badly for him; he’s all he has. And, it seems like the little brother is looking out for his big sister when he also states unequivocally that he has to be there for her as well.

The two couples, Adam and Kristina and Crosby and Jasmine, facing money crises, each handle it a bit differently. When Crosby reveals the direness of the money situation to Jasmine for the first time, she’s more upset that he didn’t tell her how bad things were until now. She convinces him that she’s in their marriage for the long haul, but fans have to wonder if Crosby is, as he seems to not handle pressure well and has resorted to some childish behavior lately, like motorcycling riding against his wife’s wishes. But, he did step up when he had to do something every parent hates to do; disappoint your child. It seems Crosby had promised Jabar a trip to Harry Potter World in Florida for his birthday but with the current financial situation, the trip was out of reach. When Crosby breaks the bad news to Jabar, it’s a scene as hard to watch for Jabar’s disappointment as it is for Crosby’s.

Over at Adam’s house, Kristina simply says that some payments have bounced, which Adam kind of shrugs it off. He seems far more confident about the whole business situation than Crosby does, maybe given that he has had success in the past and believes he will again. That is until he has a moment with Amber in which he tells her that he values her work and really wants to give her a raise, but admits that while everyone thinks he has this amazing backup plan, he has no such thing.

Kristina appears to be letting Adam worry about the money while she concerns herself with Dylan’s overall intentions with regard to the Braverman family. As Max is trying to get Dylan to move him up from a two-and-a-half on the Scale of Affection, she seems more interested in just being with the family by watching movies with Kristina and wearing Haddie’s pajamas when she spends the night. Yes, she’s spending the night! She’s told Kristina that her parents are working out of town for their business and doesn’t want to be alone. Kristina did try to verify this but not very hard and gives in whenever Dylan asks to stay for dinner, and the night.

This whole Dylan’s-parents-are-continually-out-of-town thing seems a bit suspicious, but maybe Kristina’s ok with it because she’s missing Haddie a bit. But it’s a safe bet that something more about this situation will come out soon.

Amber’s big moment occurs after the debacle of game night as she sleeps on Hank and Sarah’s couch and a drunken Ruby stumbles in. Amber doesn’t lecture the girl, she simply takes Ruby through the steps of being drunk sick and explains that while Hank and his rules may seem like a pain, at least he’s there trying to be a good parent, something Amber’s father never even attempted. He just split.

This subtle speech makes Ruby, after recovering from a hangover, awkwardly apologize to Hank and Sarah for ruining game night. She even goes so far as to hug Hank. He relishes the moment but immediately asks Sarah how long this good vibe will last, to which Sarah responds that he should just celebrate every victory, no matter how small, as it comes.

That could really be said for all of these people. Their triumphs are often few and rather small, but that’s just how life is, right? So, well done there, Parenthood.

Next week it looks like a huge episode for the couple missing this week – Joel and Julia.

There may be no triumphs in this episode as their marriage may very well come to an end, but again, that’s just how life really is.

Just seven episodes of Parenthood remain. Celebrate those small Braverman triumphs as they come, there clearly aren’t that many left. 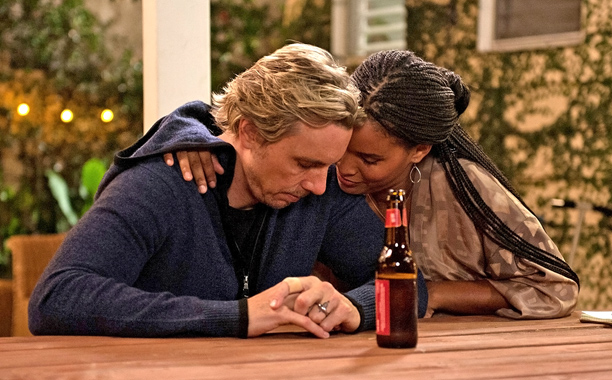