A message to Paris: Paul McCarthy’s butt plugs can be deflated, but they will not be defeated.

Here is the artist’s visceral response to last week’s attack. At the opening of Tree an angry member of the public struck Mr. McCarthy three times in the face, and the installation expresses a similar magnitude of aggressive disgust. Through a succession of dimly lit rooms, the tunnel takes you into the recesses of a sinister chocolate production line turned mad house. Over the rows of chocolate sex toys that fill endless metal shelves, exceptionally large chocolate gnomes are displayed partly lifted from their man-sized molds along with various abandoned factory equipment. And then there’s the projected footage of the artist continuously scrawling the commentary he heard of his own work, including phrases like “EAT SHIT,” “STUPID FUCKER,” and “ARE YOU THE ARTIST??” He repeats the last phrase again and again as a single appalled grunt, and it all culminates in a derelict circular bedroom illuminated solely by projections of the manic scribbles.

The grunts are unnerving enough, but coupled with the never-ending spine-tingling screeching of a sharpie marker on a white board and the pungent cloud of chocolate aroma, the whole experience is rather is nauseating. The faint of heart would choose an open-air inflatable butt plug to this experience any day.

The chocolate statuettes in production are available for purchase at the exhibition gift shop and luxury concept store Colette for €50, and the exhibition is open through January 4.

Inside #PaulMcCarthy "Chocolate Factory." It's like that episode of "I Love Lucy" if she and Ethel were making #buttplugs @newyorkobserver 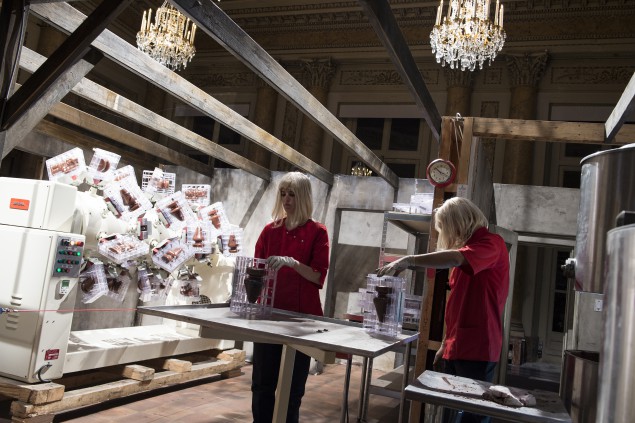