It’s always nice to see someone like Peter Marino walk into a fancy party, like he did at a dinner in his honor given by Design Miami Tuesday night, with all the suits and swanky dresses. This is because Peter Marino—the architect responsible for dreaming up most of the world’s high-end boutiques, who is also a designer, muse, motorcyclist and major collector—eschews anything that could be called “fancy” in favor of leather on metal on leather. His outfit for the evening: a leather vest pricked all over with metal studs, leather wristguards with metal spikes, a leather hat with a metal skull, a strand of leather hanging from his neck which holds some metal knives, leather belt, metal belt buckle, metal knuckles with skulls, leather pants, leather boots. All the leather is always black.

He’s a great person to honor with a dinner, because he comes complete with three different modes of personality. Sometimes he prefaces everything with a long “Dude…” and sometimes he affects a strong British accent for no reason in particular. He also likes to refer to himself in the third person—not as “Peter,” as one might think, but as “The Pedro.”

And then there’s his art collection. He’s got a thing for Renaissance Bronzes—he’s got 36 of them. He’s bought scores of Warhols, hordes of Hirsts, and many, many Mapplethorpes. Peter Marino owns so many Anselm Kiefers that Anselm Kiefer refers to Peter Marino’s house in Aspen as “The Anselm Kiefer Museum.”

And this—this collection as loud as his outfits—is the reason for the dinner where he can totally disregard any sort of dress code. In December, the Bass Museum of Art in Miami will open “One Way: Peter Marino,” the first major review of his mammoth collection and his contributions to the world of fashion, architecture, and design.

More on that in a second, but first I have to describe my first interaction with Mr. Marino, at the dinner Tuesday. You see, the star architect was not always the jet-setting man in black, the dynamo creator of designer stores, the guy ensuring that the ritziest of retailers could corral the shopper’s eye directly to the products upon entering the store. He was once Pete Marino from Queens, living in squalor and worshipping Warhol, who gave him his first work and exposure.

“Dude… I’m just inviting all my friends for a free meal!” he said, swinging one leather-clad arm toward the two tables. (This would be Dude Peter, but he switched to British Peter later in the night, and other people were worried if The Pedro would come out, too).

“I just ate at Tad’s Steakhouse for 11 years,” he bellowed. “99 cents a steak! I would just inhale them, and then I would go and stuff them in my pockets, just stuffing all these steaks in my pockets.

Here he made some furious swooping motions with his arms toward himself, as if stuffing his pockets full of steak. His current pants were way too tight to have pockets, but the extra-beefy mental image of steaks in leather pockets was a nice one.

“When Tad’s closed, I starved for two years,” he went on. “Look, dude… when people ask, ‘Isn’t it nice to have money?’ I’m like, dude… that was like two years ago!”

The dinner continued on well into the night, and then, the next morning it was more Marino: he gave a chat in the offices of Peter Marino Architect, which naturally is very, very high up in a Midtown East building. My ears popped on the elevator zooming up, then I was lead past Warhols and Tom Sachs-drawn guides and Han Dynasty vases and Richard Princes and so on and so forth. He was talking about “One Way: Peter Marino,” and once again he had on more leather than all the biker bars in Detroit, and once again he was surrounded by guys in suits, and it didn’t matter. At least he called upon British Peter for the occasion. (Wherever was The Pedro, I wondered.)

It was an attractive room, with models and drawn plans for private home commissions—homes in Lebanon, Star Island, Southampton, Sagaponack—and a view of that much-questioned skyscraper, One57, as cranes bring materials up to its peak.

Mr. Marino went about describing what sounds like it will be one of the most talked-about things going on during Art Basel Miami Beach. There’s a room of Marino-designed bronze boxes, the walls all made of black leather. There’s a multi-part opera that Mr. Marino made in collaboration with Francisco Clemente and the House of Christian Dior.

Also in the mix was Jérôme Sans, the co-founder of Palais de Tokyo in Paris and former editor-in-chief of L’Officiel Art, who curated the show. He was video chatting in from France, as one does.

“I’m going to give a physical walkthrough of the show and then Jérôme is going to make sense of it all,” he said.

He began by showing off the catalog, which had along its spine—what else?—a black leather clasp studded with metal.

“Just in case the people didn’t know who the show was about!” Mr. Marino said.

There are five commissions in the show. The first is by Gregor Hildebrandt, and it’s on the outside of the building.

“I was like, how can that go over the outside of the building? Because I’m not crazy about the way it looks,” he said, to the slight consternation of Silvia Cubina, the executive director of the Bass Museum, who was standing right next to him.

The Hildebrand work is a giant portrait of Mr. Marino.

He ran through a few more plans for other rooms in the exhibition—a lot of Mapplethorpes, a skeleton wearing a lot of leather called Peter Marino in 100 Years—and then turned it over to Mr. Sans, who began speaking of the show in his own style, one that was slightly more elliptical than that of the punchy, loud Mr. Marino.

“The show has this life, and this presence, this skin, and it is going into the future, and the future cannot exist without the past,” the floating head of Mr. Sans said.

“I love hearing that the show actually makes sense!” Mr. Marino said at the end of Mr. Sans’ remarks.

Then, before everyone was to walk back out through the Hirst-heavy hallways and pieces of antiquities at every corner, someone asked which artist he first bought when he began collecting.

“Warhol,” he said, in that put-on British accent. “I know that sounds very chic and all, but I was working for him, and he gave me a painting. He helped me out. One day he gave me a check and said, ‘If you’re smart, you won’t cash that, because my signature is going to be worth more than the check itself.’ But I was broke, so I cashed it. And what do you know! Andy was right.” 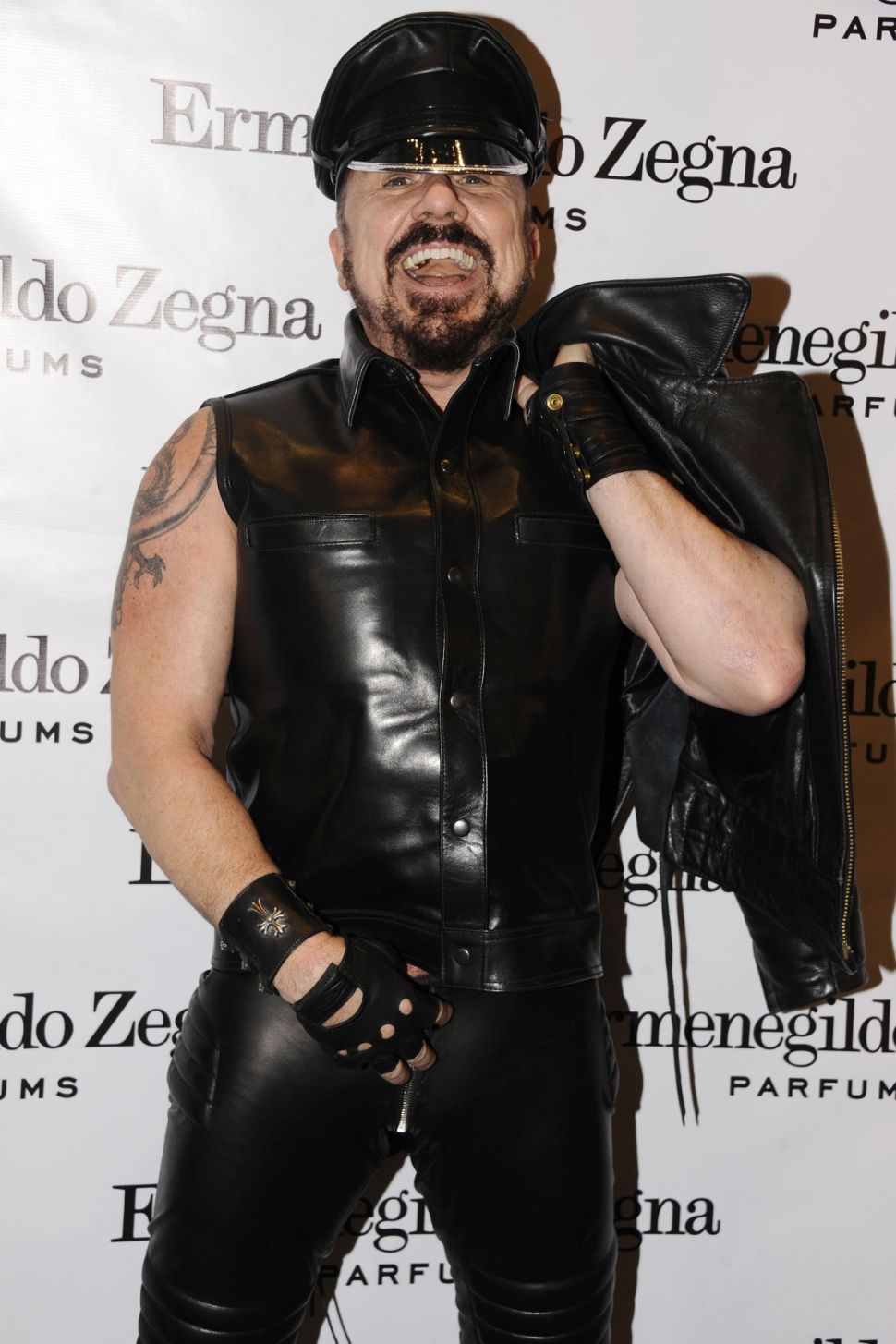