Shindigger spent the better part of the last week determining if the social set was on top of the battle of the smartphones. “I have a simple phone. I don’t do apps. Nothing at all,” said Carolina Herrera as we sipped Nicolas Feuillatte in a quieter corner of Verdura’s Fifth Avenue showroom for the 75th anniversary of Duke Fulco di Verdura’s bijoux.

The next day Robert De Niro and the world’s wealthiest man, Carlos Slim, were with Icon awards at the Friars Foundation Gala at the Waldorf Astoria. “This hotel was sold for $2 billion today,” emcee and dean of the Friars, Larry King, announced during the beginning of the dinner. “To Carlos Slim that’s chump change,” he quipped.

“I am on the list for the iPhone Plus,” admitted comedian Joel McHale inside the ballroom. “I’m literally going to fly to the factory in China and wait outside,” he jested. “I think it’s the Walkman transistor radio of our time and I need it!”

“You’re the best kisser in the business,” cooed the gorgeous Sharon Stone during her turn on stage. “In everything you do you’re a standup guy,” she enthused to Mr. De Niro. “I have tremendous gratitude for you.”

When Harvey Keitel finally handed his best friend the plaque, Mr. De Niro was short on words. “I was stunned and humbled when I was told they were presenting the Entertainment Icon Award to me,” Mr. De Niro said. “It was especially humbling because they didn’t ask me until I had already bought tickets!”

Before the night concluded, he dedicated his award to his dear friend, Robin Williams.

“No one made me laugh like Robin,” he sadly reflected.

The next evening, Shindigger ventured downtown for a dinner party for the New York Film Festival premiere of Clouds of Sils Maria, co-hosted by Moncler, W Magazine and The Cinema Society.

“It was a gift as well as a discovery,” explained Academy Award winner Juliette Binoche about the film as we sipped a potent Lillet cocktail at Omar’s in Greenwich Village. “You never know what’s going to a happen. Every day I was living a dream,” she said, praising her director and fellow actors.

As surrounding attendees snapped pics on their iPhones of her co-star Kristen Stewart, Shindigger asked Ms. Binoche if she was eagerly anticipating the an iPhone 6 upgrade.

“I’m going to being playing Antigone,” she replied in her sweet French accent. “The more I see everything going forward and being so modern the more I want to go backwards,” she giggled on the topic of iPhones.

At a luncheon for The Judge, which follows Robert Downey Jr. as a powerful Chicago lawyer who returns to his childhood home to defend his estranged father (Robert Duvall), on the subject of one smart phone versus another, Mr. Downey, looking dapper in Dsquared2 and A.Sauvage confessed, “I couldn’t care less,” then quipped, “I’m an HTC guy. I am endorsed by them,” he chuckled. “I’ve never had an iPhone I could really work.” 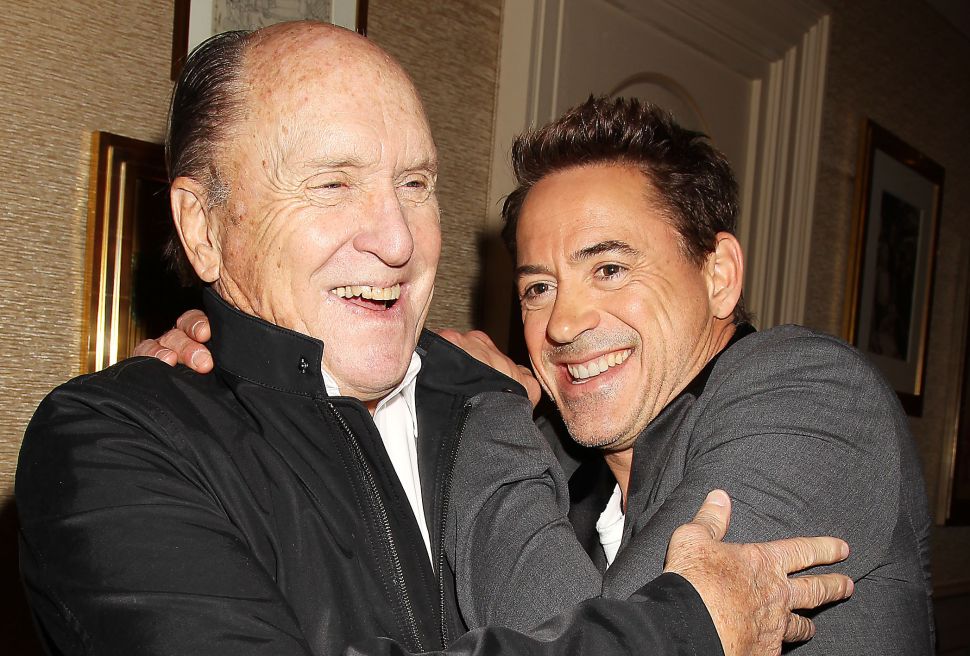