The Lowline is the manic pixie dream girl of city planning ideas. A sci-fi fantasy world so drastically removed from the trials and tribulations of participating in everyday life in the city (taking the subway, for one thing, trés provincial) that only the tragically hip, pompous, pampered celebu-rich set could seriously believe it to be a brilliant plan for revitalizing a neighborhood’s natural splendor. A hermetically sealed park? Didn’t we read about one of those in the latest Sharper Image? How kitsch! Now we won’t even have to share traditional sunlight with anyone making minimum wage, or step in someone else’s dog’s shit! Have we really already reached the Demolition Man stage of our cultural evolution?

In 2009, the dream was born: the Lowline. Transform the neglected Williamsburg Bridge Trolley Terminal into an underground park. Construct a “remote skylight” above the subterranean space; use a glass shield above a parabolic sunlight collector to reflect sunlight, concentrate it at a single focal point and guide it underground via a helio tube; channel the “necessary wavelengths” of that sunlight by way of fiber optic cables onto a reflective surface on a “distributor dish” beneath the streets and transmit it into the cavern, allowing plants to grow amidst the forgotten cobblestones and intertwining rail tracks—presto, underground park. The Lowline, just as simple as that.

As far out as that may sound, the Lowline is inching ever closer to becoming a reality. James Ramsey, owner of Raad Studio, and partner Dan Barasch, the creators of the project, are progressively making steps in the right direction.

Recently, a group of nine politicians, including New York Sen. Chuck Schumer, Assembly Speaker Sheldon Silver and Manhattan Borough President Gale Brewer, sent a letter to the New York City Economic Development Corporation asking the organization to start a dialogue with the MTA about turning over control of the former Williamsburg Trolley Tunnel to the city. In the letter, the elected officials touted the Lowline studies conducted by HR&A Advisors and Arup, which they said showed that the underground park had the potential to create “at least $15-$30 million in economic benefit to the city by way of increased sales, hotel and real estate taxes and incremental land value, and would create 560 full-time equivalent jobs during construction,” according to Lowdown.org. Converting the decaying space beneath Delancey Street, argued the signers of the letter, could revitalize retail in the area, and attract more tourists and residents to the neighborhood during daytime, something that’s long been an issue for the nightlife-inclined LES.

The Lowline founders said the news “represents a key milestone: our elected officials getting involved in helping make the Lowline happen, and aiming for progress during the last few months of the Bloomberg administration.”

Indeed, passion for the project is spreading throughout the city. At the Lowline’s third annual “anti-gala” on October 8, an event that drew everyone from Girls star/creator Lena Dunham to filmmaker Spike Jonze and LCD Soundsystem’s James Murphy, New York City Deputy Mayor for housing and economic development Alicia Glen explicitly declared Mayor Bill de Blasio’s support, calling the planned 60,000-square-foot park “the city’s next great public space,” the first time anyone from the de Blasio administration has publicly endorsed the Lowline plan, according to the group.

Messrs. Ramsey and Barasch claim to have presented “plausible evidence” that the team can make this plan a reality, and believe they will have convinced the MTA to give them the space and be able open the attraction in 2018. But as auspicious as all these developments may appear, the project still faces a number of hurdles, both financial and philosophical.

There is also that little unfortunate issue of persuading the MTA to hand over the property, convincing Gov. Andrew Cuomo to endorse the project and the looming question of how the park can sustain its own maintenance costs as a privately owned and operated entity—Messrs. Barasch and Ramsey believe they can make the park operate self-sufficiently. The $2.4 million-$4 million required for yearly maintenance will come from sponsorships, concessions and event rentals, they say. However, as the Observer noted just last year, collecting that seemingly lowball figure is an incredibly difficult task; while private donations fund large portions of both the High Line and Central Park, the parks department still contributes funds to both parks.

And, oh yeah, the cost to actually build the thing, reported to be anywhere between $42 million to $72 million. While the Lowline claims it will find around $55 million on its own, that’s a lot of money, and still foots the city with a hefty bill for the remainder.

But even if the Lowline can raise those funds, and the MTA eventually acquiesces, it doesn’t necessarily mean that they should.

What’s that, you ask? You say you’ve never heard of the DPN? Well, as evidenced by both a cobwebbed Yahoo Answers question as well as an entry on the aptly named unvisiteddallas.com, the DPN is so underutilized and notoriously unloved, many locals don’t know either.

Dallas attempted something similar to the Lowline with its horrendous Dallas Pedestrian Network, designed by Montreal urban planner Vincent Ponte.

Privately owned, with a tiny segment owned by the City of Dallas, the Dallas Pedestrian Network was created in the 1960s as a solution to alleviate the congestion of downtown and a means for separating pedestrians from car traffic. The DPN was created by linking already existing tunnels beneath downtown skyscrapers beginning in the city’s Main Street district and sprawling across an area more than two miles long, eventually evolving to include elevated walkways and street-level pedestrian malls by the late 1970s. The DPN cost private investors $31 million and the city $8 million, according to a report from the Dallas Morning News.

Many, including Dallas City Manager Mary Suhm and former mayor Laura Miller (who, in a New York Times article from 2005 referred to the DPN as “the worst urban planning decision that Dallas has ever made,”) hold the subterranean space responsible for killing the prosperity of downtown, the pockmark of a city built on pockmarks.

Retail floundered as public interest dwindled and the tunnels went almost entirely vacant by the 1990s, serving today as a grim reminder that Logan’s Run likely isn’t the best source of inspiration for city planning.

The aims of these projects are different, but it’s virtually impossible to imagine the long-term effects playing out too differently. What’s stopping the Lowline of the future from becoming nothing more than another flash-in-the-pan flavor of the week, even after it’s built?

New York is a world city, a guiding light city on a hill for all others to look to for innovation, and we’re really thinking of investing millions on an idea so fiendishly outlandish it makes Tron seem plausible? Vancouver, another world city many look to as an innovator, has had “explicit policies against pedestrian networks since the 1980s,” not exactly underground parks, yes, but there are also other, more practical concerns to consider as well.

What about the acoustics in the Lowline? Wouldn’t sound just be trapped in the space, making the park as loud as a traditional subway platform? What about the heating and cooling aspects? Are we really going to pay to air condition and heat a park throughout the year, or, if we don’t, is anyone going to use this thing when it’s 95 degrees in August or under 2 feet of snow in February?

Or perhaps the most practical concern of all: New Yorkers already spend more than an hour and a half on public transit every day on commutes to and from work, according to the Partnership for New York City—that’s roughly 24, 960 minutes underground every year. Does anyone seriously want to spend more time underground in this city?

Here’s an idea even more innovative than the Lowline: Imagine an oasis of green, resplendent nature amongst the tyrannical, towering urban sprawl. A place where anyone can find respite from stepping through litter-filled gutters, the choke of human traffic on the sidewalks—what Frederick Law Olmsted referred to as a park. A dedication to both egalitarian ideals and social consciousness, a natural space free for anyone to enjoy, regardless of any perceived notions of money or class, and oh yeah, in nature.

Or perhaps an even more revolutionary idea: refusing to suck on the teat of corporate real estate development and engage in a renewed commitment to the ideals Olmsted prized above all others when he was planning the greatest park in the world for the greatest city in the world. To say no to New York’s draconian rule of clutter, visual, aural and physical, and actually gift New Yorkers something of tangible value, not just to feed their deep-seated need to feel like they’re living out The Jetsons.

If hipsters really want a progressive city planning initiative they can hold up as the torch light of future, they should look back to one of their hipster forefathers, that rhapsodic poet with a tumbleweed beard so pronounced it could engulf Fleet Foxes’ entire fan base: Walt Whitman.

“Others may praise what they like,” wrote Whitman, “But I, from the banks of the running Missouri, praise nothing in art or aught else, Till it has well inhaled the atmosphere of this river, also the western prairie-scent, And exudes it all again.”

Missouri? Western prairie-scent? Ah, fuck it, what does he know—he’s never even been to an anti-gala. 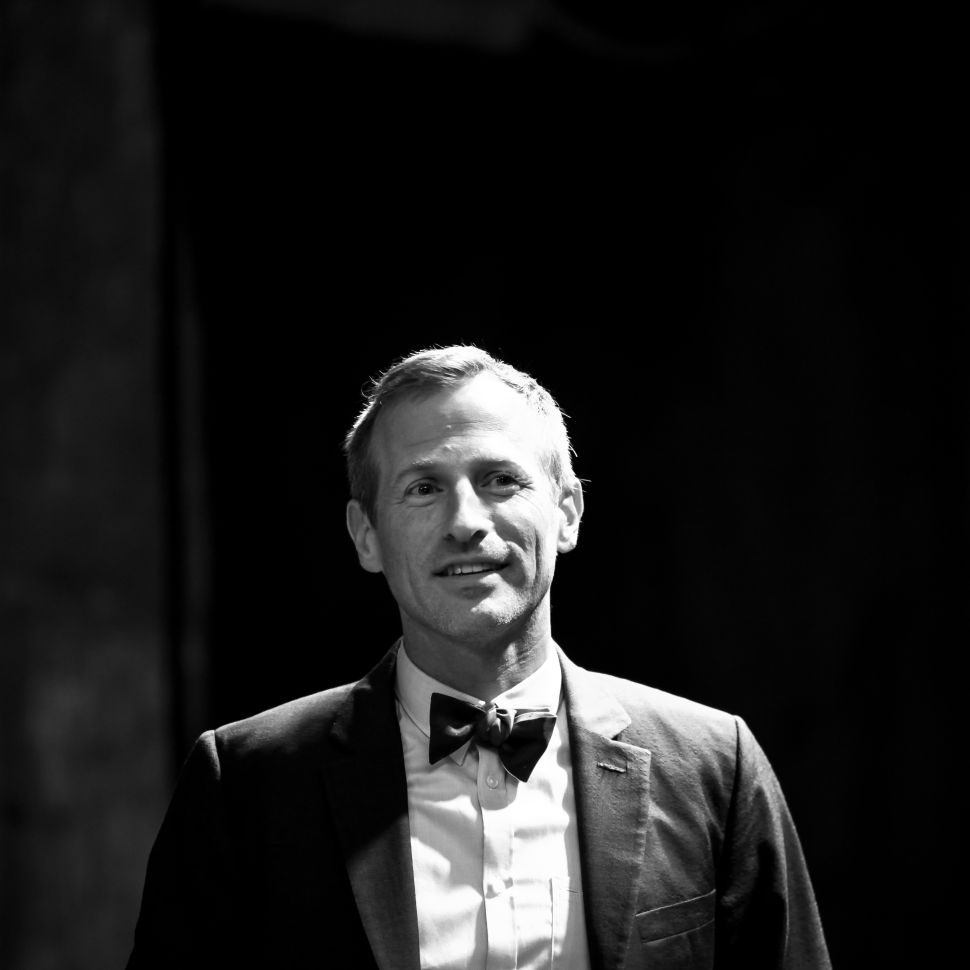