Ask litigator Andrew Miltenberg how he decides whether or not to take on the idiosyncratic clients that fall outside his bread-and-butter business litigation practice, and he’ll give you a couple of answers. First, he’ll point you toward Pastor Martin Niemoller’s famous condemnation of German intellectuals for failing to speak out against Nazism when they still had a chance. (“First they came for the Socialists, and I did not speak out—because I was not a Socialist …”)

Second, he’ll reference his own stature—at just 5-foot-6, he’s always been one of the shorter guys in the room. The two come together neatly in what might be termed a personal-political symbiosis. “From an early age,” he says, “I decided that I was going to stand up and be counted, and that I was going to look out for the little guy.”

That’s how, in 1997, he came to represent artists suing New York City over the right to sell their work on public sidewalks. (They won.) And how, in 1998, he represented a landlord who was refusing to allow Madonna pal Ingrid Casares and reputed mob associate Chris Paciello to assume a lease at 16 West 22nd Street so they could open an NYC outpost of their Miami club, Liquid. (The landlord prevailed.) And how, in 2002, he represented parents of students at Battery Park City’s P.S. 89 outraged at the Board of Ed’s plan to reopen the school just five months after 9/11 in light of potential health risks. (The two sides compromised.) And how, in 2014, he is emerging as the go-to lawyer in campus rape lawsuits—representing the accused.

Mr. Miltenberg insists his decision to sue a number of universities on behalf of male students who have been suspended or expelled following sexual assault accusations is not inconsistent with any of the above. He’s already filed four lawsuits—against Vassar College, Columbia University, University of Massachusetts Amherst and Drew University—will file several more before month’s end, and is consulting on 20 or so appeals at the college disciplinary level. In each, he is suing the schools for violations of the Title IX gender-parity law of 1972, contractual claims, unfair trade practices, as well as a number of tort claims.

If you feel like you’ve been reading more about campus rape of late, that’s because you have—most recently in a New York magazine cover story in September. The trend has been gathering steam since the U.S. Department of Education’s Office of Civil Rights sent a letter to colleges nationwide on April 4, 2011, mandating policy changes in the way schools handle sexual assault complaints, including a lowering of the burden of proof from “clear and convincing” evidence to a “preponderance” of evidence. Not surprisingly, there has been a marked increase in women coming forward with such complaints.

That doesn’t bother Mr. Miltenberg at all. The man is not pro-rape, for God’s sake. What does bother him is the way that many schools have handled the complaints.

Every single one of the men he’s representing, Mr. Miltenberg argues, has suffered egregious due process violations in closed-door college hearings. (He also believes that his clients are innocent of the charges against them.) And that is how he has found himself in the decidedly impolitic position of not only defending those accused of rape, but also suing on their behalf.

Impolitic, perhaps, but he’s also in good company. Twenty-eight current and retired Harvard Law School professors recently sent a letter to the university asking it to abandon its new sexual misconduct policy, arguing, as Mr. Miltenberg has more generally, that the new rules violate the due process rights of the accused. “This is an issue of political correctness run amok,” Alan Dershowitz, an emeritus professor, told a Boston Globe reporter.

Mr. Miltenberg didn’t go looking for these cases. Indeed, the first one landed in his lap and the inquiry wasn’t even directed at Mr. Miltenberg. In early 2013, Peter Yu, a student at Vassar, was at a loss for how to defend himself against accusations of nonconsensual sex—and even thinking of suing his accuser for defamation. The only problem? Not only did he not have a lawyer, he was a Chinese national attending Vassar on a student visa, and had no idea how to go about getting one. So he did what anyone in his position would do—he Googled “Asian-American lawyer.” That’s how he found the name of Kimberly Lau, a 33-year-old associate at Nesenoff & Miltenberg.

Mr. Yu called the law firm and insisted on speaking with Ms. Lau and no one else. She was curious enough to take the call and, after speaking to Mr. Yu and researching the issue, she concluded that while he might not have a defamation case, he might have something else entirely: a suit accusing the school of violating Title IX. Ms. Lau convinced Mr. Miltenberg to take on the case and has been running point on most of the Title IX suits since. She acknowledges the potential legitimizing effect that having a relatively young female lawyer on one’s side might have in such cases but also claims gender blindness when it comes to her motivations for representing them at all.

“Yes, they’re male students,” she says. “But they’re also victims of a system they trusted, paid money to, thought would give them an education and help them on their way to establishing themselves in a career. That’s exactly what I did. And to see their futures being obliterated by a mix of false statements in the first instance but ultimately by the colleges themselves administering kangaroo courts … that’s highly offensive to me.” (In the Vassar case, the school refused to consider as exculpatory evidence Facebook messages from Mr. Yu’s accuser saying she’d “had a wonderful time” the night of the encounter.)

Ms. Lau and Mr. Miltenberg make an unlikely team—the short, scrappy New York Jew and the taller, more carefully spoken third-generation Hawaiian of Chinese and Korean heritage. But they are very much on the same page on this issue. Neither of them is saying that rape doesn’t have devastating and life-changing consequences for its victims. They’re simply saying that a mishandled rape accusation—especially if it’s unfounded—does, too.

Between the two of them, Mr. Miltenberg and Ms. Lau get about 10 calls a week from parents whose sons have been accused, suspended, or expelled. Too many of those calls, says Mr. Miltenberg, describe the same basic story: “The majority of them have botched the investigations, either on purpose because they’re simply pandering to the current political climate or because they’re not equipped to conduct them in the first place.”

In mid-September, for example, Mr. Miltenberg got a call from the father of a Division I wrestler in Tennessee who’d been accused of sexual assault. After a four-month investigation, the man’s son was found not guilty by college investigators. And then 24 hours later, the hearing officer had a change of heart. “Here’s how that probably played out,” says Mr. Miltenberg. “Someone got the hearing officer on the phone and asked them, ‘Are you out of your fucking mind? We’re not going to be the school that lets this kid stay on campus. Get him out of here for a year and when it quiets down, bring him back. We don’t need 100 women walking around here with mattresses.’ ”

He’s referring, of course, to Emma Sulkowicz, the Columbia University student who has become the face of what New York calls “the revolution against campus sexual assault.” She’s done so by protesting the “not responsible” verdict Columbia rendered against Jean-Paul Nungesser, the man she accused of raping her, by carrying a mattress with her everywhere. She has referred to the protest as performance art, and is receiving class credit for doing so.

Mr. Miltenberg, who is consulting for Mr. Nungesser, has choice words regarding Ms. Sulkowicz’s performance, and they’re not the kind that are going to win him any friends: “While drawing attention to the important issue of campus rape, she’s clearly enjoying the celebrity she’s created through the perverse spectacle of carrying her mattress around campus. But the attendant media frenzy has seemingly legitimized an event, which, after an investigation and hearing, the University determined did not occur—and which the NYPD has thus far declined to pursue.

“What has clearly been lost in all of this,” Mr. Milternberg continued, “is that she has achieved this celebrity status through a systematic campaign of publicly defaming and destroying the life of a young man. It’s absolutely mind-boggling to me that Columbia has sanctioned her conduct by giving her course credits, all after finding that the young man was not guilty.”

When I asked Mr. Miltenberg how he feels about the White House throwing its weight behind the wave of sexual assault accusations with the launch of the “It’s On Us” branding campaign in late September, he sighed. “When that happened, things went from bad to really bad for the position we’re taking. But I think people are ignoring the real—and terrible—impact on some people’s lives. Compare it to the capital punishment debate, where people are adamant that killing one innocent man is more tragic than all the arguments you can make in favor of capital punishment. Here, because the ramifications are not so severe as death, people seem more willing to put up with fact that some innocent people might get caught up in the rush to judgment. And that’s a very slippery slope.”

A self-described outsider, Mr. Miltenberg says he’s motivated as much by the desire to take on institutional hubris as he is to defend the wrongfully accused. “Look, I’m not a senior partner at Blank, Blank, and Blankety Blank. I’m just Andrew Miltenberg with an office across the street from Penn Station. But if you dare question the motives of an Ivy League School, you’re suddenly trapped in a room with a bunch of white-shoed guys with Roman numerals after their names. And they’re all harrumphing about the audacity of questioning anything they do. Well, we’re questioning them. And we won’t stop until the schools admit that they need to severely revamp their approach to handling sexual assault accusations.”

Or abandon it entirely: he thinks it should be up to the criminal justice system to handle campus complaints that rise to the level of felonies. “A school’s disciplinary board wouldn’t be dealing with a campus shooting, would they? So why are they dealing with sexual assault?”

Mr. Miltenberg has always been motivated by a bit of legal restlessness, and he insists that the Title IX lawsuits aren’t going to become the focus of his practice. “When the pendulum starts to swing back and this becomes a fairer process for those accused, then I’m done with it,” he says. “I have no desire to turn this into a full-time thing. If I did, I could have taken six more cases this week.” 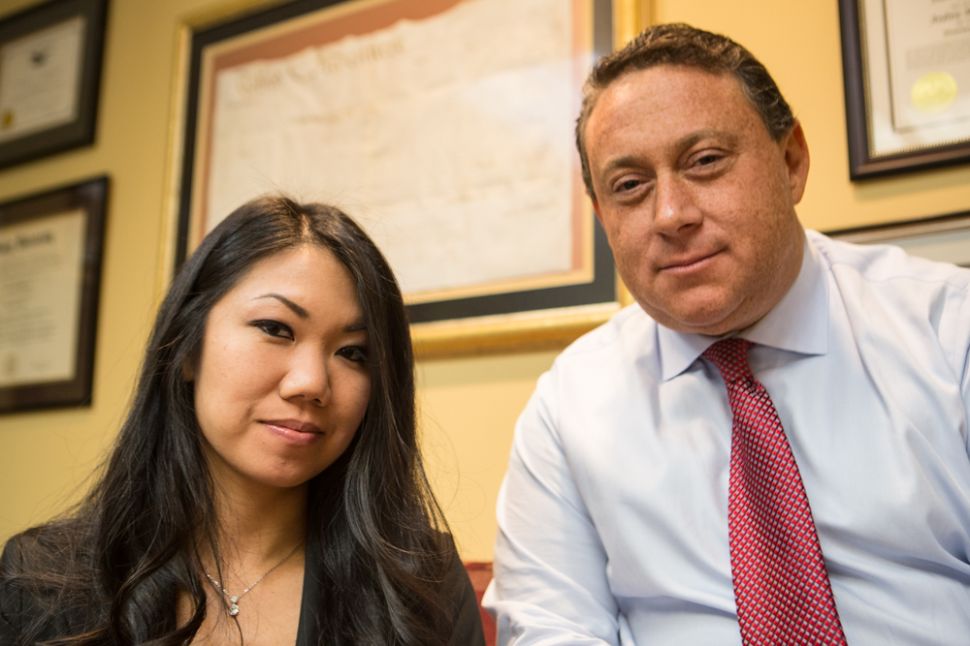