Last night, at coworking space AlleyNYC, a hundred or so members of the NYC tech community got together to hold the second monthly Product Hunt Meetup.

Never heard of Product Hunt? That probably just means that you’re not a techie (now is your opportunity back away slowly). A quick primer: Product Hunt is a site with a daily curated list of new products with a dedicated community of founders, venture capitalists, designers and programmers who comment on and upvote products.

Product Hunt started as an email list and has become a total sensation, recently drawing in $6.1 million in VC cash from Andreessen Horowitz. Members of the tech community have started tuning in to Product Hunt like they would their morning news — sometimes cutting out the morning news part altogether.

The Product Hunt event was, on the surface, indistinguishable from the other events in the early stage startup genre — craft beer, peppy bootstrappers, you know the drill. There was a session where small startups could pitch the audience and get feedback. After the pitches, Ryan Hoover, the young king of Product Hunt himself, was beamed in for an impromptu video AMA, and Nathan Bashaw, the guy who built version 1.0 of Product Hunt, gave a presentation about, well, product development.

If this is all sounding a bit strange — that there’d be a grassroots fan club to celebrate a website that is essentially a list of products — let it reflect how noisy tech hype has become. Many new tech products get attention because they got a major investment from a marquee VC, their idea is completely outrageous, or they have a great publicist.

Product Hunt is meant to cut through the bullshit. The people who use it are just dedicated to well-made things — upvoting tells the community who’s getting the most attention, and everyone is encouraged to try things out, share thoughts and give feedback.

“The better consumers are, the better products get made,” Mr. Bashaw told the crowd during his presentation. “It’s an ecosystem that feeds back into itself.”

For small startups, the amplifying effect of appearing on Product Hunt can be enormous. The event organizer, Harry Raymond, has his own app called Shindig. When Shindig debuted, it appeared on Product Hunt and the Today Show on the same day.

“A small community of 30,000 versus an audience of four million, and we got way more new users from Product Hunt.” Mr. Raymond told Betabeat.

The groups aren’t officially affiliated with Product Hunt — though they proudly bear the Glasshole Kitty logo — but Product Hunt team totally encourages the meetups, and provide guides and support on their blog for people who want to start their own.

“We personally think it’s fantastic,” Erik Torenberg told Betabeat. “I’m going to go to Europe at the end of the month to go to five of them in different countries.”

In-person meetups are really just an extension of what Product Hunt is: a safe haven away from media and mainstream hype where the tech community can get together, startups can practice pitching without media attention — this reporter excluded — and everyone can geek out.

One attendee told Betabeat that the event reminded them of a time before NYC tech blew up into a more mature scene with major institutional investors, back when people said things like “Silicon Alley” and New York was just a place where a handful of people were sitting around, trying to build little businesses and, ultimately, just trying to make cool stuff. 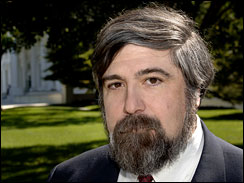