The Internal Revenue Service has placed a hefty tax lien on the home of Rachel Noerdlinger — the de Blasio administration aide who has been under scrutiny for her live-in boyfriend’s criminal record and comments about police.

Ms. Noerdlinger, chief of staff to Mayor Bill de Blasio’s wife Chirlane McCray, had a $28,190 federal tax lien placed on her Edgewater, New Jersey home in 2011, according to public records. A federal tax lien is placed on a property when a person fails to pay a tax debt in the proper amount of time.

New York State has also filed a tax warrant against a company owned by Ms. Noerdlinger, Noerdlinger Media Incorporated, for $1,368, according to public records.

“Rachel has worked with the relevant agencies to create a plan that will resolve these outstanding items, and we have no doubt she will do so,” de Blasio spokesman Phil Walzak told the Observer.

Ms. Noerdlinger has worked out a monthly payment plan for the debt and is up to date in payments.

Her attorney, Jeffrey Lichtman, said Ms. Noerdlinger’s tax situation is nothing unusual. (Ms. Noerdlinger herself did not return a request for comment.)

“The tax liens are for taxes previously owed. Rachel has settled these issues and is current with the taxing authorities on her payments for these debts.  She is not the first single, working parent who fell behind on her taxes and will not be the last,” Mr. Lichtman told the Observer.

Ms. Noerdlinger earns a $170,000 salary, a figure that turned some heads when she was first hired. While she works for Ms. McCray, Ms. Noerdlinger has also been a key advisor to Mr. de Blasio, particularly in the wake of the death of a Staten Island man in NYPD custody over the summer.

Ms. Noerdlinger — who formerly worked as a top spokeswoman for Rev. Al Shaprton — has been under fire in recent weeks after a story in DNAinfo revealed her boyfriend, Hassaun McFarlan, had been convicted of fatally shooting a teenager over a down jacket as a teen himself, and later charged as an adult with drug trafficking crimes. Police unions, no fan of Ms. Noerdlinger’s former employer, have seized on the issue, particularly in the wake of Ms. Noerdlinger’s visit with Ms. McCray to a CompStat meeting of police brass.

Since the first DNAinfo story emerged, other publications have noted risqué online postings from Mr. Hassaun about sex and violence and Ms. Noerdlinger’s son’s Twitter posts bashing white people and police, and have raised questions about a waiver she received to continue living in New Jersey.

The administration has stood by Ms. Noerdlinger, with Mr. de Blasio saying he had “full faith” in her and that she wasn’t responsible for her boyfriend’s words — despite the way his administration reportedly parted ways with campaign aide Lis Smith for dating Gov. Eliot Spitzer. 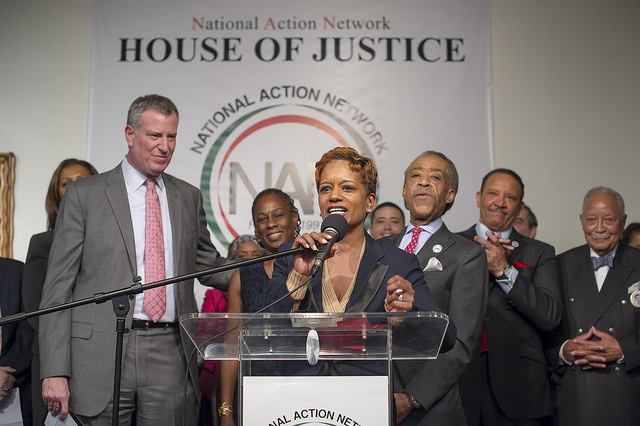