In yet another acrimonious showdown between Congressman Michael Grimm and Domenic Recchia Jr., the two recycled many of the same attacks tonight that have defined the bitter contest.

Mr. Grimm, a Republican, painted Mr. Recchia in the second televised debate of this race as an ineffectual, out-of-touch radical liberal. Mr. Recchia, a Democrat, appeared to find his footing after a series of recent gaffes, bashing Mr. Grimm for his his 20-count federal indictment and his alienation from the Democratic and Republican establishment.

“You’re in the minority of one,” Mr. Recchia twice accused Mr. Grimm, who lost much of his national GOP support after his indictment related to the management of a Manhattan restaurant before his election to Congress. “All I know is that Mr. Grimm has many problems, and every day it’s something new.”

The debate, televised on NY1 and co-hosted by the Staten Island Advance, was less disastrous for Mr. Recchia than the first televised debate of the race. Mr. Recchia, whose campaign has been partially defined by a series of verbal gaffes and a Daily Show lampooning, made few verbal flubs and brought a large contingent of supporters to the College of Staten Island, where the debate was held.

“I’m not the swift talker like my opponent but I get results,” Mr. Recchia said in a response to a question about his failure to explain last month the details of a controversial free-trade agreement. “I know how to work with people and I’m gonna do that when I’m the next congressman.”

Mr. Grimm mocked Mr. Recchia for telling reporters in September that his experience running a foreign exchange program qualified him to serve in Congress, where lawmakers need to take votes on complicated international matters.

“He talked about running an exchange program in my district for Japanese students. The reality is, he has absolutely no experience when it comes to crises like dealing with ISIS, the southern border,” Mr. Grimm said. “I’ve had a myriad of experiences.”

Mr. Grimm, a former FBI agent and Marine, repeatedly reminded the crowd he had served in the U.S. military. That, and his belief that Mr. Recchia is too beholden to the liberal establishment, underscored his line of attack in the debate.

“The bottom line is, I’ll take a Marine any day over a foreign exchange student,” he charged. When a moderator pressed him on the time he threatened, on television, to throw a NY1 reporter off a balcony after he asked Mr. Grimm about a federal investigation unrelated to his current indictment, Mr. Grimm had a similar answer.

“At the end of the day, I’m a United States Marine and I’m tenacious,” he said.

Mr. Recchia continued to straddle the fine line between the backing he is receiving from the likes of Mayor Bill de Blasio, a liberal Democrat relatively unpopular in the district, and the need to appeal to the swing voters who will decide this race. After initially mishearing a moderator and saying he opposed a minimum wage hike, he clarified that he supported President Obama’s call to raise the minimum wage to $10.10 an hour. But he argued that Mr. de Blasio’s ambitious affordable housing plan, unless it included more senior housing, would bring too much “density” to the sleepier borough.

The two rivals didn’t always disagree. They both backed Gov. Andrew Cuomo’s controversial policy to automatically quarantine anyone who has had direct contact with an Ebola patient (Staten Island has a large West African population.) And in a lighting round–to moderator Errol Louis’ apparent chagrin–neither could immediately recall the last book they read.

In the same lightning round, Mr. Recchia also revealed–like Mr. de Blasio–he smoked marijuana in the past. Mr. Grimm said he had not.

“Bottom line, all he’s been doing is prepping for these debates and he’s not qualified to handle these issues,” Mr. Grimm said after the debate. “After a year and a half of running for Congress, you should have studied up on the issues.”

“I feel good. I feel like I won, I feel like our message got across that the people want change,” Mr. Recchia said. 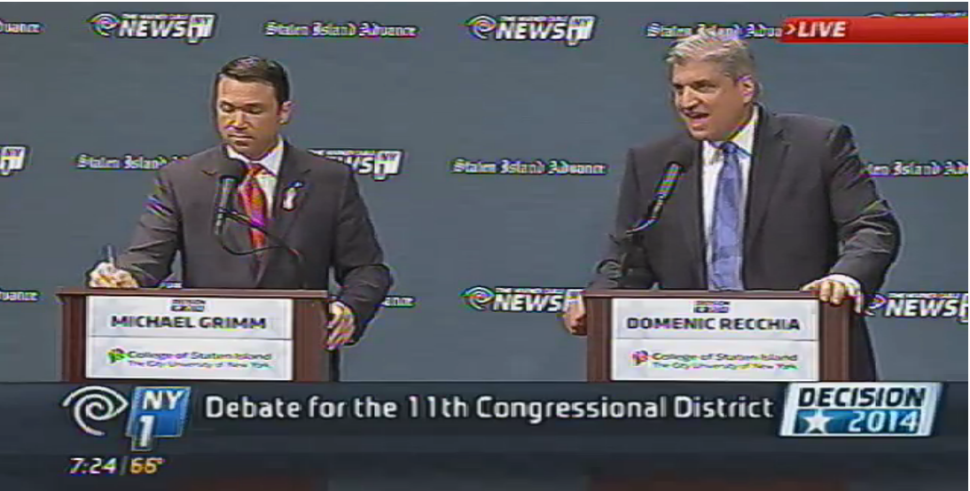