Remember in the early days of 90210, when Brandon would develop a drinking problem and then by the next week, his drinking problem was gone, or at least magically inactive after Dylan took him to one 12-step meeting? That’s kind of how “Drawn and Quartered” treats the plague. Maybe it was a 24 hour plague, assuming that was even a thing. I don’t know, I didn’t take AP European History in high school. I’m at the mercy of the Reign writers room and Mary Queen of Scots’ Wikipedia page like the rest of the viewing audience. Anyway, last week, a truncated form of the black death threatened to decimate France’s population and this week it doesn’t seem to be much of an issue anymore. If anything, it was a rather body-fluid heavy contrivance to introduce Craig Parker’s Lord Narcisse into the mix. Given the fact that Parker has the kind of gravelly yet nasally voice that genetically predisposes him to playing costume drama villains, he would have found himself in the mix sooner or later.

With the plague comes the return of King Francis and Lola, with bastard love child in tow. Although Mary is thrilled to have her husband and semi-thrilled to have the good friend who banged her husband behind her back home and free of running sores, the child is a stark reminder that despite all her power and agency, she’s still only as good as her last male heir.

Speaking of producing heirs, Francis and Mary’s reunion resulted in a tender love scene courtesy of all the passion the King’s 90 pound frame could muster and the 8 pm network time slot would allow. Despite the fact that we’re titillated by an entire exposed thigh, the bare patches in Toby Regbo’s sparse beard seem to unwitting steal the spotlight. Ugh. Lady boner killer.

Anyway, it’s probably no accident that things started going downhill for Hot Nostradamus the moment he shaved his glorious beard. After helping Mary with her plot to toss Eduard into a plague den, he and the guards who led the noble into the brick and mortar petri dish took the fall for what should have been a convenient way to silence an opportunistic noble. Lord Narcisse is calling for heads to roll, or in this case, for limbs to be drawn and quartered. Say what you will about all the rampant teen sex in all the other CW dramas, no one ever had their limbs tied to four horses on Gossip Girl. Way to inject a little actual dread into what is usually a fairly tame time slot. What may have been more painful than the moments immediately leading up to Hot Nostradamus’ aborted execution is the conciliatory visit from Catherine where she offers to erect a status in Sexy Nas’s honor instead of actually saving him from a gruesome end. There’s something more unsettling about Catherine when she’s taking care to save face while sugarcoating bad news than when she’s being outright conniving. Of course, all due credit goes to the amazing Megan Fellows and if there was any justice, this would just be the Catherine de’ Medici hour, since she is far and away the most compelling character on the show. She’s basically a corseted Amanda Woodward.

Fortunately, King Francis and Mary are able to bluff their way into brokering a deal with Lord Narcisse. It involves blackmailing Narcisse into admitting to his convoluted plot to murder a rival noble via his dead son in exchange for some land originally earmarked for the perpetually put upon Leith.

Leith, who just lost his new love to a wayward murder plot and earned the ire of his former benefactor Lord Castleroy in the process, has his life continually ruined by Greer and exists to be this show’s carbon based punchline.  If there was ever a Charlie Brown of the Renaissance, Leith is it, but I digress.

Although he is saved from certain death, in the episode’s most heartbreaking moment, Hot Nas is sent riding off into the sunset. Perhaps Francis would do well to salvage some of Hot Nas’s discarded beard trimmings and weave them into his own face in the hopes of achieving some of the towering prophet’s undeniable virility.  However, the Reign writers do not close a hot guy door without opening a hot guy window. That being said, Louis Condé is now a fixture of court, providing opposition to Lord Narcisse’s obvious villainy and to corruption in the Vatican as a whole. Because that’s what teens can’t get enough of, plotlines about corruption in the Vatican. In more pressing news, Kenna remarked about Louis Condé’s glaring hotness upon his arrival, sparking what we assume is a Chekhov’s panty drop for later in the season.

In other news, the criminally underrepresented Bash spent the episode playing ghost detective around one of the mass graves of plague victims, and one of the servants of Francis and Lola’s love child is apparently possessed by the spirit of the late King Henry? Because the plight of a doomed teen monarch amid constant undermining and power grabs isn’t compelling enough, the show has to go and hedge their bets with a bunch of spooks. As if Hot Nostradamus’s mere presence wasn’t enough to add a supernatural element. This is probably the same line of thinking that concluded that Abraham Lincoln’s real life accomplishments weren’t impressive enough. He had to spend his salad days hunting vampires. 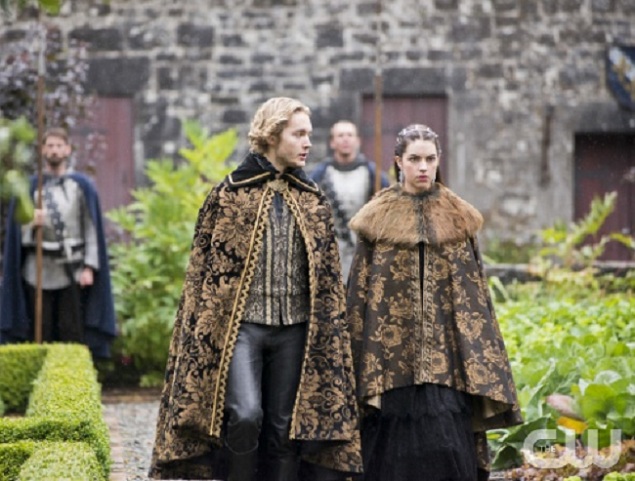