Given how anyone with a title can just roll into court and makes demands on or blackmail King Francis to do his bidding, I’m starting to think that being the King of France has all the power of being the mayor of a local McDonald’s on Foursquare. I know it’s a different country, leader and set of circumstances, but it’s also a vastly different representation of the power of a monarchy than say, The Tudors, when King Henry decapitated fools just for looking at him funny. In “Blood for Blood,” Francis finds himself in an increasingly common bind when he has to kowtow to Lord Narcisse in order to keep his reign and ultimately, his head.

Lord Narcisse put Francis into this diplomatic headlock by planting the seemingly possessed nanny into the care of Francis’s son in order to get him to confess to killing Henry. Although it’s kind of a relief that the nanny’s possession isn’t part of a hokey supernatural storyline, the overused plot point of regular people committing to full time ruses and cons that Academy Award winners would find challenging has always been a pet peeve of mine. See also Miranda Tate/Talia al Ghul in The Dark Knight Rises. Regardless, it’s Craig Parker’s superb acting that really saves what could have been an awkward and clunky plotline. Parker really sells the contrived fear and vulnerability and underlying manipulation when he does his planned walk in on Francis confessing to regicide. Narcisse also hits Francis’ achilles heel when he surmises that Mary would surely be put to death if the murder went public since the people of France would never believe that she wasn’t at least aware of it, if not an accomplice.

In any case, it’s clear that Francis is troubled and unfortunately, he has to exploit Mary’s crippling insecurity over her ability to produce a male heir as the cover story, thus making Reign the one teen drama where a teenager is upset over not being pregnant. Oh, what a difference 500 years makes.

Like any ambitious teen drama, Reign hits on the issues the other CW shows don’t have the balls to touch. Although, I can’t say I wouldn’t have loved to have seen The Carrie Diaries or One Tree Hill tackle tensions between Catholics and Protestants and the concept of religious persecution as a whole. A Protestant service attended by Castleroy is raided and burned down, resulting in the murder of a kid who just so happens to be the nephew Lord Conde was charged in protecting. Oops. Anyway, on behalf of the Catholic nobility, Narcisse parades a disabled boy through court that he claims is the victim of Protestant nobility. Knowing Narcisse, he probably maims kids for sport and then keeps a reserve of injured children on hand just for occasions like this.

Anyway, the Catholic offenders are rounded up and none of them are willing to talk until Mary threatens one with drawing and quartering, demonstrating for the thousandth time that she is a far more decisive leader than Francis could ever be. Anyway, the injured kid is a plant who just happened to have been kicked in the head by a horse. As usual, Lord Conde is pissed off.  Surprise, surprise.

In a really fun b-story, Kenna walks in on two ladies getting all Sapphic with each other, and is remarkably enlightened about their preferences since in an earlier scene, someone was actually murdered for practicing a frowned upon sect of Christianity. The women were apparently driven to experimenting with each other after reading an awesomely smutty journal detailing a mystery woman’s sexual exploits with the various men of court. Kenna adorably confiscates the journal from the women in order to protect them from said smut, but then runs off all giddy because she can’t wait to share it with Greer and Lola. Catherine joins in the gabfest when she reveals that she’s familiar with the journal and has already taken a few of the bachelors out for a test drive. Do go on, you minx. Anyway, the ladies use the journal as an important resource in the eternal quest to get Lola laid. Oh, it’s worth pointing out that the ladies also frolicked in a fountain like they were in the opening credits of Friends in the same episode where a church was burned down mid-service. Much like Degrassi, Reign also goes there.

There’s one mystery bachelor who is described as a total sex jock and he’s got a bizarre butterfly shaped birthmark. It’s Narcisse. Of course it’s Narcisse. He’s a complete bastard, so naturally he’s a beast in the sack. Plus, anyone who has seen his full-frontal scene in Spartacus knows Craig Parker is swinging pipe.

While Lola is courting who she thinks is the mystery bachelor, Narcisse swoops in with the world’s most shameless cockblock and offers himself to Lola as her next potential partner. Maybe he felt an actual connection to Lola after sharing a tender and confessional moment with her last week. Or maybe he needs an in when it comes to Mary. Or maybe he just knows she’s fertile and ultimately useful in his quest to produce heirs, especially since his last proposed baby factory tossed herself off a damn cliff. Either way, hopefully, we’re a couple episodes away from some exciting hate sex.

In other news, Greer marries Castleroy despite his admission that he’s a protestant. The wedding is a suitably gaudy affair that looks like it was financed by Catherine’s de’ Medici largesse. Also, predictably, Leith walks out of the nuptials. Conde reveals he’s been branded by those creepy devil riders, possibly setting him up to be persecuted as a heretic later on. Also, Leith ended up getting more screentime than Bash this episode. That’s just messed up. 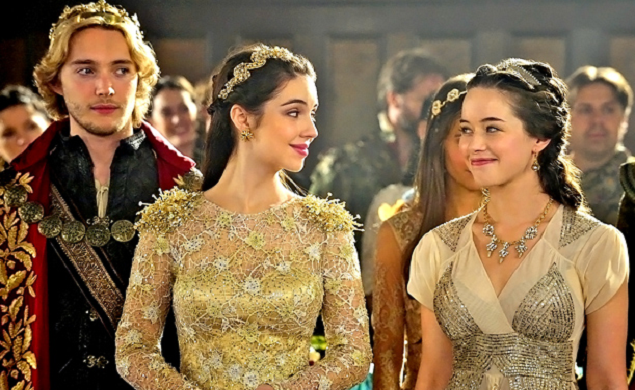