In “The Lamb and the Slaughter” Reign takes it’s pacing cues from  its time slot rival Scandal. Plotlines and developments that would typically play out into a several episode arc. For example,  Mary finally vents her pent up rage at Lola for sleeping with Francis and the rift is mended moments later when the two women bond over having to cover up Estelle’s murder of a guard. Apparently, nothing brings two women together like destroying the evidence in a grisly stabbing death.

You remember Estelle, right? The girl who helped Lola give birth only to be carted off in an actual cage by Lord Narcisse when her family was stricken by the 24-hour plague? Well, when we meet her again, she’s traded one form of captivity for another when she arrives to court as Lord Narcisse’s bride to be and looking like ever the shell shocked hostage that situation would call for.

Captivity is something that the women of Reign wrestle with in one form or another. Lola is encumbered by the fact that she mothered a baby out of wedlock and is saddled with the erroneous reputation of being the king’s mistress. Greer is still honorbound to her family to pursue the stability and comfort Lord Castleroy instead of the rather palpable passion she feels brushing against the eternally beleaguered Leith during the dancing scene at the Lola’s baby’s christening. In one of the series’ most effectively scenes, Leith and Greer managed to telegraph more arousal in their series of close proximity brushes and restrained grazes than all of Francis’s and Mary’s bedroom scenes combined. This is even more offset by the most awkward corset-ripping scene in history when Greer eventually goes groveling to Castleroy to take her back.

Oh yeah, Leith is back. Francis assigns him to assist Bash on his costume drama detective duties and the pair, along with Lord Conde, will no doubt become the Renaissance Ghostbusters. Don’t cross those streams, boys.

And as for Kenna, well, she’s still around.

This brings us to Mary, who is relishing in the security that a pregnancy and the prospect of a male heir affords her. This also marks one of the only times on television where two teenagers were absolutely elated at the prospect of one knocking up the other. Naturally, the two celebrate in bed, which leads to Catherine and her spectacular disregard for boundaries busting into the love nest to celebrate the good news that she had already figured out weeks prior. In-laws, am I right?

The horror of your mother or mother-in-law intruding on your intimate, post-coital moment. That’s a universal horror. A horror that transcends class, creed, geography and epoch. And it’s easily the most upsetting moment in a season that has featured corpses crusted over with running sores, plague victims with rotting extremities and an almost execution where a man’s limbs were tied to 4 horses. I mean, this screencap really says it all, doesn’t it?

Also, Catherine has never looked more radiant than when she was prancing around Francis and Mary’s bedroom, boasting about how she stole Mary’s urine to perform her own independant pregnancy tests. No one can sell a scene where a woman expounds upon the joys of human waste theft quite like Megan Follows. Plus, as much as it must suck to be exiled from Court, at least Nostradamus doesn’t have to sit around and fashion a pregnancy test out of rank herbs and horse pee.

Unfortunately, the joy is short lived as Mary miscarries in the very same episode. Although it’s not a surprise given how the real Mary and Francis never had kids, it’s still heartbreaking. Her miscarriage is made more painful by the fact that Mary feels obligated to put on a brave face during the christening scene.

As radiant as Catherine looked while celebrating the prospect of a new grandchild, she looked absolutely wan and ashen as she stumbles upon the ghost children who are threatening to bring a reckoning on the denizens of the court. This happens parallel to Bash aka supernatural Lenny Briscoe and Lord Conde, investing a 16th century X-File involving a  shepherd who murdered his family on behalf of some demons? Frankly, all the storylines involving paganism and the supernatural really don’t hold a candle to the constant plotting, bed hopping and politicking. there’s gotta be a better use for Bash then just sending him off to chase spooks. Plus, Lord Narcisse’s raspy voice straight out of the Michael Wincott School of Villainous Emoting is far more menacing than some half-assed ghoul.

Speaking of Lord Narcisse, this episode took great pains to humanize the season’s presumed big bad. A disturbing trail of dead wives turned out to be the result of childbirth related deaths in the mad scramble for an heir. Or at least, that’s what I gather from his heart-to-heart with Lola. He outlines a failed journey to a male heir that further illustrates the point that Eduard was far too close in age to Craig Parker to be his son. No, I will never stop harping on that. He also reveals that his motive for marrying Estelle was to save her family’s land and protect her from her own suicide attempts in exchange for another chance at an heir. Except it’s too late for any of that since she hurled herself off a cliff offscreen presumably to meet the visions of her dead family that were waiting on the rocks below. Bye Estelle. It was nice sort of, but not really getting to know you.

Lola posits to Lord Narcisse that he has never been in love. Come on, Lola, that’s seriously the least of that guy’s problems. Although I love the fact that the writers are showing a sympathetic side to a character that has been nothing but dastardly, I also can’t help but think they must have something truly evil in store for him.

The episode ends with Francis reminiscing with Mary about when they used to sneak out of the castle together as children and watch fireflies. Then Francis pledges his devotion to her by recreating the firefly effect via a vast network of lanterns. It’s a really sweet moment.

It’s so sweet, in fact, that it almost makes you forget that Francis is going to die soon. 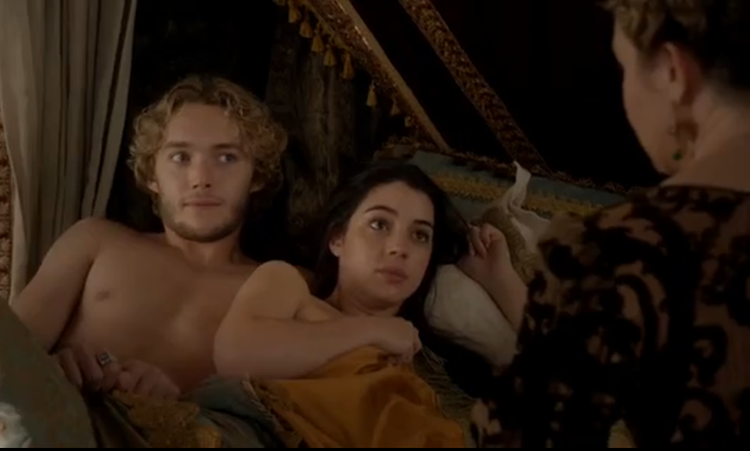