After Emily’s near stabbing, this week’s Revenge picks up with Nolan and Em figuring out who else wants her dead again. Nolan begs his bestie to go to the cops, but is as uncomfortable as everyone else is calling Jack one and refers to him as “police adjacent.”

It seems Nolan suffers from a combination of night blindness, beard blindness, and selective amnesia. Seriously, how was the intruder not familiar to you at all? Hint, hint: He made you successful. He made you responsible for his daughter. He’s why you have enough money to dress like the male equivalent of Carrie Bradshaw. He should trigger your memory.

David attempts to shoplift at a drug store and fails. Maybe boosting just isn’t as easy as it was the last time he was above ground, but after the chain incident it seems like he’s intentionally getting caught.

Daniel and Margaux are starting to seem like they genuinely care about each other, but there’s a hot redheaded shoe about to drop name Louise. Daniel seems like a guy who wants to do the right thing, but is too weak from the pampering of past wealth to always do it, especially when it comes to babes.

Margaux seems to have pure intentions, which means she’ll end up as collateral damage down the road. If she doesn’t get killed off, she’ll definitely get her heart broken. Either way that lunatic Louise will be to blame. It’s clear she is crazy and out to get Victoria, but it’s not clear what she’s trying to do other than bang her estranged son. Daniel is suspicious of her intentions, but she is as persistent as she is busty and will wear him down.

Charlotte is still on a strict diet of drugs, but now changing things up with her mother’s Xanax. That might actually be the medicine she needs, as her character seems increasingly reasonable. She’s calling out her mom’s manipulation involving Emily and her father, and might be moving over towards team Em. It’s funny how Char seems more sympathetic to Emily’s situation, yet not at all remorseful for trying to kill in a fire her two weeks ago. Still, Charlotte is looking more and more like Emily’s best shot at an ally, which is quite the likeable twist for cocaine’s best customer.

Officer Ben is losing tall he likability Char is gaining in his pursuit of Emily’s intruder case. Ben is more suspicious than flirtatious with Em this episode, and even asks Jack, “Does she hate cops or something?” You know, kind of like a rapper.

He’s demeanor throughout the entire episode basically says, “I don’t know what’s going on, but I’m going to be a huge douche about it.”

Emily is brought in to look at a lineup of possible intruders, most notably her undead dad. It’s a powerful moment when she first see’s him, and even more emotional than when her husband shot her on their wedding day. Ben continues his annoying investigation, as Emily silently copes with the possibility that her Dad came back to life to stab her. So, Ben is now officially the worst.

In police custody David proves to be just as good at playing the victim as his girlfriend. Learning she’s no longer the only master manipulator, Victoria is going to have to work harder than she thought to gain David’s trust. But it’s possible he still believes Vicky on one thing – the fact that his daughter Amanda is dead.

After seeing how close David and Amanda were through flashbacks, it’s shocking that the adult version of her sparks no parental instincts whatsoever. He was once the high functioning patriarch and matriarch of his small family, and now it’s like he’s the dopiest as a sitcom dad ever. Or if he actually knows Emily’s identity and is playing a twisted game with it, then it makes sense why he’s totally Victoria’s type.

Emily justifiably unravels further after her Dad goes public at press conference with Queen V by his side. Charlotte is with him as well, making her Em’s only hope and a potentially new anti-hero for season. As for the future of the Clarke family, well, hopefully they’ll break their bad habit of assuming each other is dead. 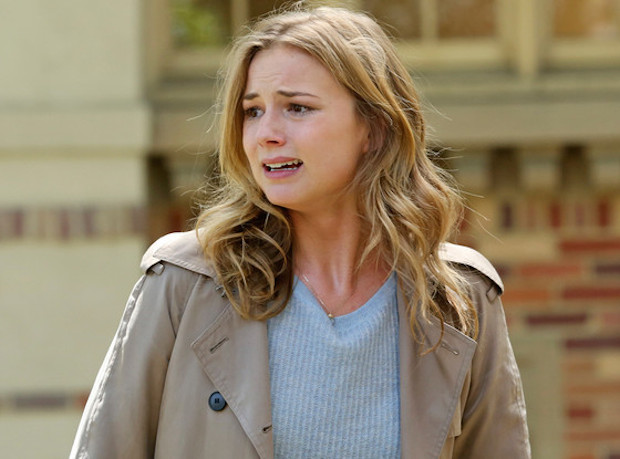