Last week’s Revenge premiere picked up with a recently un-dead David Clark, a revenge intervention with Emily (a revengervention?), and Charlotte turning into Scarface except with more cocaine, so last night’s follow up episode had plenty of plot to play with. Everyone is out for vengeance this season including the audience, who according to Twitter, widely wants to retaliate against Margaux’s hair stylist.

Episode two opens with our favorite Queen Victoria, who may be free from the mental institution but is still very much captive. Only this time it’s by her former man-mistress she thought was stabbed to death in prison. A dream sequence of her and David basically choke-kissing only makes it harder to figure out if Victoria is into it. Her terrified escape clarifies this, but a sufficiently creepier David doesn’t let her go easily. His gross beard is just part of a pattern of bad judgment, as he still loves and trusts Victoria.

Daniel and Margaux team up to settle the score with her awful brother Gideon, who supposedly corrupted Charlotte even though she was choosing drugs over hugs back in season one. The first phase of this plan sets Charlotte up to catch Gideon cheating on her. The only problem is that Margaux and Daniel assumed Char would react like a normal human being. Instead of crying over a pint of ice cream, Charlotte does more cocaine and then tries to jump off a building.

Charlotte has been put through the wringer. The guy she thought was her dad framed her real dad as a terrorist, her boyfriend was killed because of her shady family, and her mother is a raging sociopath. After all that, it just takes a slime-ball like Gideon to drive her over the edge? Really girl, have a little perspective. Luckily Em is there to stand in the wind watching.

Jack comes to Charlotte’s rescue because he’s a cop now, and even though it doesn’t make total sense timeline wise it’s nice to see a good guy with a gun for once. Jack takes a standoffish approach, serving and protecting with his radio mostly. Instead his partner Officer Ben proves to be his braver half, tackling Charlotte off the ledge and later alluding to a romantic interest in Emily. So now we have a cop courting little Miss Revenge, who also works with Jack. What could go wrong besides everything?

In a moment of sensitive weakness, Emily decides to save Charlotte by coming clean about who she really is. Thinking that it would make a difference, Emily confesses to being her biological sister. Much like her estranged husband Daniel, Emily assumed Charlotte would respond reasonably and that all the uppers were out of her system. Neither presumption proved to be true, and she hulk smashed Emily’s revenge box. This was not the sweet Clarke sister reunion Em arrogantly anticipated.

Meanwhile David and Victoria are still catching up in his dank, dark layer. For a second it seems possible that Victoria loves him, until she finds out that he thinks Amanda is dead and not just posing as Emily. She lets him believe that, confirming that the evil, manipulative Vicky we all love is alive and well.

This doesn’t stop David from trying to build trust between them, confessing to Conrad’s murder over breakfast at a diner. They hold hands and presumably share a milkshake after we cut away. They’re reunited and it officially feels so good, or so it seems on David’s end. It’s possible he knows the truth and is just playing her. It’s also possible that he just hasn’t touched a woman since the 80’s.

Margaux finishes her sib-on-sib revenge solo, planting cocaine on Gideon before he boards a plane, though judging from his character probably had his own drugs on him too. Gideon gets arrested and Margaux celebrates by throwing herself at Danny. Revenge is served best with French kissing between two people with confusing accents.

“Charlotte’s right. I chose revenge over her,” Emily later tells to Nolan about the sister bombshell. But in her defense, have you met Char? She takes being awful to new levels luring Emily to the Stowaway, clubbing her unconscious and setting the place on fire. If that is how she reacts to news about her biological family, just think how she’ll handle her father being alive. Judging from the previews for next week, Em will survive the fire and likely return thinking, “I should’ve chose revenge.” As always. 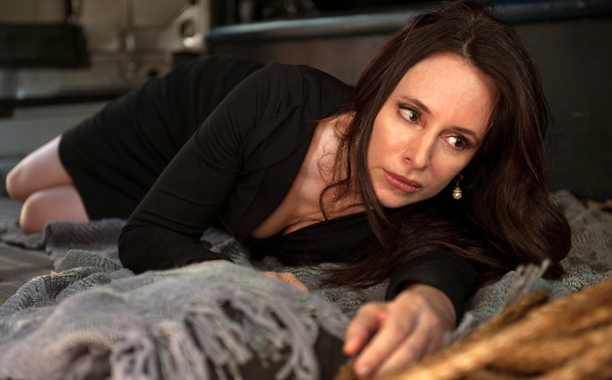