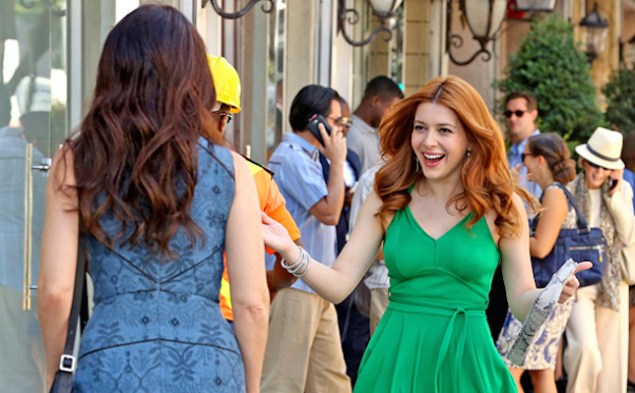 “Hi honey, I’m home!” Louise Ellis is out of the looney bin on Revenge. (ABC)

Last week’s Revenge closed with Emily unconscious in a fire, all courtesy of her coked up half-sister Charlotte. Em coming clean to Char was debatably a good deed, but punishable no less. Usually opting to cause distress rather than being a damsel in it, Emily isn’t typically the one being rescued. But this does conveniently set up the hot cops in her life, Jack and Ben, to save the day.

Jack comes through and in an equally amazing feat, manages to spark no sexual chemistry in a literal fire with his childhood crush. At this point I feel like Charlotte and Daniel have a better shot with Emily, and they both tried to kill her. No worries, Officer Ben is still DTF if she ever gets over Aiden’s death. Tough break, Jack.

Meanwhile a relationship of convenience is budding between Daniel and Margaux (whose hair seems to have responded to criticism since the premiere). But the more complex rekindled relationship is David Clarke and Victoria’s. This bunny and her bearded Clyde shack up in a vacant lake house. David is increasingly trusting and easy to manipulate the more he’s exposed to windows, natural lighting, and the scent of a woman. We get it, man.

Jack attempts to pick up the pieces at a newly charred up Stowaway. A witness informs him that he saw Charlotte leaving the scene of the fire and Jack makes the exact face Charlotte made when she realized he kidnapped her last season. It’s weird.

Victoria is on the hunt for cash and encounters a new babe, nemesis, and potential sex partner for her son Daniel (he’s into red heads, people). It’s Louise, her pawn from the mental institution who’s probably pretty pissed about Queen V’s escape. And if Louise was insane enough to land in the same institution, she might have more surprises than just boring old vanilla revenge.

Vicky finds Charlotte and learns she tried (and failed) to kill Emily, and it was like the afterschool special mother-daughter moment they never had. Victoria uses this to wrap Char and David further around her finger by uniting them as a family. The reunion is cut short because Charlotte’s immediate reaction to meeting her newly not-dead dad is to take a nap.

Charlotte was catching on to the lies Vicky told David, as if she expected honesty from her mother. Charlotte has never been good at remembering how awful Victoria can be. A good rule of thumb is that if she is acting maternal at all something terrible is about to happen.

Charlotte’s nap is cut short, and Emily sniffs her out as fast as Victoria learns to use a shotgun. David is nowhere to be found, but Charlotte seems to be catching on to something as she eavesdrops on Emily’s interaction with her mother. Victoria holds her fire, but makes it clear that has something much worse planned for Emily. Mostly to seduce David until he kills Emily, ideally before either realizes they’re related.

For the first time in Revenge history, Emily has no leverage because she doesn’t have all the information. Up until now, the power struggle between her and V has been pretty even, and if anything, Emily has had the upper hand. But now her dad isn’t dead and everything she knows may as well be snorted up Charlotte’s nose.

Victoria might not have money, but unless David Clarke is the master manipulator and not just some traumatized weirdo, she has all the chips. When David left Charlotte against V’s wishes, it seemed possible that he was playing her – until he almost stabbed his Emily. Or did he? He had a knife, but what really happened?

It is possible they only wanted it to appear that way, and David was really just going to watch his other daughter sleep with a knife just incase (remember, he’s super creepy now). And while he lives in a different house and dresses significantly fiercer, Nolan is still recognizable after all these years and they go way back.

Nolan was originally David’s protégé. He made Nolan’s business a success trusted him to relay crucial information to his daughter Amanda/Emily. These were the very same resources that exonerated David (despite Vicky’s claims) and turned his baby girl into a revenge monster.  Having such a rich history together, how is it that neither Nolan nor David sensed that they already knew each other?

There’s hopefully more to David Clarke than what we know now. Lucky for Em, Nolan is just that used to people trying to kill his gal pal. 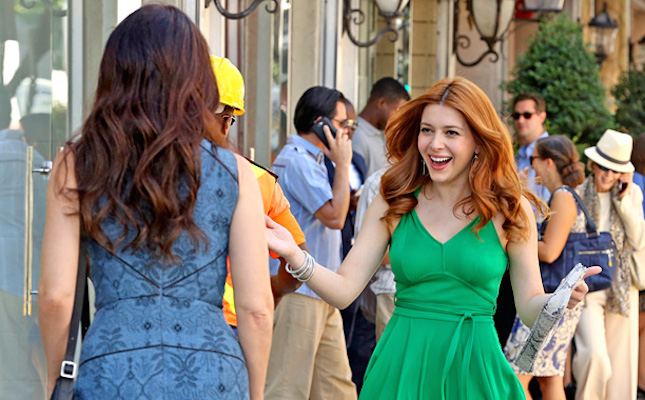