If you feel left out of the whole Twin Peaks phenomenon, we’re here to help! Every week, associate tvDownload editor Vinnie Mancuso attempts to figure out what the hell is going on in this town, while senior editor/Twin Peaks expert Drew Grant answers his questions. This week: ‘Traces to Nowhere.’ My log will have something to say about this.

I’m not kidding when I say I’m going into Twin Peaks completely blind. The show premiered a year before I was born (I know), and over the years it’s managed to stay completely off my radar. I learned nothing about the plot points, characters, references at all, not even through general social osmosis. Except for, like, that dancing dwarf, which didn’t exactly help things.

So needless to say the Twin Peaks pilot was as confusing as Mike Nelson’s hair decisions, what with the murder and the endless relationships and the 1990s and the dancing Twin Peaks High School Student. After getting through the second episode, “Traces to Nowhere,” I think I have a general handle on what the deal is and who everyone is. Good news. Bad news, this episode is also apparently the point where things take a sharp left turn to batshit bananas-ville. Here’s the stuff I can definitely wrap my head around:

James has THE most awful alibi for the night Laura Palmer was murdered. “Um, the last time I saw her was on the exact night she was killed. She ran off into the night, though. I spent the next couple of hours riding aimlessly around on my motorcycle and brooding.” The thing is, James has the perfect amount of Taylor Lautner sad-intense face that I totally believe he didn’t do it.

Laura Palmer: “Do you know why I’m so happy today?”

James: “Because your skin’s so soft and you smell so good?”

Okay nevermind, that is some serial killer shit to say.

Leo Johnson is a disgusting human being, and I’m not just talking about his pony tail. I’m strictly talking 90% about his pony tail. His abusive treatment of poor Shelly up to and including that incredibly disturbing soap-and-sock weapon he unleashed on her was pretty horrible, too. As for the whole bloody shirt thing? I don’t think Leo had anything to do with Laura Palmer’s murder, I just think he had something to do with a bunch of other horrible stuff. I’d even say it might not be blood, but just some of that cherry pie everyone raves about, if I didn’t firmly believe Agent Dale Cooper has eaten every slice Twin Peaks has to offer.

Speaking of Dale Cooper, he’s the best. He talks exactly like those people you meet at like charity events where you can’t tell if they’re genuinely the most social, polite people on the face of the earth or they’re secretly insane and sizing you up to lock you in their basement. That might only make sense to me. But I relate to Dale Cooper because I too am a stranger in Twin Peaks, and I too like my eggs over hard, I don’t give a damn that it’s rough on the arteries.

Moving on. Sheriff Harry S. Truman can eat a donut like he gets paid to do it. 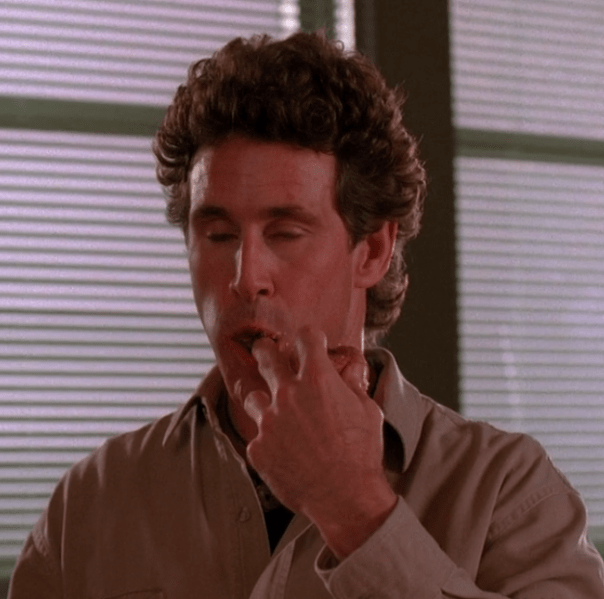 Also, also, now that I understand the pure genius of a silent drape runner and the intricacies of cotton balls, I take back everything mean I said about Nadine and recognize that she, not Dale Cooper, is the best. (Tied with Log Lady. I really like the weird fucking people in this town.)

Hey, want to see something I can’t wrap my head around? 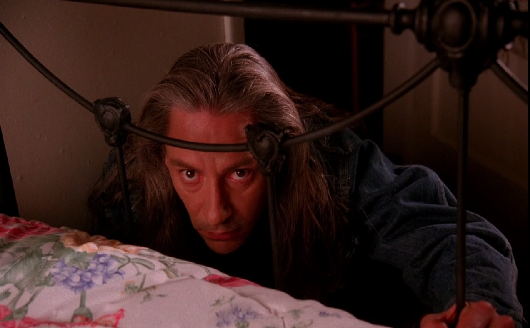 No, NO, do not want, do not want. I undertook this whole Twin Peaks endeavor knowing the show gets pretty out there, not knowing that it would instill forever-nightmares of unexplained men with silver hair creeping at the end of my bed. Mrs. Palmer’s shrieking reaction was literally my reaction.

As for everything else, I gots questions, which is where Drew comes in.

Vinnie: So I guess I should just come out and ask about that guy with the silver hair? I don’t want spoilers I just want reassurance.

Drew: Oh, that’s BOB. Fun fact about BOB (with no spoilers): he was a last-minute addition to the cast by David Lynch, who literally took the creepiest looking set dresser on the show, Frank Silva, and wrote an entire plot for him that involved, you know, hiding out in weird places. He unfortunately passed away, so he won’t be coming back for the new show.

Vinnie: Given that a one-armed man walking around a hospital isn’t that weird, why does it feel so weird?

Drew: Whoa, GOOD QUESTION! Especially since they have that lumber mill…I’m sure there are thresher accidents all the time. Mainly he’s suspicious because he just wanders in and out of the morgue with an unflappable chillness. Like, “No big deal, just here to sing songs  and cheer up the kids in the chemo ward and also to visit the dead.”

Vinnie: Is two days after Laura Palmer was murdered really the best time for James to meet Donna’s parents? I don’t care how adorbs his sweater is.

Drew: As you’ve noted, James and Donna are the worst. They are sad for approximately three seconds about their best friend’s murder before HORMONES happen and they are the most in love, ever. Guys…chill out. I was always surprised Donna wasn’t more of a suspect, because her moony eyes over James makes her a prime candidate for a Single White Female-ing of her BFF.

Vinnie: Will the percolator mystery ever be solved?? (But seriously did I miss something?) 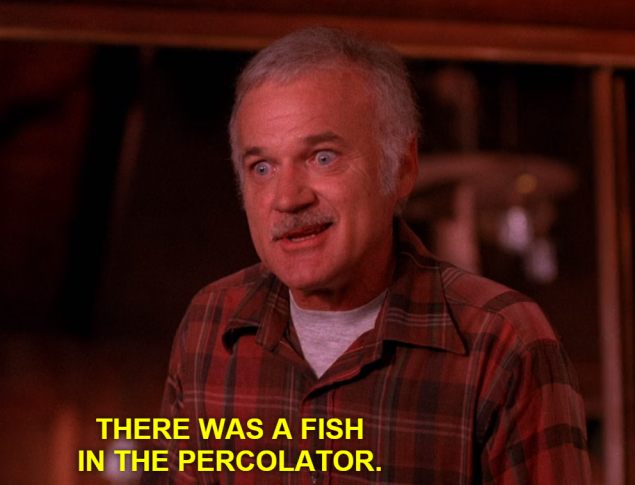 Drew: Unfortunately, Jack Nance, one of Lynch’s regulars (he’s Eraserhead!), died in this totally bizarre and tragic event in 1996, so he won’t be back to explain this, either. Also, no…the fish was in the percolator because it’s the Pacific Northwest, obviously. Fish are in everything.

Vinnie: All jokes aside, I seriously have no idea what’s going on with the end of this episode with Dr. Lawrence Jacoby crying while listening to a tape Laura made for him? And he’s got half her locket? Help me, Drew!


Drew: So Jacoby was in love with Laura, as was everyone else in the town. He has one half of her locket because I don’t remember why, exactly, but the locket stuff is definitely important so pay attention! Also: keep track of Laura’s diaries, because they move around a lot, too.

BTW: if you want to buy an official Laura Palmer necklace, you can on the Twin Peaks site. Their description is hilarious:

Do you have a “lover” you want to share your heart with? Feel like leading an entire town on a goose chase with a simple piece of jewelry? Or perhaps you just like to collect. Well this is the item for you! This is a prop replica of the half heart necklaces Laura and James sport in the series. Don’t be fooled into paying more elsewhere…they’re all the same necklaces! Each set of two comes with both a “Best” and “Friends” necklace.

AH! WHY IS “LOVER” in quotes??? And the line about not paying more elsewhere…they’re all the same necklace? Is that like…a clue?? 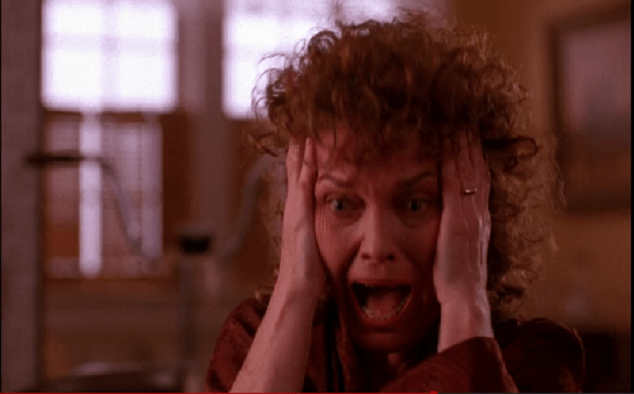