More than a year after it became a focal point in the 2013 mayoral race, GOP gubernatorial candidate Rob Astorino announced his opposition to a planned solid waste transfer station on the Upper East Side and called on the state not to renew a permit for the site.

“This itself is five times more expensive than the current solution of trucking the garbage from here in Manhattan into New Jersey, which is used, by the way, without any complaints, in New Jersey is used for garbage into energy,” Mr. Astorino said of the planned station.

The East 91st Street Marine Transfer Station — which would accept and package the borough’s residential garbage and then ship it out by barge — was first proposed in the city’s 2006 Solid Waste Management Plan, approved by the City Council to deal with New York’s trash after the closure of Fresh Kills Landfill on Staten Island.  The plan was developed with an eye to requiring each borough to take care of its own garbage after decades of all of it being shipped to Staten Island — a borough home to many Republican voters who might be considering Mr. Astorino.

But the Westchester County executive wasn’t worried about alienating those in other boroughs by joining the opposition to what critics have taken to calling the “Yorkville Dump.”

“I think it’s an argument that doesn’t have merit. Because of fair share, Manhattan garbage is not gonna go to Brooklyn or other boroughs. Manhattan’s garbage will continue to go, as it is now, far less costly than this proposal, will continue to go to New Jersey, as it should,” Mr. Astorino told the Observer.

While it became a flashpoint in the Democratic mayoral primary — and again in the general election — the transfer station is long-planned and unlikely to be stopped. But Mr. Astorino was undeterred by the odds against those who want to stop the transfer station.

“I think that’s exactly what’s wrong with government — a plan that’s bad to begin with moves forward at five times the cost, so let’s just continue, even though we know it’s the wrong thing to do?” Mr. Astorino asked. “The right thing to do is revisit it now.”

But while it may seem like a done deal — and one more relevant for city pols — Mr. Astorino pointed to a state Department of Environmental Conservation permit for the site that expires today. He said Gov. Andrew Cuomo could direct the agency to decline to issue a new permit for the station and review new issues brought forth by the flooding during superstorm Sandy.

“I think it’s an opportunity to put a pause on this and let the DEC do its job to review the circumstances that have changed since 2009,” Mr. Astorino said.

The city has three pending permit renewals before the DEC, according to the agency.

“This project was put forth by the City of New York and has three pending permit renewals before the DEC. After DEC completes its initial review, the public will have an opportunity to comment on the air permit for the project,” DEC spokesman Tom Mailey said.

While previous permits have expired, no new permits are being issued immediately — though the prior permits remain in effect pending a determination on whether to renew them.

While the transfer station has continued to spur visible protests, Mr. Astorino was not joined by any neighborhood activists during his press conference.

Opposition to the station is a popular stance in the neighborhood, where Mr. Astorino might be hoping to snag some votes — the Upper East Side is one of the few Manhattan locales that voted for Joe Lhota in the mayoral race.

“Then I finally agree with a Cuomo,” Mr. Astorino quipped.

This story has been updated with comment from the state DEC. 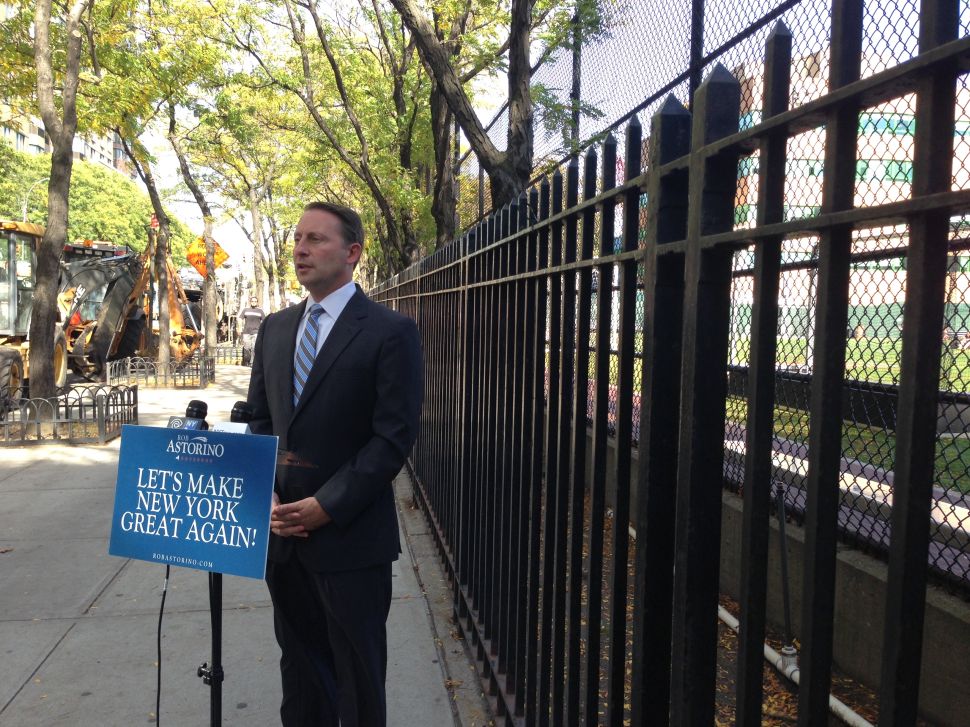