I went to many social functions at The New School over the two years I was in grad school there, and I was particularly excited about this one. As a 50-year-old, former stay-at-home mom, I was proud to be almost finished with my M.F.A. and honored to meet the writers, editors and agents attending a party celebrating new books published in the last year by alumni and faculty.

There were several bartenders who worked these events, but one in particular always spoke to me. He looked to be in his late 30s, maybe Mediterranean, with olive skin and dark hair. The first time, he said, “I remember you.” Another time he saw me and said, simply, “She’s back.” It was only a few words but he gave me a creepy vibe so I ignored him. I never looked him in the eye, never chatted back. I’d take my drink and go on my way.

He was one of two bartenders serving drinks that night, and he was the one to pour my third glass of wine. I’d already had two small glasses, and the third must have tasted like the others because i don’t remember anything amiss. I went on to chat with a first-year student I’d just met, who reminded me of Cleopatra with her porcelain skin, black hair and vibrant red lipstick. I asked her how she liked the program, but then it was like a switch flipped and my world went black. The rest of the party was lost to me. Apparently, I was swaying and couldn’t stand still, and I kept going over to the table where books were being sold and leaning on it to hold myself up, at the same time getting in the way of people who were trying to buy books.

I wasn’t sure how long I remained at the party, but I later found out that my friend, Heeyen, with the help of a school administrator, managed to hail a cab to get me home to Queens. I vaguely recall the kind cab driver talking to me on the way home. When I got near my address, I asked him to drop me off a few blocks away—I was so disoriented I convinced myself that I needed to walk and get some fresh air. He kept saying, “Miss, I want to take you to your home.”

I persuaded him to let me out two blocks from my house. But as soon as I stood up, my legs crumbled beneath me. I knew I fell down. I told myself, “Linda, you’re on the ground—get up,” but I couldn’t make my body move. When I opened my eyes, I was in a brightly lit ambulance with two paramedics talking to me. I told them to take me to New York Hospital in Queens.

Sitting on a gurney in the emergency room, I was dazed. My head was pounding. I was not sure how much time had gone by, but when I realized I had my cell phone, I called my husband and told him, “I’m in the hospital. I fell. I broke my face.”

He arrived and looked at me with sad eyes.

“I’m sorry, I’m not going to be pretty anymore,” I told him.

He hugged me and said, “You’ll heal.”

I grew up in the drug-infested streets of New York the 1970s. I knew what it was like to be high or drunk. What I experienced that night was like nothing I’d ever felt before.

“I think someone drugged me,” I said out loud.

I told the doctor to test me. I was given a cup to pee in and went to the bathroom. It was there that I caught a glimpse of my face in the mirror and was devastated. My eyes were swollen and puffy and blood oozed down my face. I felt mutilated. I’d recently had extensive dental work to repair my teeth from lifelong discolorations and distortions. I’d finally felt confident about my looks. But now I was a mess.

After I took the urine test, the doctor said if it was a date-rape drug, such as Rohypnol, GHB or Ketamine, it might not show up, which is why people choose those substances in the first place.

After what seemed like an hour, I began to get restless. I had to wait to get an MRI to rule out a concussion. Even though my head was pounding, I was completely alert and could see other people in the room nodding sympathetically at me.

“Let’s get out of here. I want to go home. I can sign myself out,” I told my husband. He assured me that we needed to make sure I didn’t have a head injury. A stitch was sewn into my upper right cheek to close the one-and-one-half-inch laceration that ran from under my eye to the top of my cheek. Three hours later I was sent home and told to take a shower and wash my face.

Exhausted, I went to bed. The next morning, in the mirror, I saw a bruise the size of a fist under my chin and a cut through my eyebrow. Both eyes were purple and swollen. I felt broken, disheartened and sad. The night before I’d been proud about finishing my degree, and the possibilities that graduation would bring. This morning I awoke to a surreal nightmare.

When I tried to eat a piece of toast with cream cheese for breakfast, I felt a sharp pain that shot through my head every time I tried to chew. My chin must have hit the concrete when I fell. It would take two months for my teeth to feel normal again.

That whole week I stayed home, feeling too disfigured to go out in public. I missed an “invitation-only” event for graduating students, a musical poetry performance, and my turn to have my thesis critiqued. I made up lame excuses for my absences. In my isolation, I wondered, who would want to drug a 50-year-old mother of two? Was that drink really meant for me? Was I the only one targeted?

At first, I hadn’t planned to tell anyone. I was embarrassed that a street-smart New York woman could get duped. At home, I spoke with my two grown sons. Kevin, who’s 26, said, “Show me your hands.”

I lifted my unharmed hands. He said, “You didn’t try to break your fall. If you knew you were falling you would have tried to stop your fall.”

My 25-year-old son, Nick, was adamant that I tell someone. “You have to,” he insisted. “My friend Lauren got roofied and it affected her so badly she threw up blood.”

On my first Monday back to class, 11 days after the incident, I met with the administrator who coordinated events. “Can I close the door to talk to you?” I asked her, nervously. I told her about my experience, not realizing she had helped Heeyen get me into the taxi. She listened to me and appeared shocked, asking if I knew which bartender gave me my last drink.

Eight days later, I received an email from an administrator who asked to me to meet with him. I was depressed and shattered and had to complete my thesis. It had been hard enough for me to meet with the first administrator, someone I knew; I wasn’t ready to talk about the incident with a stranger. I was not looking for revenge, I figured the school had enough information to act on. I waited five days and responded to the email, saying I didn’t want to meet. I was trying to move forward and not dwell on what had happened.

After that, I made plans to meet Heeyen for dinner so I could piece together the evening’s events. “You were so out of it. I had to watch you,” she said. She described trying to give me , but I couldn’t hold the cup. “You were staggering around—you wouldn’t stay still.” In my M.F.A. program, there were nights after class when students convened at the local bar. The other students had seen me have a couple of drinks before and agreed that my behavior that night was unlike anything they’d seen, which was similar to the people teetering back and forth in the “roofie videos” I’d Googled.

I have no proof, except my own knowledge of how I normally act after a couple of small glasses of wine—especially after a hearty dinner. What’s more, I fell hard and fast but was lucid in the hospital, which is consistent with the arc of some date-rape drugs. GHB (gamma-hydroxybutate), which I believe I was given, can take effect between five and 20 minutes and last three to four hours. A week before graduation, a classmate named Simone told me the bartender had been looking for me later that night. “Where’s your tall, blonde friend?” he asked her.

When I shared my story, I was amazed how many people admitted to me, that they or someone they knew had been drugged, including my 29-year-old niece and one of my classmates. When I asked them if any of them reported their experience, most admitted they did not.

Some sources estimate that a million people a year are victims of date-rape drugs. There have been many cases of people overdosing on them. A doctor I spoke with told me that while druggings are very common on college campuses, often they remain unreported, unsolved and unproven.

Amid the roofie threat, some people are starting to take preventive measures. This past August, four male students from North Carolina State University created a nail polish that changes color when dipped in a beverage containing a date-rape drug. Drink Smart sells coasters and test strips that can detect the presence of drugs. DrinkSavvy is in production to create cups and straws that will change color if a drug is present. It’s sad that these products need to exist at all.

I was hesitant to attend the last event at school, which was the Thesis Readings. When I told my thesis advisor, Elaine Equi, that I was thinking about not attending, she said I’d worked so hard the past two years, and I should be proud of my work, and that I might regret not going. I thought about not drinking that night, but public speaking makes me nervous and a drink would help calm my nerves. I decided to go, and purchased a single serving wine bottle to bring with me.

In my cap and gown at graduation, I walked down the aisle with a scar on my upper lip, cheek and eyebrow. Going back to graduate school had been life-changing, but being drugged could have been life-ending. I was lucky. What happened to me can happen to anyone.

In response to this incident, a New School spokesman sent this statement: “The New School is committed to ensuring the safety of our community, and we take seriously and respond to all reported safety incidents.” 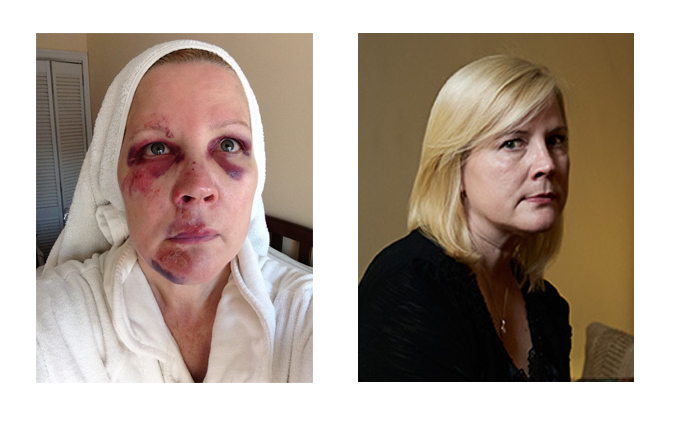