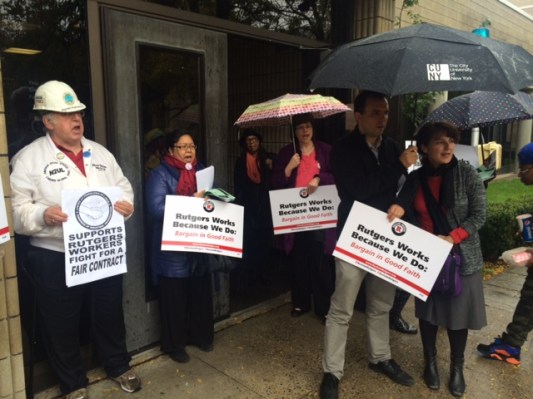 NEWARK – A labor rally on the Rutgers-Newark campus on Thursday called for Rutgers University leadership to quickly settle its contract with over 20,000 university workers, as well as keep the university’s focus on academics rather than athletics.

“It’s not fair that [Rutgers’] money is being spent on sports and being taken out of academics,” said Edwin Rodriguez, 22, a senior from Lawrence Township, in front of an approximately 60-person crowd comprised of students, teachers and physical plant workers at a rally that was imitated at all Rutgers campuses statewide. “I’m here to get an education. If [the money] is going into sports, I don’t know why I’m here.”

Union representatives claim that university leadership is engaging in “stalling tactics, such as canceling bargaining sessions,” rather than expeditiously coming to a contract agreement with Rutgers faculty and staff, according to a written statement from Reclaim Rutgers, a coalition of faculty and staff unions.

“We’re advocating for more resources for faculty and staff. It is totally out of line to have millions of dollars being poured into athletics,” said Richard Gomes, 44, of Newark, an ESL instructor at Rutgers-Newark. “We give [athletes] a good quality G.P.A. so they can be on the teams, but when it’s time to disperse dollars, they don’t give the faculty and staff anything.”

“We want to reclaim Rutgers from the forces who want to corporatize this institution, ” said Joe Richard, staff organizer for the American Association University Professors – American Federation of Teachers (AAUP-AFT). “They are cutting back funding for the core academic mission, and are making work here more contingent, less stable and less well-paid. I’m a big sports fan, but I don’t want that to come at the expense of the core mission of the university.”

“Rutgers cares deeply about its employees and we are hard at work negotiating fair and reasonable contracts with many of the unions representing Rutgers employees,” responded Rutgers University spokesman E. J. Miranda in a written statement.

“Rutgers strives to compensate its employees fairly; we have always placed a high value on faculty and staff excellence and we have provided our employees with salary and benefit packages that are among the most competitive in the nation for public research universities.

“We are being entirely respectful of the collective bargaining process and the negotiations at the bargaining table. We expect the employee unions and the administration’s negotiating team to continue to work in the best interests of the university, its students and the communities we serve.

“Any assertion that Rutgers makes athletics a priority to the exclusion of our core mission of teaching, research and public service is factually incorrect. The instructional budget this year totals nearly $795 million – not including libraries and other services that support our academic mission – while the budget for Intercollegiate Athletics is less than $70 million.” 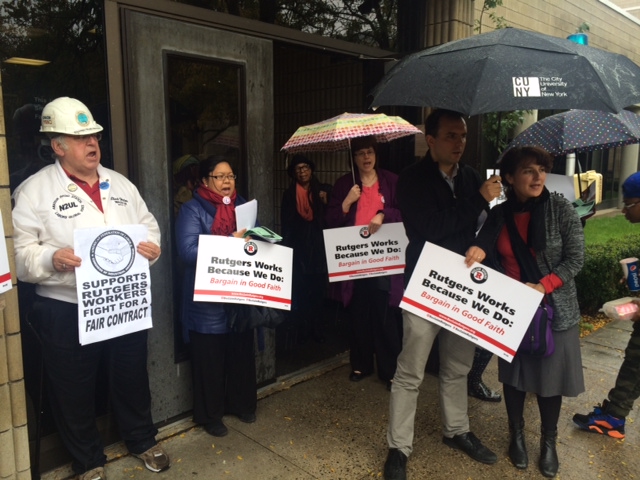