Attorney General Eric Schneiderman and his Republican challenger John Cahill squared off in an acrimonious debate tonight, charging each other with being out of touch, too political, not transparent enough, and generally unfit for the job of the state’s top law enforcement officer.

During an hour full of interruptions and cross-talk, Mr. Cahill sought to paint his opponent as politicized and corrupt, while Mr. Schneiderman tried to paint Mr. Cahill, a former top aide to Gov. George Pataki, as too conservative to protect rights to abortions or same-sex marriages and as a tool of the energy industry.

“When you see the money flowing in from special interests to attorneys general, as my opponent — as he has raised money from people he is doing business with, shaking down people that he has enforcement action against — it raises questions again about the politicization of the office of attorney general,” Mr. Cahill charged.

Mr. Schneiderman later responded sarcastically:  “I appreciate your aggressiveness, John. I know it’s a hard campaign,” he said, as Mr. Cahill insisted it was passion, not aggression. “If you would talk about a specific plan for the job, that would be refreshing.”

“The allegation of shaking down people I have business with is completely false,” Mr. Schneiderman said. “The suggestions that are made here — Mr. Cahill has raised money from the Koch brothers, from the biggest oil, coal and gas companies in the country. We also know in his private practice … he’s made millions of dollars from these companies.”

Mr. Schneiderman called on Mr. Cahill to disclose a list of his clients at his energy consulting firm.

“You’re going into the attorney general’s office, if you’re elected, with the greatest debt to polluters of any attorney general who has ever existed — so if you’re talking about who you’re taking money from, please disclose your clients,” he said.

That heated back and forth was typical of the hourlong debate, which saw the opponents sparring over gun control, the Moreland Commission, Ebola, the sharing economy, and whether Mr. Cahill would defend New York’s laws allowing for abortion and same-sex marriage (he said he would).

Mr. Schneiderman was asked about his role in the Moreland Commission — he deputized the members of Gov. Andrew Cuomo’s corruption-busting panel — and its sudden end, and said he would not “jeopardize the investigation now underway in order to respond to cheap political points.”

But echoing a line of defense used by Mr. Cuomo — whose cold relationship with Mr. Schneiderman was also a debate topic of discussion — Mr. Schneiderman said the purpose of the committee was to “look for weaknesses in an existing law and make recommendations for changes.”

“What happened after that, I can’t talk about,” Mr. Schneiderman said.

“It’s not independent from the attorney general. That was the whole crux of the Moreland Commission: it was the Schneiderman Commission,” he said.

Mr. Cahill wound up on the defensive when asked about reports alleging he had set up meetings between elected officials and his clients without registering as a lobbyist.

“If I sit down with one of my colleagues from DEC to say, ‘how’s your wife and kids,’ that’s not lobbying,” he said.

The two did manage to get through a “lightning round” mostly without arguing. Both thought U.S. Attorney Preet Bharara would make a good U.S. Attorney General; both passed the bar exam on their first try; both had been to a Buffalo Bills game; neither had gotten a flu shot.

Do they plan to read Zephyr Teachout’s book, Corruption in America?

“I don’t have plans — there’s a lot of books on my list before that one,” Mr. Cahill said.

From Mr. Schneiderman, with a smile: “Right after I read the governor’s book, yes.” 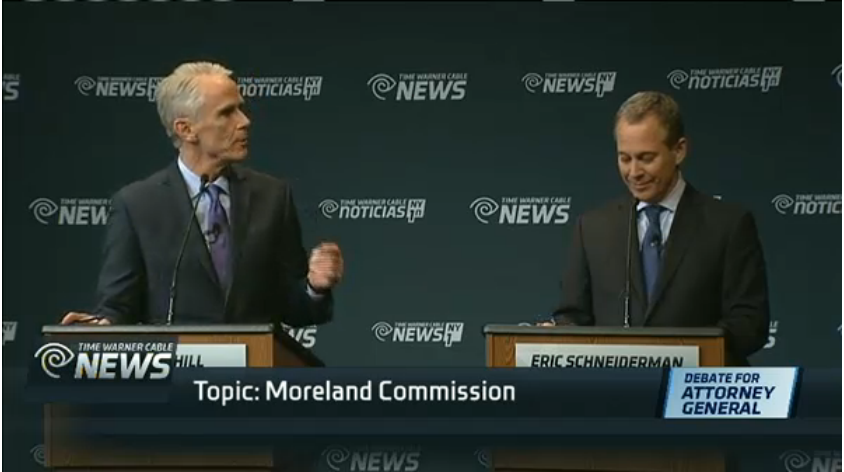