About midway through our interview, tucked away in a small coffee shop off Atlantic Avenue, Sean Pertwee whipped out his cell phone. He wasn’t being rude, he simply needed to make absolutely sure he was remembering a fact correctly. He tried ringing his wife, Jacqui, to double check that a certain fragrance retailer on Jermyn Street, London was named Floris.

It did not seem to matter much that his wife, too, was in London, five hours ahead of us. “No, no, this is important,” he assured me.

That is simply how Mr. Pertwee is. When the 50 year-old-actor described an experience to me, he spoke in subtleties. He recalls events not just by their sights but by their touch, taste and smell.

“All actors have different approaches and mine is about the detail.” he said early on in our conversation. “It’s about the little things and the atmosphere you’re trying to create.”

This attention to detail has led Mr. Pertwee to a remarkably prolific acting career that spans more than 100 roles in television, film, stage and even video games. He cut his teeth performing at the Royal Shakespeare Company. He has appeared in so many sci-fi and horror titles, and has met a gruesome end in such a large percentage of them, there is a “Sean Pertwee Must Live” campaign with traction on the internet. In 1991’s Clarissa, he even got to kill Sean Bean. Then again, who hasn’t killed Sean Bean?

Most recently, however, he’s been transplanted from his native London to Brooklyn, New York to portray the iconic Alfred Pennyworth, butler to the Batman, on Fox’s Gotham. Brooklyn Heights is a suitable stopping off point for Mr Pertwee, whose UK residence is the North London celebrity enclave once home to the infamous ‘Primrose Hill Set’ that included Jude Law and Sadie Frost, Kate Moss, various members of rockband Oasis and their spouses.  Mr Pertwee and his wife, make-up artist Jacqui Hamilton-Smith existed safely beyond the peripheries of the most debauched shenanigans and emerged unscathed from the ensuing tabloid scandals and media drama. Fellow Brits describe Mr Pertwee though, as a guy who is frequently to be found close to the epicenter of whatever the current zeitgeist happens to be. To meet him, I walked into this interview, as the Observer’s resident comic book fan, confident that I was adequately up to snuff on my Batman and Gotham research.

I had no idea what I was in for.

“We found out that [Alfred’s] middle name is Thaddeus Crane, in fact that was his name originally, and Alfred Pennyworth is a pseudonym,” Mr. Pertwee described breathlessly, without pause. “He worked in the special services during the second World War. In fact, did you know the name Pennyworth derived from the fact that he considered his life worth a penny, because he used to keep a cyanide tablet concealed in a penny?”

I conceded to Mr. Pertwee that no, I had not known that.

I did notice that throughout our conversation, Mr. Pertwee referred to Alfred Pennyworth simply as “he,” as if the character was alive, a person that Mr. Pertwee worked with on set. To him, Alfred is real, a person born out of exhaustive research and attention to specifics. From his very first meeting with Gotham creator Bruno Heller, he understood the enormity of taking on a role that is real not only to him, but to legions of loyal –some would say rabid – fans.

And even if the immensity of the character had not dawned on Mr.Pertwee immediately, the audition process would have cemented it. He recalled having every electronic device taken off his person, and then being brought into a secluded room, all before he even knew what he was auditioning for. “It was total lockdown,” he said.

It was only after this isolation that he was allowed to read the script for what would later become the pilot of Gotham.

“[Executive producer] Danny [Cannon] said to me ‘why are you so nervous?’” Mr. Pertwee remembered. “And I said ‘well why do you think?’ I had read the script by then and I really wanted the job. I knew it was Alfred. And I thought it was extraordinarily brave, because it is a very different take on the character.”

Funnily enough, most of the rare times Mr. Pertwee referred to the character as “I” instead of “he” came when he described the bond developing between David Mazouz – who plays a young Bruce Wayne – and himself. On the show, Mssrs. Mazouz and Pertwee portray a sort of inverted father and son dynamic, built on firm discipline and fierce protectiveness. The relationship has grown off camera, too.

“We’re shooting chronologically, so we are becoming more accustomed to each other in real time,” Mr. Pertwee said. “[David] has this flame in his eyes, this darkness, that he can just turn on, which I find terrifying but brilliant.”

But off-screen, Mr. Mazouz is still a 13-year-old boy, an age where finding common ground with your 50-year-old colleague can be a rough process. Luckily, common ground came in the form of Mr. Pertwee’s son named, what else, Alfred. Mr. Pertwee’s family live full time in England while he shoots Gotham, but frequently visit.

It wasn’t until he saw Mr. Mazouz playing with his son that he realized the full extent of the ties between them.

“I was reminded that Bruce is still a young boy in the series,” he said. “And it’s all very well to show Alfred giving him the stiff upper lip, but he – Bruce — also needs to laugh.”

It was interesting to hear Mr. Pertwee describe the hills and valleys of fatherhood, because his own father just so happened to travel through time and save the galaxy on a weekly basis. Jon Pertwee portrayed the third incarnation of the eponymous Doctor of Doctor Who from 1970 to 1974.

And Mr. Pertwee – Sean, that is – certainly lived a life suitable to the son of a Time Lord. Mr. Pertwee recalled long stretches spent on Euro-billionaires and party-animals playground Ibiza, a “mad island…this weird eclectic bunch of people that ran away and lived in this sort of hedonistic paradise.” Many people know the name Elmyr de Hory as the master art forger of the 1960’s, and subject of the Orson Welles film F for Fake — Mr. Pertwee called him godfather. He experienced a youth surrounded by, in his words, “draft dodgers, murderers…actors.”

Most importantly, though, he was surrounded by artists.

And it was art, maybe even more so than acting, that stuck with Mr. Pertwee long after he graduated from his flamboyant youth into an accomplished actor. In 2011, at the height of the recession, Mr. Pertwee — along with his partners Simon Anderson and James Golding — opened Pertwee, Anderson & Gold on Bateman Street in London.

“We said, why don’t we own a gallery? Well I knew why not, because it’s fucking expensive. But we created a brand,” He recalled. “We wanted it to sound like a Jewish accounting firm. There are so many galleries who call themselves names like ‘Square’ or ‘Cube’ or ‘Cloud’ like, oh, shut up!”

This art space enabled the actor to manifest his interest in creating moods and atmosphere. He recreated an old-fashioned, gentleman’s parlor room aesthetic for the gallery. Their design team imported specialized lighting from Brazil and, because for Mr. Pertwee things need to be perfect on even an unconscious level, he designed and manufactured his own scent to hang in his gallery.

And where does one go to manufacture their very own, unique scent? Well, you see, that was the problem. Mr. Pertwee could recall that particular fragrance retailer was indeed located on Jermyn Street, and he could quite clearly remember the experience, but he was not certain that the venue was without a doubt named Floris. For someone like Mr. Pertwee — an actor that memorizes a character down to the sigil on his ring, an artist that creates his own aroma to invoke the feeling that he wants and a man that uproots himself from London to Brooklyn just to live a dream over a lifelong career of working in New York City — this is simply unacceptable.

Luckily, after some problems and many attempts to connect with his wife on another continent, he finally managed a brief conversation with Jaqui. “Brilliant, it is Floris,” he informed me, turning back from his phone smiling.

The relief in his voice, at having nailed down yet another detail, was palpable. 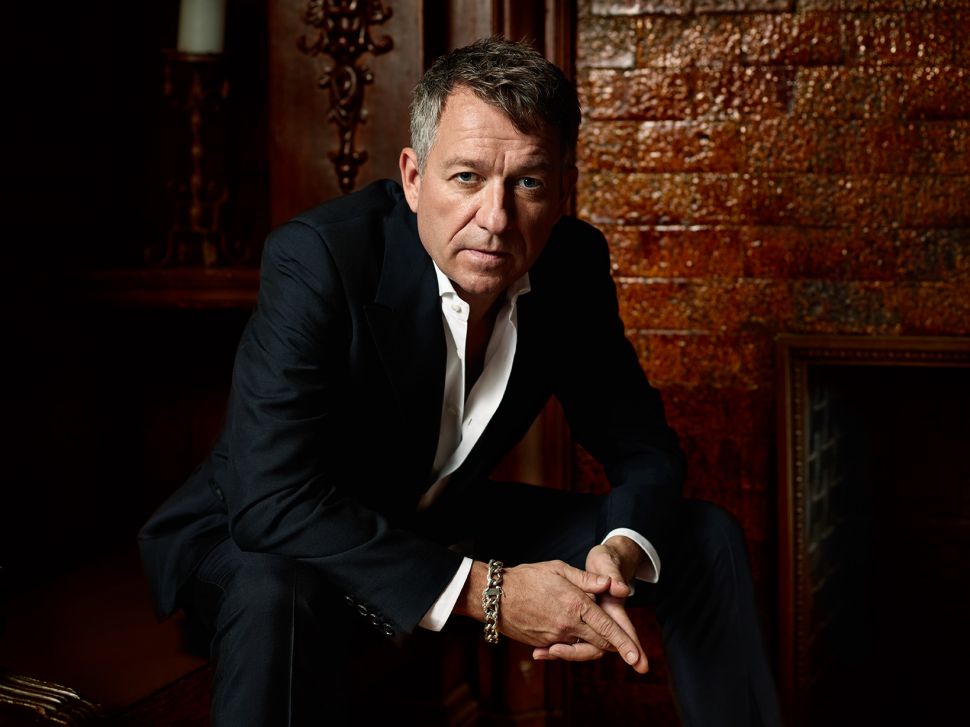