It’s considered one of the toughest jobs in the entertainment industry; the actual duties of which are a mystery to many. Yet, in recent years, because of the rise of social media, it’s become one of the most visible roles within the television world.

A showrunner has the responsibility of overseeing everything that goes into making each episode of a television series, from the creative aspects to the financial and logistical elements. It’s quite a juggling act and one that not many people fully understand.

“The audience is 90% people who don’t know how the soap is made,” says Hart Hanson, who was the showrunner of Bones, The Finder and currently Backstrom.

So, what exactly does a showrunner do?

Irish born filmmaker Des Doyle, a passionate television fan, decided to delve into the world of those who toil to bring popular comedies and dramas to the masses.

The film boasts an impressive cast with over 20 showrunners sharing their personal stories about their unique role in the overall landscape of television.

“I wanted to make this film because I’m absolutely fascinated by the whole process of how television is made,” reveals Doyle. “So I looked for a documentary about what the showrunner job is really like, what it entails, and I just couldn’t find much, so I decided to make one.”

Working in Doyle’s favor was the fact that the role of the showrunner has been evolving and moving more to the forefront in recent years. “I saw that the show ‘Lost’ was a really big game changer in terms of how showrunners are perceived,” he explains. “[The Executive Producers]Damon Lindelof and Carlton Cuse were giving lots of interviews on very high profile talk shows and they were doing podcasts and other things like that too. They became big stars in their own right on that show. It just goes to show that with social media the level of access people have to the Showrunners has increased so much.”

There may be an amplified level of access via social media for fans, but for Doyle to get his sought after targets to commit to appear in his film was a different story.

“When I came to the states over four years ago, no one knew who I was so it was difficult to get anyone to talk to me and get this off the ground,” admits Doyle. “Maybe it was sheer determination or bloody minded Irish-ness or something like that, but I just felt that if I could get to people and talk to them and show them what I wanted to do and how genuinely interested I was in them and their process, that they might agree to do it.”

The first person to come onboard was Jane Espenson (Once Upon a Time), followed by Mike Royce (Enlisted) and Whedon. “Getting Joss really changed everything because getting someone of his stature in the industry meant that people were starting to take what we were doing more seriously,” explains Doyle.

Exactly how the filmmakers got Whedon to agree to be in the film is one of those great tales that highlights how the intersection of fortitude and luck can change the entire course of a project.

“We spent a year trying to get to Joss through an agent and we ended up running into him in a [parking garage], and we made this crazy 30 second pitch, throwing in every name that we had onboard and at the end he said, ‘Have my assistant set it up I have some things to say.’ It was just one of those karmic moments when you just start to believe that this is mean to happen,” said Doyle.

The actual Whedon interview wasn’t without its challenges, however. ”We only had an hour to do the interview and wouldn’t you know it they started cutting down this tree right in front of his house and it caused this traffic jam and everyone was honking,” laments Doyle. ”Oh it was so tough because Joss was talking and I was looking at my sound guy and he was shaking his head, telling me that this wasn’t working at it. It was killing me inside. I was stressing out wondering if we were going to be able to use any of it at the end of the day. Thankfully, the post guys did a fantastic job cleaning it up and we got to use it in the film.”

There were several less stressful moments during the process as well, says Doyle “When we sat down with Matt Carnahan, the pilot for House of Lies had just been greenlit. It was an amazing time to be able to talk to him about the process of getting the show on the air and up and running. And, when we interviewed Robert and Michelle King we were told that we had maybe 30 minutes because someone from The Hollywood Reporter was coming in after us, but the Kings enjoyed talking to us so much they made the person from The Hollywood Reporter wait, which was kind of cool. Even when one of their cast members called in they put them off, saying, ‘Oh we’ll call back.’

Co-Producer of Showrunners, Ryan Patrick McGuffey, explains that one of the keys to the filmmaker’s success was their unique approach to discussing the work with the each interviewee. “We did a lot of very detailed research on everybody and really looked for ways to show them that we weren’t going to ask them the same questions that they’re constantly asked over and over again. I think there were one or two occasions were people were taken aback by the questions we asked because of the level of detail, but all of that background work really paid off in that we could see most of the people we talked with felt relaxed with us and that resulted in these really open conversations, which was our whole goal in all of this.”

Surprisingly, the mysteriousness of the position of showrunner is also, ironically, present for those who actually hold the title, says Doyle.“A number of the Showrunners commented that there are so few of them that do this job and it’s not like they can just go out and sit down at a bar somewhere and find someone there to swap war stories with.” He continues with a slight laugh, adding, “It’s like having sex, everybody does it, but no one really knows exactly how everyone else does it.”

When Doyle and McGuffey sent out the finished film to the participants, the wait for their reaction was a bit unsettling. “If they felt like they’d wasted their time or were unhappy with it for any reason, we would have failed in what we were trying to do and after all of the time we’d put into this it, would have been crushing,” admits Doyle.

Fortunately, that blow never came as the Showrunners involved have all given their Seal of Approval to the project. In fact, many are so behind the venture that as the film has been moving about the country on a screening circuit, several of the showrunners have joined in panel discussions, including Bill Prady and Mike Royce at Comic Con in San Diego and Janet Tamaro (Rizzoli and Isles) at New York’s Comic Con.

Those wishing to use the film as an entre into the television industry will find that, “The methodology that’s documented in the film is going to exist for an indefinite amount of time, especially as these shows get bigger and broader and more cinematic,” explains McGuffey. “We’re taking people into the world that these showrunners inhabit and we’re giving them an inside look at something that is mostly a mystery. It’s a unique opportunity. It’s like an educational reference, but it’s not boring.”

Doyle adds, “We worked hard to balance the film so that if even if you’re not part of the television industry, if you just enjoy watching television, you’ll still find what the showrunners have to say extremely interesting, and insightful.”

The ninety minute film hardly seems enough time to cover the topic thoroughly, leading to question whether there will be another installment of Showrunners. “We shot over 100 hours of footage so we do have quite a bit more material,” confirms Doyle. “If this does well and people come to us and say they want see more, we do have more than enough for another film. And, one thing that’s in our favor if we do decide to do move forward with a sequel is that now we’ve earned the trust of people and networks, we’re in a better position to reach for some things that we weren’t able to do this time around.”

Accompanying this film is a Showrunners companion book, written by Tara Bennett, who has authored or co-authored TV companion books including The Lost Encyclopedia and The 24 Handbook.

“Adding a companion book to go with the film was a brilliant idea brought to us by Tara,” says Doyle. “She saw the trailer for the film, called me and pitched the book and it all worked splendidly. She knew just how to craft this into a publication and so far the book is doing really well in terms of sales.”

After toiling to bring his initial idea of an in-depth look into the mind and work of showrunners to fruition, Doyle simply asks that people consider seeing his work in the theater. “We pushed hard to get this into theaters and watching it with a group is really a big part of the whole experience of it, so I would really love for people to see it in that environment. But, at the end of the day, whatever way people choose to watch it, by downloading it or whatever, that’s great, just watch it. We worked hard to make it the best it can be and now we want to share this with everyone.

McGuffey is quick to add, “We came at this from a perspective of being television fans so we really wanted to create a journey that other fans like us would appreciate. Pure and simple, it’s a love letter to television.”

Showrunners debuts in select theaters Friday, October 31st and will also be available for download from iTunes the same day.

To view the trailer for the film, please visit this site. 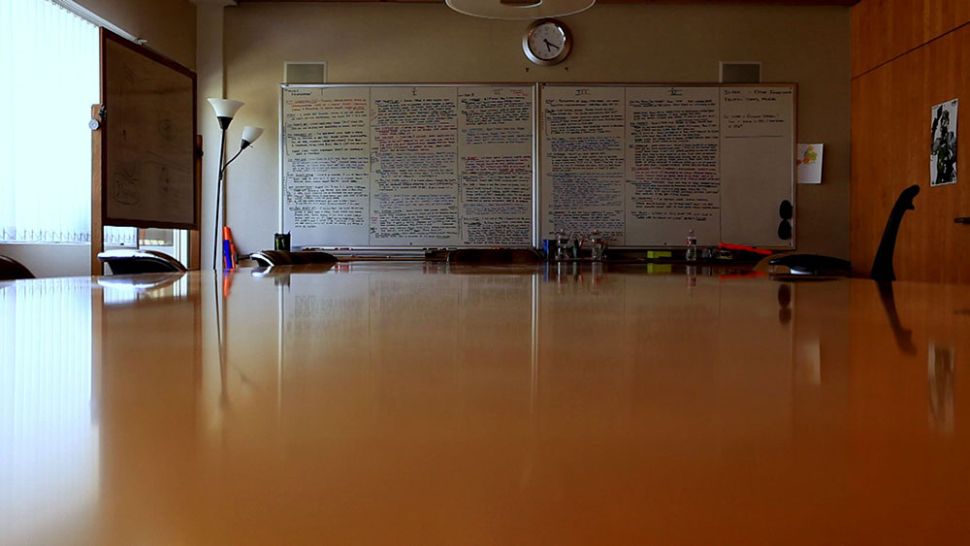