Just in time for Halloween, a blood-curdling horror called Stonehearst Asylum has arrived to boil your nerves and fry your hair. No silly vampires, lovesick werewolves or wet, web-footed creatures from the black lagoon this time. Just real, sadistic psychos like the fiends Karloff and Lugosi used to relish in their sleep. Based on a story by Edgar Allan Poe, directed with style and imagination by Brad Anderson (The Machinist), filmed in the creepy darkness of Bulgaria (you hardly get this kind of movie anymore), and starring an illustrious cast solid and dedicated enough to craft to make you believe they’re in a depraved version of Hamlet staged in Elsinore Castle, this is a movie that is several cuts above your usual straitjacket thriller. Enter at your own risk.

The time and place is the same penny dreadful setting as all of those juicy wet-cobblestone and fog-creeping-in-off-the-Thames epics from the end of the 19th century, including the ones about Jack the Ripper, Jekyll and Hyde, Sweeney Todd, the Elephant Man, Dorian Gray and other assorted grave robbers and body snatchers of Victorian England. This time a handsome, talented and naïve Oxford medical student named Edward Newgate (a dashing Jim Sturgess) is granted an apprenticeship at an isolated and medieval lunatic hospital in the wilderness called the Stonehearst Mental Asylum. Edward is a promising “alienist”—a doctor who specializes in practicing asylum medicine. His goal, he says, is simply “the satisfaction of helping those in hell. Of all afflictions, I can think of none more cruel than madness.” He doesn’t know it yet, but he’s come to the right place—a dystopian house of horror that would scare the living daylights out of Dickens. He’s got the desire and training. What he’s seeking is clinical experience. He gets plenty.

The asylum superintendent is Dr. Silas Lamb (Ben Kingsley), an unorthodox modernist who believes in letting the inmates run the place. Edward is shocked and repulsed by the wretched and the friendless, encouraged to roam free, eat and live as normal members of society. One patient in particular intrigues him—a beautiful, cultured pianist (Kate Beckinsale) whose husband committed her because she resisted his “unusual sexual appetites” and bit his ear off. Ignoring a warning by Dr. Lamb’s weird assistant (David Thewlis) that nothing within the walls of Stonehearst is what it seems, Edward believes her to be innocent and sane, and in time, his fascination with this charming, sensitive, refined and educated lady and the power she has over the others leads to more than an infatuation. Then, on a midnight stroll in the subterranean dungeon beneath the asylum, Edward discovers the truth: here, in filthy underground cages, Dr. Lamb has imprisoned his predecessor, Dr. Salt (Michael Caine), who is the real hospital supervisor, his head nurse (Sinead Cusack) and the staff, who insist they are dying of a mysterious slow poison and beg Edward to rescue them from Lamb, “a lunatic demon” who makes the Marquis de Sade look like Mother Teresa. This movie is just getting started.

Before it ends, we see primitive electroshock treatments without sedation, bodies burned in a fire, a violent rape, a professor (Brendan Gleeson) who injects his patients with heroin before he parades them before his class, and other homicidal indignities. Clearly the inmates have taken over the asylum, and it is Edward’s mission to restore peace, order and sanity, and free his beloved. But wait. There’s a coda in which everything takes a left turn sharper than you can ever anticipate. To say more would spoil the fun. Just trust me when I say nothing will prepare you for the twisted finale, which moves the setting to lush, sunny Italy, where more madness awaits. Elegantly costumed and photographed, stealthily directed with a maximum of suspense and solidly acted, this is the best madhouse movie since Bedlam. The prediction is true: nothing at Stonehearst Asylum will ever be the same, and neither will you. 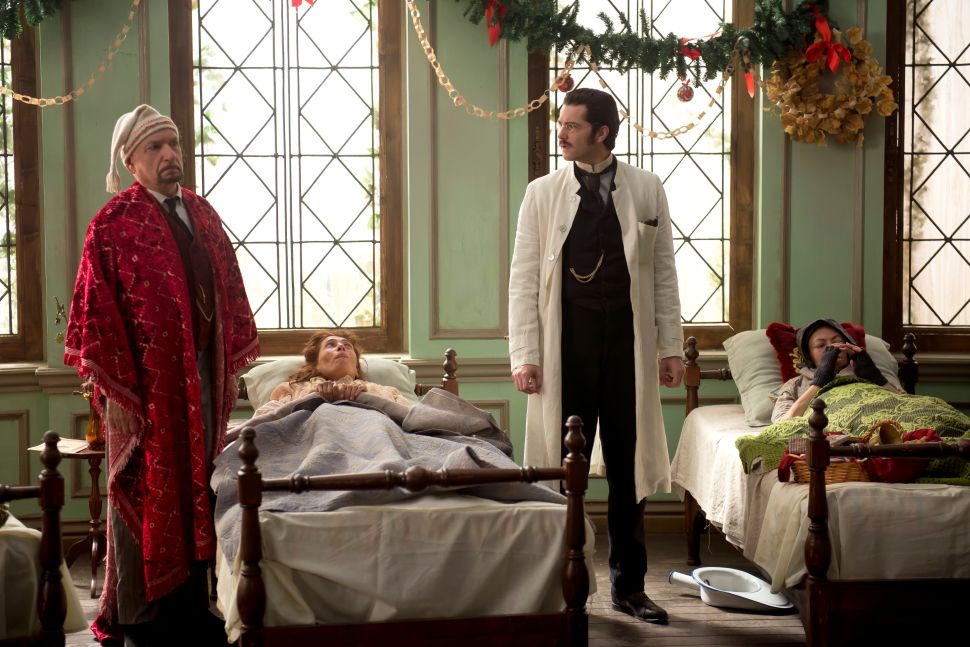