Last night, before I sat in a tiny library alone with Marina Abramović, I stood outside in the cold and wet of Tenth Avenue in a line that stretched down the block and waited. Very few would get to see or hear her. Most people wouldn’t see or hear anything at all. The thousands there for the exhibition all locked their belongings in lockers, strapped noise-canceling headsets to their skulls, donned blackout blindfolds and entered the gallery deaf and blind, tripping over own feet, knocking into other equally clueless people arms up, stumbling around like kids trying to find a pinata. This is Ms. Abramović’s new performance, “Generator.”

After marathon sessions in which the artist was certainly present, Ms. Abramović has decided to remove the artist and, well, nearly everything. It’s not like she’s actually gone—if you get sick of all this silence and want out you raise a hand and someone will lead you to the light, and that person is sometimes Marina Abramović—but you never see her, because all you see is nothing. If she does decide to pop in on the performance, you would never know.

Upon entering Sean Kelly, the gallery hosting the exhibition through December 6, there was little evidence of her presence. There was a mob of people trying to enter and several photographers paid to get shots of the mob. There was the local station ignoring the Ebola-infected man on the other side of Manhattan and instead capturing the goings-on at the gallery: “This evening’s opening is being taped by CBS News,” a sign read.

While waiting in line—and I had to wait in line, because Ms. Abramović insisted that “waiting in line is part of the experience”—I heard rumors of a blind and deaf dance off between Observer contributor (and my occasional sparring partner) Anthony Haden-Guest and the singer Rufus Wainwright.

(Update: I emailed to confirm this unlikely pairing, and Mr. Haden-Guest responded “Yes. But it was ME who lead!”)

And then I was at the front of the line—belongings locked, headphones strapped, blindfolds donned—when an assistant led me into the gallery, to be one with the darkness. I took a fews steps, then a few more, totally out of it. Was this heaven? Hell? Just kind of boring? I kept on bumping into people, but this didn’t exactly force me to confront my mortality or anything. It did feel nice to finally encounter a wall—limits!—but then someone started feeling our shoulders. Marina, is that you!

No, it wasn’t Ms. Abramović, because Ms. Abramović was in that small library sitting at a wooden table, sipping tea from a porcelain teacup. After exiting the gallery and gathering the stuff in my locker I was lead in and asked to sit down.

“What brought you to this kind of performance?” I asked.

“I’ll take over the interview now,” said Ms. Abramović. She was staring right at me. “When was the last time you wore a blindfold?”

I shrugged. Pinatas were probably involved.

Preach, Marina. And she’s relieved to be stepping out of the frame this time, letting those used to staring at her for a while just sort of sense her presence this time. She’s enough in the spotlight as is.

“People say, ‘You’re a celebrity,” and yes, but it’s more of a responsibility,” she said.

Indeed, her profile has risen in recent years—there’s the “Picasso Baby” stunt with Jay-Z at Pace Gallery, the HBO documentary, the collaboration with Lady Gaga, the movie she’s making with James Franco about James Franco’s life. She might be considered a household name at this point. Close to 120,000 people lined up in London to see her last show at the Serpentine Gallery, “512 Hours.” She’s also ranked fifth on ArtReview’s list of most powerful people in the art world, a fact that she mentioned to me in that tiny library.

“I’m trying to put performance on another level,” she said. “I would have never had the courage to do this before. I’ve worked my way up to it.”

And then after we left that little library, we walked by a computer at the Sean Kelly Gallery front desk, which was playing  a livestream of the blindfolded attendees in the performance. Who knew achieving consciousness looked so clumsy. 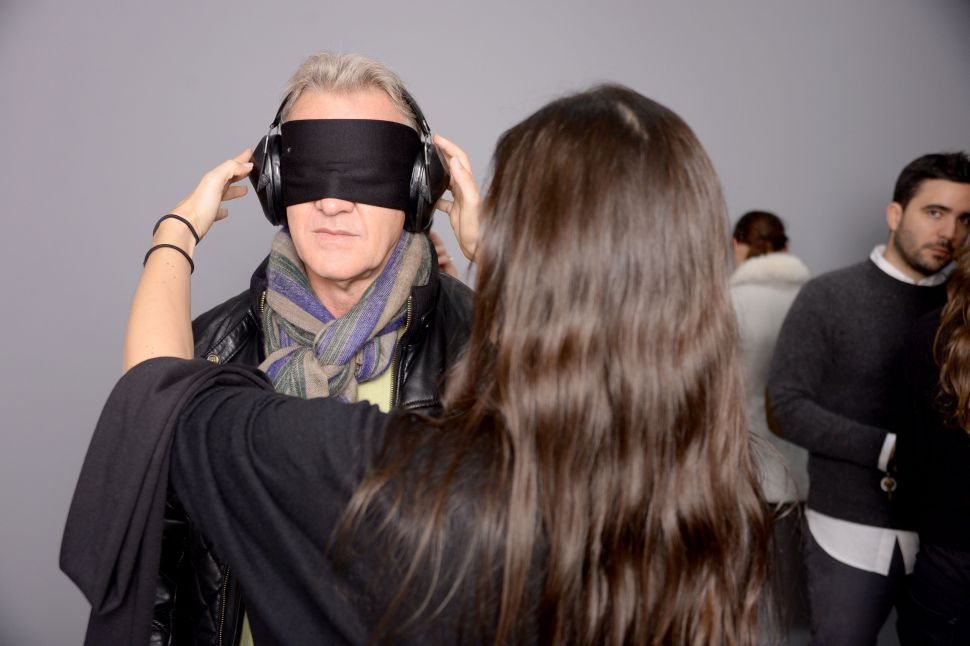