Preposterous, illogical, senselessly over-plotted and artificial as a ceramic artichoke, David Fincher’s Gone Girl is another splatterfest disguised as a psychological thriller about the disintegration of a murderous marriage that I find one of the year’s grossest disappointments. At one point, I turned to the woman next to me—a distinguished lady film critic—and asked, “Does any of this make sense to you?” “Not a word of it,” she replied. So why is it being drooled over by gushing websites as a “sensational hit”? The applause at the end of the screening I attended was tepid, and the reviews I’ve read are grudgingly mixed. Another example, I guess, of today’s hysterical, overhyped media reaction to everything confusing, overwrought and drowning in pretentious overkill. Gone Girl lives up to all of the above—and then some. It’s an ill-advised and poorly executed mess that shows a master craftsman at half-mast, casting around for a little controversy.

I didn’t read the book by Gillian Flynn, but could it positively have been as phony and contrived as the movie she has been unwisely asked to adapt from it? The dialogue is so laughable it borders on Saturday Night Live parody. Yes, it has the kind of requisite plot twists many so-called critics regard as necessary tools to make thrillers work, but not one of them rises above the status of gimmickry or stem from any realistic motivation. Worst of all, despite good acting from an elegant cast, director Mr. Fincher’s artfully staged violence and its endlessly changing tempos in narrative form, the movie is a stultifying bore. What might have worked on paper just lulls moviegoers weaned on cinematic slaughter into lethargy. Praised for its literary structure, the movie has entirely too much of it. I can’t remember the last time I had so many restless minutes in the dark checking my watch.

The pretentious palaver begins with the New York society wedding of Nick Dunne (a name that starts the whole thing off on a laughable note for starters; could it be that the author never heard of Dominick Dunne, always called “Nick”?) and Amy Elliott, the daughter of a snobby mother who has made a living stage-managing her daughter’s life into a successful series of Amazing Amy children’s books which, in essence, plagiarize her own childhood. Nick (Ben Affleck) and Amy (sublime Rosamund Pike, who has been enriching other people’s movies so long that it’s a treat to see her showcased as the star of her own) are both New York magazine writers who meet cute and marry even cuter in 2005, lose their jobs and their money, and move to a small, fictional town in Missouri to place his ailing father in an assisted-living facility.

Five years later, on the verge of their fifth anniversary, Amy vanishes into thin air. The first act of a movie that would make a much better play is about how miserable Amy is. Flashbacks contrast her glamorous previous life in Manhattan with her dreary working-class surroundings in the Midwestern suburbs, but otherwise do nothing to enlighten the mystery of what happened to Amy. Was she murdered? Everyone thinks so.

Act Two shifts gears and shows the same five years from Nick’s point of view while he searches for his missing wife with the help of his potty-mouthed sister (Carrie Coon, a most unfortunate moniker for any actress who wants to be a household name), a rough lady detective (Kim Dickens) and a crafty defense lawyer (Tyler Perry). They get clues from Amy’s diary, and from Nick’s off-screen narration, to no avail. While they click off the days, they come up with the conclusion that Amy was a clever, manipulative schemer who may have orchestrated her own disappearance and death, for no other reason than to pin the crime on Nick. Again, the question: why? The motive isn’t money; Nick doesn’t have any. So “Why?” becomes a simple question you find yourself asking for 150 minutes.

Act Three takes another left turn at the cross roads when Amy miraculously rejoins the living and starts the countdown to not one but several finales. The more the days waft by, the crazier she becomes. An innocent, naïve ex-boyfriend shows up to help her and she slits his throat with a box cutter. I offer this revelation not as a spoiler (there are more shocks to come), but to illustrate how none of this excessive plotting makes one lick of sense. It is never clear why Amy would frame Nick for her abduction and no reason why she would later lure a man to rape her violently. Walking into the cameras of the media dripping with blood, she just seems like one of the hapless wives of Dracula. Amy is obviously a raving psychopath, although there is nothing in her background to indicate insanity. Nick is not the dutiful husband he pretends to be. He’s one burner short of a stovetop, too. There’s nobody to root for or care about. And the movie is so choppy it looks like it was edited with pinking shears.

Meandering through the gimmicks in a daze, Mr. Affleck is like a glossy 8 x 10, suitable for framing, but anxiously in need of Photoshopping. As a toxic villain without much conviction, Ms. Pike manages to be both ravishing and riveting. Neil Patrick Harris, playing against type, is a toxic all-American red herring. Other characters enter the picture—Lola Kirke and Scoot McNairy as a trailer trash couple from the Ozarks who rob Amy, a predatory TV interviewer played perfectly by the delectable Sela Ward—but they never pay off by making any kind of coherent contribution to the plot. They’re nothing more than padding. It all seems manufactured, empty of the most basic human feelings. Even as a poisonous attack on marriage, it exudes mannered existentialism instead of a “gotcha” sense of “reality bites.”

I hated his Girl with the Dragon Tattoo, but I usually like the negativity in the dark, clammy subterranean ozone where Mr. Fincher bases his creepiest films (Se7en, Fight Club and the uniquely original Curious Case of Benjamin Button). The pointless Gone Girl is nothing more than an annoying case of showing off. 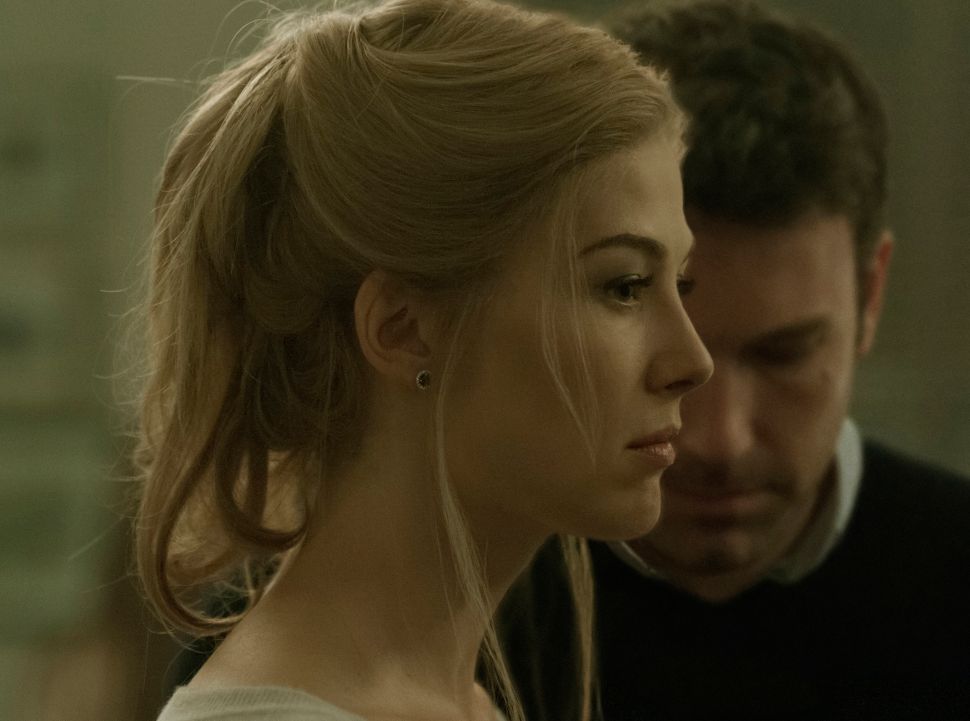