It’s unclear if it’s a glitch or just a really weird marketing tactic, but there’s something up with the listing for Taylor Swift’s new album on Amazon.

According to the AutoRip terms and conditions, the free MP3s are available to anyone with a US billing address, and as long as the order isn’t purchased as a gift. Those criteria seem pretty easy to meet. The MP3s, the website says, should appear in your Amazon Music Library within 48 hours. 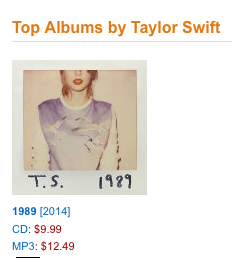