“I’m speaking out against Marty Golden as one of the worst examples of the old boys club and the broken system that is governing our state,” said Ms. Teachout. “What he is doing here is, his company, his family business has received over half a million dollars from campaign funds and state funds. And you don’t need to be a genius to recognize there’s something wrong with that. That we have a system that allows a state senator to instead of serving the people of Bay Ridge to be serving his own business and his own interest.”

Ms. Teachout noted that Mr. Golden has also used his government office’s website and mailers to promote events at the catering hall.

“He’s also a classic old boys club in a way that’s almost funny, if it weren’t true,” Ms. Teachout said. “The advertisement for the etiquette session that was on his website said it was going to teach women how to sit, stand and walk like a model. Well, I think far more important is to stand, sit and walk like a representative of the people.”

Mr. Wu–a law professor who coined the term “net neutrality”–heralded Mr. Kemmerer, a web developer, as both an old-fashioned anti-corruption crusader and as a new kind of cutting edge, tech-savvy pol.

“Jamie is exactly the kind of person we need in New York politics. He is in politics for the right reasons. He’s not going to the state senate to try and enrich himself. He’s not going to Albany because he’s interested in brokering a few deals to get campaign contributions in exchange for favors,” said Mr. Wu. “He shows that when it comes to the industries of tomorrow, when it comes to people who are thinking of the future, it is the Democratic Party and men like Jamie who are leading the way against the past, against Marty Golden, against the politics of yesterday.”

Both highlighted the need for a Democratic-controlled State Senate to push forward key liberal policies like public financing of elections.

Mr. Kemmerer said he had supported the long-shot pair against Mr. Cuomo and Ms. Hochul because of the governor’s handling of the anti-corruption Moreland Commission, and thanked them for backing him.

“You have been two candidates for everyday people, and you have valiantly fought against corruption, and for me that’s very special,” said Mr. Kemmerer.

The candidate said that, if elected, he would sponsor what he called “The Golden Rule”–a bill that would prohibit politicians from spending campaign money at any business where a member of their family works.

Mr. Golden’s camp dismissed Ms. Teachout, Mr. Wu and Mr. Kemmerer as a pack of radicals outside the mainstream of both major parties.

“It’s never a surprise when Occupy Wall Street gets together. It’s unfortunate when it comes to Bay Ridge,” said spokesman Ray Riley. “Jamie worked hard to try to keep Governor Cuomo from getting the Democratic nomination and Zephyr is returning the favor. It’s what some would call a political quid pro quo.”

Mr. Golden purchased the Manor in the 1980s, and sold it to his brother shortly before taking office. His wife continues to work there, and Mr. Golden continues to receive payments from his brother for the purchase of the building.

State campaign finance rules are notoriously lax, and candidates are rarely penalized for any expenditure they can demonstrate was somehow connected to their campaign. Mr. Golden has never been accused of any wrongdoing, though the Moreland Commission was reportedly examining his relationship with the catering hall and with a number of real estate developers.

Mr. Golden’s southern Brooklyn turf is predominantly Democratic, but is home to many socially conservative senior citizens, union members and Orthodox Jews. He has been re-elected five times since first winning the Senate seat in 2002, and is heavily favored to win again thanks to his vastly superior name recognition and massive campaign war-chest. 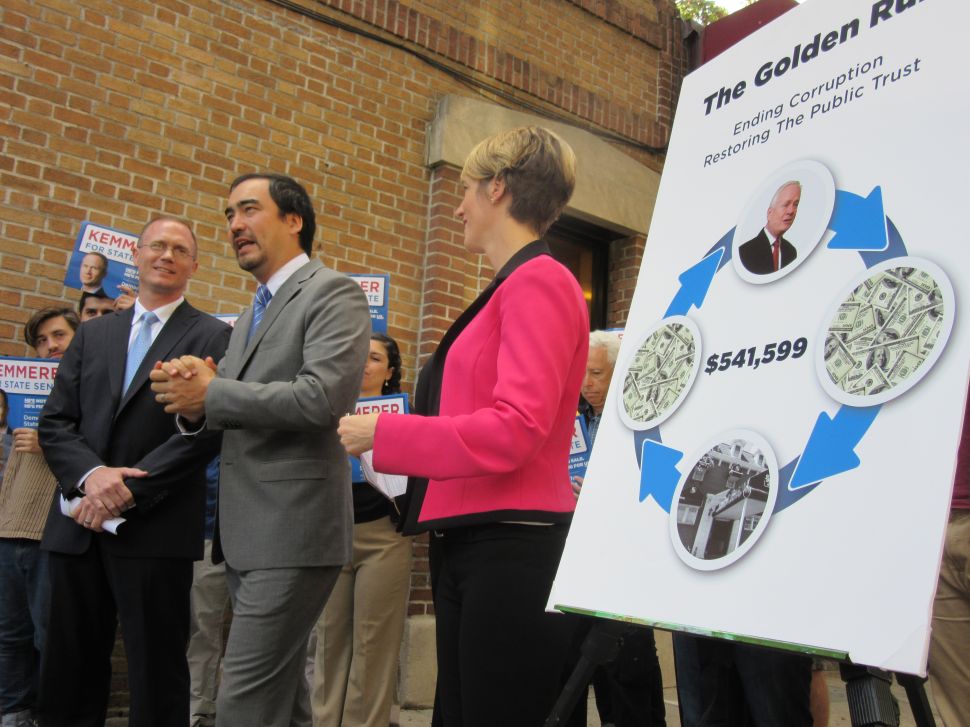