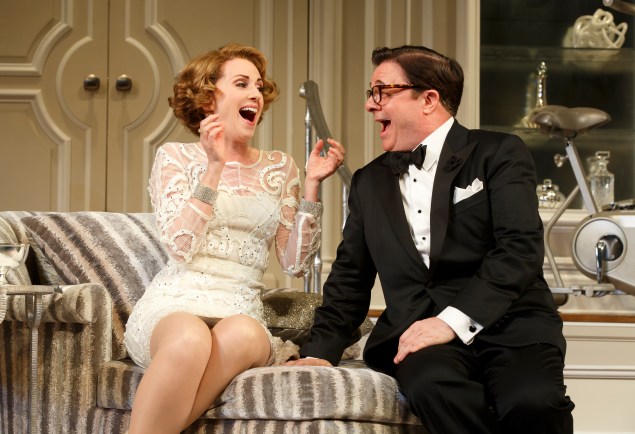 Megan Mullally and Nathan Lane in It’s Only a Play

When Terrence McNally’s show business farce It’s Only a Play originally opened in 1986, the critics didn’t enjoy the overloaded references to the famous and infamous denizens of the Broadway scene that formed most of the text. It only ran a week. Things have changed. In the new revival at the Gerald Schoenfeld, Mr. McNally’s re-written script spit-roasts and parboils everyone you ever heard of, and many you haven’t and don’t want to. Nobody escapes unscathed, and the audience chows down on the vitriol like concession-stand Milk Duds.

The scene is still the snowy opening night of a new play; the setting is the New York penthouse of the flaky, insincere lady producer with deep pockets where everybody who is anybody is anxiously waiting for the reviews. (Back in the day, it was always Sardi’s, where the cannelloni was hot even if the critics were tepid. Now it’s anywhere to save money.) The apartment is chockablock with boldface names, busily spouting one-liners: “I’m pretty sure I saw Rosie O’Donnell talking to the pope!” “Once you’ve done Chekhov you never want to do anything else.” “That’s what Madonna says.” Despite the noise, smoke and soggy hors d’oeuvres, disaster looms. The husband of the hostess has been mugged in a men’s room and Kelly Ripa has been hauled away after being viciously attacked by the family dog. Otherwise, it’s business as usual.

The nucleus of the opening-night clan gathers in the producer’s upstairs bedroom to watch the early TV reviews. As the rich but brainless producer once played by Christine Baranski, Megan Mullally is a naïve and clueless amateur who doesn’t know Lunt and Fontanne from Abbott and Costello. Next, she’s planning a revival of The Music Man with Audra McDonald as Prof. Harold Hill, which is not as demented as it sounds. In fact, as the play grinds on (fitfully, since only about one half of it hits the funny bone), Mr. McNally’s send-ups and put-downs begin to reflect so much truth about where the theater is going that if it were a movie, It’s Only a Play would look and sound less like a comedy than a documentary.

Stockard Channing plays the coke-sniffing, booze-guzzling ex-movie star addicted to plastic surgery, a convicted felon wearing an ankle bracelet attached by her parole officer. The director is a cynical, flamboyant nut case famous for his all-male Medea at BAM, played by Harry Potter’s pal Rupert Grint. The playwright is Matthew Broderick, who laments British imports, Disney musical cartoons in animal costumes and the tsunami of Kardashians. F. Murray Abraham plays a pompous critic, ranting about his once-august profession that has sadly given way to the blathering idiots of the Internet. Rounding out this motley crew is the actor who turned down tonight’s play to star in a TV series that will be canceled before the party’s over, played to the hilt by the hilarious Nathan Lane.

All of them are served by a stage-struck waiter named Gus (Micah Stock), who keeps everyone informed about the comings and goings downstairs as he freshens drinks and plops coats on the bed. (Entering with 10 pounds of balloons that look like plastic takeout containers, he announces Lady Gaga just arrived.) Plodding on, Mr. McNally fills two and a half hours with mean-spirited inside jokes updated to include inserts about James Franco, Hillary Clinton, Harvey Fierstein and Bill De Blasio. Some of them are really clever (Mr. Lane: “I thought Rock of Ages closed.” Ms. Mullally: “Oh, everyone thinks that.”) It’s like the latest installment of Forbidden Broadway, without the songs.

Under the expert direction of veteran traffic cop Jack O’Brien, the whole thing builds to a riotous reading of the Times review that decimates the writing style of Ben Brantley but is 100 times more amusing. Mr. McNally is, if my suspicions are correct, at last having his own revenge for every bad review of his plays that Mr. Brantley ever dished out. This time the author sends up critics as well as actors, writers, producers and audiences, savoring a few choice comments about the difference between Broadway and the movies, the future of the theater in general and serious dramas in particular. Acidly referring to Mr. Brantley’s slobbering raves for anything that originates in the West End, one wag even addresses the idea of moving the Tony awards to London “to save them a trip.” In the finale of an evening that adds up to a laugh a minute, everyone recovers from the bad reviews and surrenders to the notion that, in the long run, every play the critics pan is “only a play”—even if it’s the one we’ve just seen. 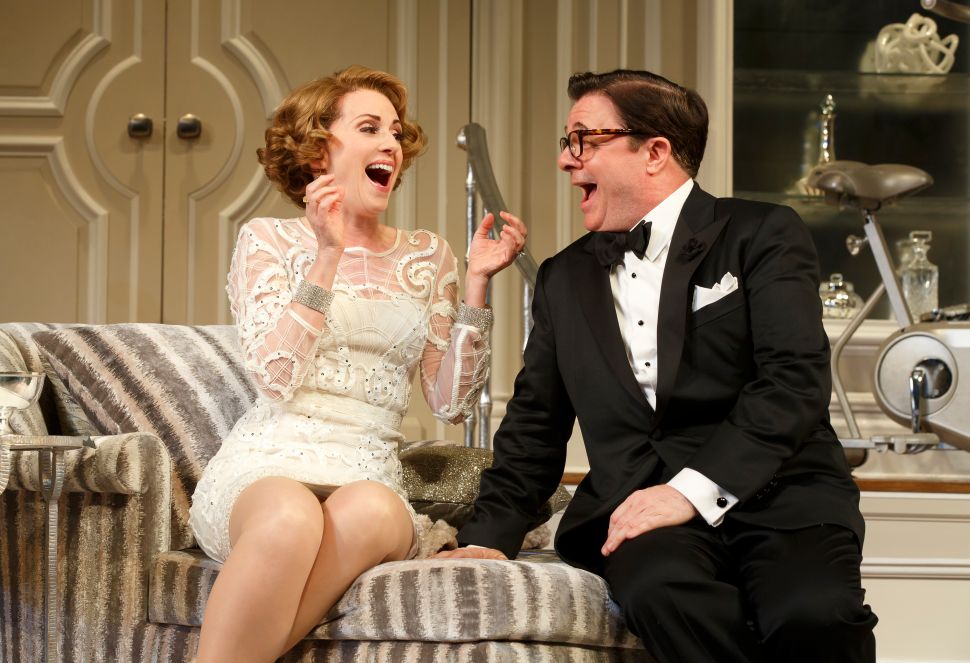 Filed Under: Theater, Theater, Reviews, Broadway, Terrence Mcnally, it's only a play