“Not a day goes by that I don’t walk down 21st Street and think about Superstorm Sandy,” said Casey Kaplan, owner of an art gallery of the same name between 10th and 11th avenue on 21st Street in Manhattan. Two years ago, floodwater crept up the streets of Chelsea, eventually reaching five feet deep in some spots, and Mr. Kaplan “more or less lost the gallery,” he said. “I had to rebuild the gallery and all of its contents.” There were costs that his insurance settlement did not fully cover. “But it costs so much to fight an insurance company, so I just accepted the settlement.” What’s more, his next policy had higher premiums and provided less coverage.

So Mr. Kaplan is moving his gallery Northeast to what is called the Flower District where, he noted, “It’s not a flood zone.” Other galleries are moving there as well, attracted by lower rents and larger spaces (opening in February, Mr. Kaplan’s new space, with 10,000 square feet, is double the size of his current gallery). And the dealer noted, “My insurance costs will be significantly less.”

Two years after the “storm of the century” hit New York City, the art industry is still wrestling with the aftermath. Whether that has meant relocating out of hard-hit Chelsea, coping with skyrocketing insurance premiums, operating without the safety net of insurance, going to court or just moving everything possible to a higher floor or a pricey storage space, the storm that devastated Chelsea on and following October 29, 2012 is still being keenly felt.

For most dealers, even the most cautious, Sandy was a great and unpleasant surprise, even a heartbreaking one.  The year before Superstorm Sandy had brought Hurricane Irene, which resulted in relatively little damage, with flooding of six inches of at most. So, in 2012, many gallery owners “prepared for another Irene but got something quite different,” said Jon Lipton, president of Castle Rock Insurance Agency. Safety measures included putting “artworks up three feet—but Hurricane Sandy surged to five feet.”

Some galleries sandbagged and nailed shut the doors, but forced its way in anyway, and gallery staff simply found that it was more difficult to get back inside. Other galleries built temporary shelving for artworks but didn’t understand that the ebbed and flowed in the manner of tides. “It would come in, pushing the shelving one way, then flow out, pulling it another way, destabilizing the shelves and causing the artworks to tumble into the ,” according to Claire Marmion, owner of The Haven Art Group, which provides art management and insurance claims assistance to galleries and collectors.

One of the more severe Superstorm Sandy losses occurred at Printed Matter, at 22nd Street and 10th Avenue, which is not a gallery but a nonprofit organization devoted to the exhibition of artist books. Much of its inventory, consisting of 9,000 books and other artworks, as well as the organization’s archives dating back to 1976, was stored underground, in the basement, which flooded badly.

The loss of the books and other artifacts was estimated at several hundred thousand dollars. But Printed Matter was unable to make an insurance claim, as it is insured as a book store rather than as an art gallery and is covered by a general policy that didn’t include a separate art rider. Still unable to afford higher levels of insurance protection today, the organization only stores “mops and hardware, non-inventory things in the basement, which can be cleared out fairly quickly if another storm is coming,” said Max Schumann, Printed Matter’s associate director.

The Jack Shainman Gallery on 20th Street between 10th and 11th avenues suffered extensive damage to photographs stored below street level two years ago. “We still have a basement, but we no longer use it for storage,” said Elisabeth Sann, associate director of the gallery.

The basement’s current use is for “private viewings” of artwork and otherwise is mostly empty. Last year, the gallery added two new spaces, up four blocks on West 24th Street where there are “anti-flooding valves” and a 30,000-square-foot converted schoolhouse in Kinderhook, N.Y., where there are exhibitions and where almost all the gallery’s inventory will be stored.

Since the storm, finding better places to store and better ways to protect inventory may be the largest lesson learned by the gallery community. “We are more cognizant and wary of the potential for damage, particularly in the area of storage,” said Steve Henry, director of the Paula Cooper Gallery. Most of the gallery’s art, when not on display, is kept in art storage facilities elsewhere in Manhattan and New Jersey.

Stefania Bortolami, owner of Bortolami Gallery on 20th Street between 10th and 11th avenues, also noted, “We keep a minimal number of things in our ground-floor storage,” relying instead on sites in New Jersey and Long Island City. “We expanded our storage space and increased our bill.” That increase is in addition to the gallery insurance policy whose premiums rose 25 percent.

Indeed, Superstorm Sandy changed the “insurance climate,” according to Nicholas Reynolds, vice president of Berkley Asset Protection, one of the main providers of insurance coverage to Manhattan art galleries. “Premiums have gone up for all galleries, but most of all for ground-floor galleries in Chelsea, 20, 25 or 30 percent.” He added, “no one is providing flood insurance” for galleries that are using their basements for storage. And galleries that have not developed a disaster-preparedness plan “may receive a policy, but one that excludes coverage for floods.”

An acceptable disaster plan, he and others in the insurance field noted, includes specific procedures for getting valuable art and property to safety, staff training, emergency supplies (such as fans, mops, brooms, storage bins on wheels and gasoline-powered generators) on hand and a list of contact numbers (for security alarm services, utility companies and one’s insurance broker, as well as gallery staff). “Sandy is now a benchmark,” Mr. Reynolds said.

William Fleischer, an insurance broker with Bernard Fleischer & Sons, which works with a number of Chelsea art galleries, noted that a growing number of policies are written with “stop limits” or caps on the amount of damage that an insurer will cover. Lowering the cap by 25-50 percent may keep the insurance premium from rising. “Galleries have realized the value of risk management and risk tolerance.”

Another way in which some galleries have looked to lower their risks, according to Ms. Marmion, is to change their exhibition schedules. “Objects that are more fragile or more difficult to move may be exhibited in January or March, after the hurricane season,” she said.

Some galleries have chosen to do without art insurance entirely, while others have found that their insurance carrier no longer will write a policy for them.

One of the fastest-growing companies writing policies in Chelsea is Lloyd’s of London, according to Steven Pincus, managing partner of DeWitt Stern, an insurance brokerage firm. “Lloyd’s has stepped in where domestic insurers have left a void, particularly in coverage for damage. Because Lloyd’s is a worldwide insurer, it has a greater ability to spread risk.” As an insurer of last resort for some galleries, Lloyd’s also is able to charge higher premiums, he added.

What used to be called “hundred-year events” now seem to occur far more often, and low-lying coastal areas such as Manhattan are seen as likely to experience flooding on a more regular basis if predictions of ocean rises are correct. Mr. Reynolds said, “We all have to prepare ourselves.”

Taking no chances, Postmasters Gallery, which suffered major flood losses during Sandy, moved from its Chelsea location in October of last year to Franklin Street in Tribeca. It’s “one of the highest points in Manhattan,” explained gallery director Magda Sawon. 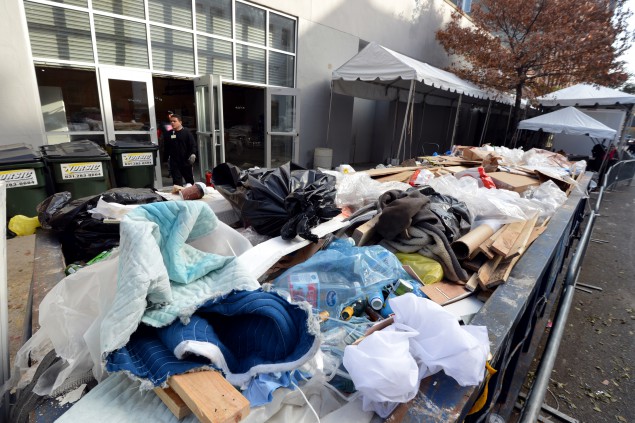