Many of the television shows you’ll find in Netflix’s formidable archives are excellent. Many more are garbage. But then, there are some that are sort of… both? These are the best worst shows on Netflix*, and this is one of them.

I consider myself a connoisseur of ghost shows, which is a little like saying you consider yourself a connoisseur of overprocessed American cheese (for the record, I happen to be a connoisseur of overprocessed American cheese). In spite of that, I’m also a staunch, self-loathing skeptic—which is exactly why I was drawn to Paranormal Home Inspectors. The producers enlist both a psychic and a home inspector to determine whether there are rational explanations behind seemingly haunted houses. That might sound like a promising twist on the genre, but it is bad. Very bad, even. It is also extremely watchable.

The Premise: As its vaguely English-accented narrator will gladly tell you over and over again, this show seeks to combine natural and supernatural investigation with a team of three experts: intuitive healer Nadine Mercey, certified home inspector Brian Daley, and paranormal investigator and researcher Michelle McKay.

The Details: Paranormal Home Inspectors originally aired on Investigation Discovery in Canada, from 2011 to 2012. There are only 13 episodes, but then again, “only” isn’t really the right word. It is sort of amazing that there are as many as 13 episodes.

The Cast: Home inspector Brian is unfailingly unimpressed by the knocks, rattles, and shadows that keep you up at night. Why does that creepy basement light keep flickering? The bulb wasn’t screwed in all the way. Why is your daughter’s room mysteriously cold? Well, you’ve blocked all of the air vents with furniture. How did the bathroom door—which doesn’t even have a lock—manage to trap you inside? Actually, it does have a lock. (This is a real plot point in episode three.)

Brian marches through the homes with a clipboard, checking off spooky happenings as he debunks them. “There’s nothing unexplainable or strange in this house,” he’ll say. “Everything has a plausible explanation.” He sounds great, right? He is, but here’s the problem. Instead of turning to paranormal or psychic explanations only when scientific ones fail, the show consistently discounts Brian’s sound, physical evidence (of which there is so, so much) in favor of utter bullshit. And utter bullshit is Nadine’s department.

At any given point in time, psychic Nadine is about half a minute from total hysteria. As soon as she walks into a house, she enters a physical meltdown: she can’t breathe, she feels heavy, she has goosebumps. She screams, then wildly giggles, then screams again. She more than once reports that the spirits are praising her for doing such a good job. She is “spiritually pushed” from one building, and declares “I’m feeling sick, nauseous, irritable, I want to go” as she leaves another.

For context, here’s how Brian and Nadine’s dynamic plays out in the second episode. The homeowner worries that the pale markings that have appeared over his bed are “some kind of writing, or some kind of scribbling” from beyond the grave. With a laugh, Brian quickly identifies them as residue from old wallpaper bleeding through the paint. But only a few minutes later, the same sight has Nadine riveted. “Is this for real?” To get a better look, she climbs—with her shoes on—onto their comforter. “I see fingers right here. It’s like a bone. Hieroglyphics.” Yup, okay, sure.

As you’d expect from grown adults who’d willingly consent to appear on this program, the homeowners are themselves a motley crew. The clear MVP is Christa, a pregnant woman who believes that dark spirits have followed her for her entire life. Christa claims to wake up with mysterious claw marks on her back, and was once “thrown” out of a reclining chair. Hmm. After hearing Brian’s summary of her home’s physical shortcomings (of which there are alarmingly many, including gaps around the storm door and a mysterious lack of insulation), she abruptly leaves the room. She takes off to the basement, where she repeats out loud, to no one in particular, “I’m not crazy, I’m not crazy, I’m not crazy.” This is the scariest thing that happens in the entire series.

The Science, If You Can Call It That: The paranormal investigative crew’s superficially high-tech equipment is never explained. The image and sound quality is so jerky and erratic that nothing particularly scary or unusual can ever be discerned. It’s chaos. Whenever Michelle hears a motion detector go off, she frantically scrambles across the house to examine it. In one episode, she dashes outside after an apparent specter. “Something’s walking!” she shouts, “I can hear something walking in the leaves!” Given that you are outside, probably an animal?

For their part, her team members aren’t exactly the height of professionalism either, literally shrieking when they hear unexplained noises. One of Michelle’s assistants ends up crying and shivering outside during an investigation. The camera zooms in unsteadily on her cross pendant. “Get out,” she instructs the spirit within her (according to Michelle), “Get out of me.” Another assistant leaves after complaining of a headache, never to return. They make Ghost Hunters look like it’s gunning for a Nobel Prize.

The Budget: It’s not that the production values are terrible—I mean, they’re not good, that’s for sure—but they’re dizzyingly inconsistent. Otherwise unremarkable interviews are intercut with bonkers B roll, featuring a stop-motion animation that depicts stuffed animals scurrying across the carpet, or what I can only imagine is an underpaid production assistant coerced into half-heartedly embodying a ghost. Within a single episode, footage will be replayed multiple times with a Tommy Wiseau flair.

Favorite Quote: One beleaguered homeowner memorably explains the cell phone interference he’s experienced in his brownstone: “There have been times when it almost sounds like Satan has taken over the call.”

Favorite Moment: I fell in love with this show in its very first episode, when Brian concludes his cut-and-dry tour through a home by looking down a drain in its creepy basement laundry room. He’s uncharacteristically perturbed by what he sees.

“I’ve seen a lot of things down drains but I’ve never seen anything like this. It’s not what I expected to see at all,” he says. “There’s things down there that are just kind of scary.”

Cut to commercial. Nadine visits the house, then Michelle, and… that’s it. Episode over. We’re never told what Brian saw. I am not kidding. It is downright surreal. This, honestly, is everything you need to know about Paranormal Home Inspectors.

*This show can also be found for those of your who still live a Netflix-less existence (and…why?) at Hulu.com.
[hulu id=axstxxdssr3lt4eiagklia width=512] 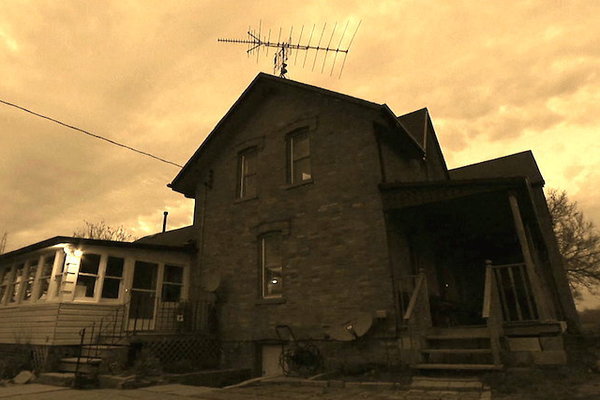