There’s an unmistakable spookiness in the air and everyone’s acting a little off. The candy is flowing like wine. If you are lucky enough to have a tree in your neighborhood, you might have noticed its leaves dying and unceremoniously falling off.

Which is all to say: it’s Halloween in New York! So what are you doing tonight, huh? Do you know yet? Do your friends know yet? Are you kind of anxious about the pressure that accompanies going out on a holiday, and are you especially anxious that your costume is not hitting the right mark between sexy and hideous?

Well, don’t worry, because these are the normal pre-FOMO feelings of holiday celebrations in the 21st century. Luckily, we have assembled a list of some of the chic-est parties and events happening in New York City tonight.

1. Gotham City Mayor’s Ball at Refinery Rooftop. This party is an ode to Batman, so get your stretchy black outfits ready. Starting at 9 p.m., guests can sip on “penguin’s punch” and dance to DJ Jonesy. There will also be an aerialist, an acrobatic pole artist, an illusionist, a stilt walker and a juggler roaming the joint. The event is free and non-ticketed, but to reserve a VIP table, email reservations@refineryrooftopnyc.com.

2. The Jade Hotel’s Ghosts of Hollywood’s Past costume party. The Jade’s speakeasy-esque restaurant Grape & Vine hosts this celebration of ghostly film stars, and includes a three-hour open bar sponsored by Moet Hennessy. It’s invite-only and costs $50 at the bar, but at midnight, the party opens at the public. If you’re into drinking games (and you have a high tolerance), take a shot every time you spot someone dressed as an undead Marilyn Monroe or James Dean.

3. Drinks at Grand Banks, the floating boat bar off Hudson River Park in Tribeca. The Sherman Zwicker is a historic “schooner” (that word will never not remind us of Kyle McLachlan’s manhood, thanks SATC), which hosts the Grand Banks bar on its deck. This will be the bar’s last happy hour until next year. It starts at 2 p.m. and ends at 11 p.m., and may be your last chance to get drunk on a boat this year.

4. The Mad King’s Masquerade at Monarch Rooftop Lounge. With a twisted-royalty theme, this party has a $20 cover and boasts an hour-long open bar starting at 9 p.m., which should help you get over the initial horror of hanging out in midtown after the workday is done.

5. Dia de los Terribles at the Wythe Hotel in Brooklyn. A great excuse to go nuts with face paint, this Day of the Dead-themed party has a $20 cover and its one-hour open tequila bar lasts from 8 p.m. to 9 p.m. Starting your night with free tequila is only acceptable about once a year so why not tonight?

6. Cirque Du Freak at 55 Gansevoort, if you like gore. With a $25 cover, this event provides “eyeless clowns, trunkless elephants, and a three-armed lady.” What more could you want? An open bar, obviously. They have one of those, too, from 9 to 10 p.m.

7. Halloween 54! at Cameo in Brooklyn. This disco-themed bash is the perfect place to deploy your favorite velour Bianca Jagger costume. No open bar, but beers are $4 and well drinks are $5 before midnight.

8. Halloween in the Black Lodge, Glasslands’ Twin Peaks-inspired party in Williamsburg. Tickets are $5, Twin Peaks and David Lynch-inspired movies are being screened, and it’s safe to say this is what we would be doing tonight if we didn’t already have plans… Is it too late to cancel? 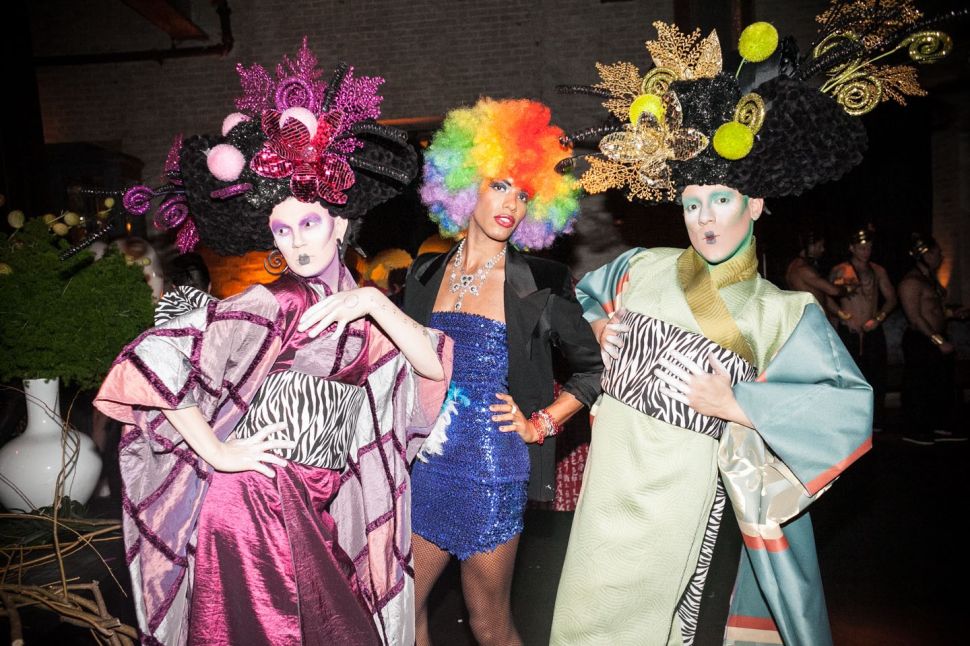