When someone you thought you had an alliance with ends up betraying you at Tribal Council:

DON’T: Believe anyone who tells you there’s a “method to [his] madness” that somehow involves him voting against you, all for the purpose of “further advancing [your] alliance.” Remember, Baylor — Josh is an actor, and acting = lying, except with more costumes and jazz hands.

When you want to make sure you’re in peak physical condition for challenges:

DO: Engage in light physical warm-ups.

DON’T: Go so overboard that every female in your tribe wants to punch you in your stupid six-pack. Some examples of inappropriate warm-ups include this:

Side note: LMAO what in the actual hell is Dale doing here?

When you’re hanging out around camp:

DO: Make yourself useful and tend to the tribe’s fire, because “fire is life” or whatever Jeff Probst says when he’s trying to prove he has some semblance of a purpose on this show.

DON’T: Use the flint to light said fire, and then casually toss the flint ~over there~ onto the ground amidst the endless feet of sticks, leaves, rocks, and other shit that literally looks exactly like flint.

When you get to the Reward Challenge and learn your twin sister’s been voted off the other tribe:

DON’T: Cry for the FIRST TIME IN 10 YEARS, as if your sister’s literally been offered up as a human sacrifice to the gods of reality TV. It’s annoying. It’s also annoying when Natalie points out that she and Nadiya were way closer than most of the other partners, because some of them have only known each other for five years, but they’ve known each other their whole lives, since they were BFF zygotes. Or one, not-yet-separated zygote. Or however that whole twin thing works.

When you find out the reward challenge involves really delicate balancing and coordination:

DON’T: Put up your one tribe member (John Rocker) who most closely resembles Grawp from Harry Potter.

DO: Say LITERALLY ANYTHING BUT THIS when Jeff Probst asks how you feel about losing a challenge to your girlfriend: “Remove the friend part — I’m losing to a girl.” GOOD GOD, COME ON, JOHN.

After you’ve won a bunch of fishing gear in the reward challenge and then remember, “Oh shit, we still don’t have any flint”:

DON’T: Try to negotiate with Probst by asking if you can trade him some crummy ass beans for more flint, and still keep the fishing gear. This won’t work for a number of reasons, including a) Probst is a big ol’ jerk who delights in making your lives harder, and b) Probst is dining on fois gras and filet mignon back at his hotel and doesn’t give a shit about your stupid beans. Ultimately, Probst gives Coyopa an ultimatum: it’s either the fishing gear, or new flint. They take the flint.

When you’re stuck on Exile Island with a known racist, bigoted, homophobic asshole:

DO: Be positive, like Jeremy, and acknowledge that maybe John Rocker has changed from his previous racist ways.

Then, once the two of you are buddy buddy, DO: Be all, I will vote off your girlfriend, Julie, ill-fitting tube top and all, if you let anything happen to my wife, Val.

When the Elimination Challenge requires you to try to push members of the opposing tribe off a floating platform:

DO: Ignore everything I ever said about your stupid-looking squats because oh my god, Jon just pushed all 600 pounds of cold, hard John Rocker off the platform.

DO: Accept responsibility when you straight-up suck at a challenge. There’s a special place in somewhere even worse than San Juan del Sur for women who blame their own failure on another woman being “big.”

DON’T: Underestimate Dale. NEVER UNDERESTIMATE DALE, DAMMIT. Not only can the man start a legit fire in a freaking coconut shell, but he can also hold his own in physical challenges a. LOVE YOU DALE XOXO.

When your tribe is starting to realize you’re that asshole baseball player who said a bunch of terrible things a few years back:

DO: Use your clue from Exile Island to scrape at the ground a bit and find an Immunity Idol. Oh great, another week of John Rocker!

When your tribe is sentenced to Tribal Council and you have zero Immunity Idols, plus no real alliances:

DON’T: TELL PEOPLE YOU HAVE TWO IDOLS, VAL. That is literally the worst strategy imaginable. Sure, it might make people not want to waste their votes on you, but if they do vote for you, you’ll be totally screwed because YOU IN FACT HAVE ZERO IMMUNITY IDOLS. Unsurprisingly, Val’s terrible tactic backfires, and when everybody inevitably votes for her, there’s nothing she can do but snuff out her torch and say San Juan Del See Ya L8er to the rest of the Coyopa tribe.

Bonus: When you want me to love you more than I’ve ever loved any Survivor contestant before:

DO: Describe all of your tribe’s difficulties using elaborate Broadway metaphors. Like Josh, re: Coyopa’s inability to work together:

It’s kind of like a Broadway show that starts their previews, and all of a sudden they thought they had a great show, and all of a sudden the audiences hate it. So what they do is they stop, and they re-work the show — they take out songs, they put other things in, and then they do it again and have an opening night with all the changes and they come out strong. So we’ve got to make some changes to make us stronger, coming out. 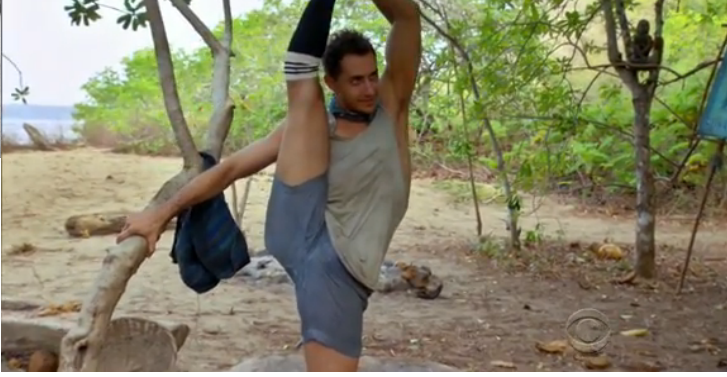