When Josh keeps insisting there’s a method to his madness and that your alliance is strong, and yet somehow you narrowly avoided elimination at last night’s Tribal Council:

Meanwhile, Josh tells the camera he wants to keep the guys’ alliance strong, and that means Coyopa’s two remaining women will be next on the chopping block. Sucks to suck, Baylor.

When a tropical storm is about to vom all over your campsite, and you make the announcement that your tribe should prooobably fix up your shelter’s shitty roof:

DO: Wait at least 15 minutes before kicking back and taking a nap, especially if said nap is taking place inside the shelter that you’ve literally just commanded everyone else to start fixing.

“What have you done today?” Natalie demands of Drew, as she delivers him a completely warranted poke in the face with a palm frond. “Tell me one thing you’ve done. Watched us weave, and hung out while everyone else is working.” Still, Drew claims he’s an asset to the tribe. Asset? More like Ass-hat, amiright?! Anyone? Anyone?

When you’ve allowed Val to get voted off your tribe, after expressly promising her husband, Jeremy, that you’d protect her:

DO: Find a way to apologize to Jeremy.

DON’T: Do it publicly, in front of your entire alliance, who now knows you were secretly working against them. It’s truly stunning how many poor decisions John Rocker makes.

When you’re forced to face off in a Reward Challenge against your hard-working, yet aging father:

DON’T: Listen to Jeff Probst. I know we’ve been over this before, but I want you to especially not listen to him when he delivers crapola like this: “Son would love to beat father, Pop would love to remind his son that with age comes a lot of experience and wisdom.”

DO: Forget about being a manly Louisiana firefightin’ man, and weep your little heart out when you ultimately defeat your dad. It is sad. Childhood is fleeting. You’ve just lost your innocence. Your ol’ Pa isn’t the infallible hero you once thought he was. You’ll now have to defend yourself in this big, bad world of people who want to do you harm. CRY, YOUNG WESLEY, CRY.

When you’re pissed because John Rocker didn’t do enough to keep your wife on the show:

DO: Turn the entire Hunahpu tribe against him by filling them in on his past racist and homophobic behavior.

DON’T: Feel bad about it.

When you’re sent to Exile Island with someone from a different tribe, not to mention a completely different walk of life:

DO: Put your differences aside, and realize that some things are universal: namely, the joy of consuming a bucket-full of dirty, are-you-sure-those-aren’t-poisonous Nicaraguan snails.

Josh and Keith make the most adorable BFF odd couple ever, and although Keith declares he’s drawing the line at spooning, I still kinda hope they cuddled, at least a little.

When the Immunity Challenge requires you to attach yourself to a partner and scamper, as a unit, under some wooden thatching:

DO: Pair up with Josh. I can only assume that Josh’s theatrical repertoire includes Cats, because holy hell, can that man slink.

DON’T: Be terrifyingly angry when your tribe loses, again.

As John Rocker makes a fuss, Natalie, on the other tribe, can’t contain her anger at him. She calls him out for poor sportsmanship, and also for being racist and homophobic, and then commands the rest of his tribe to vote him off. Get it, girl.

When your girlfriend, Julie, is trying to defend you in the face of Natalie’s accusations, and claims they “don’t know [you] personally”:

DON’T: Shout at Natalie, like a rabid, violent maniac, “If you were a man I would knock your teeth out,” and “take all your stuff down — let’s fight.” It’s just a hunch, but those don’t seem like the kinds of things that’d make your tribe want to keep you around, no matter how good you are at using that fishing spear.

When you realize, “Hey, maybe it would be a good idea to vote off that scary guy on our tribe who likes yelling about fighting people”:

DO: Give John Rocker a taste of his own trickery.

John thinks he’s running the show, convincing Baylor and Jaclyn to join him in voting off “dead wood” Dale, when actually he plans to stick with da boyz’ alliance and vote off Baylor. Meanwhile, mastermind Josh convinces a co-ed crew to unite and vote off John.

When it’s time for Tribal Council, and your very existence has made the majority of your tribe scared for their lives:

DO: PLAY THE IMMUNITY IDOL THAT YOU HAVE. See, John, the way Immunity Idols work is that they give you Immunity. It seems crazy, but it’s just that simple.

Thinking he has the voting under control, our pal John Rocker decides not to use his Immunity Idol. He proceeds to get voted off the show, and the majority of Coyopa is super relieved. 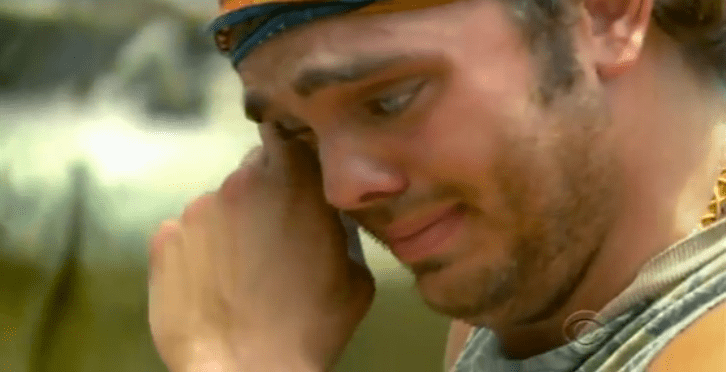