Do not mess with Will Gardner’s memory, Sweeney Todd! (CBS)

So, if you know anything, you know that Linda Lavin makes everything better. Robert and Michelle King know this, because they are true patriots, and so our episode opens with Linda Lavin as Cary’s put-upon, overworked pretrial services officer. She asks him a lot of very specific questions and he admits to having a beer. (Isn’t that the universal lie of all time? Like, isn’t it always more believable that someone has had no drinks than that someone has had ONE BEER?) Something he told Linda Lavin in this scene is going to come back to bite him. It has to.

Meanwhile, the case of the week has Richard Thomas suing a fellow farmer for brown-bagging, or replanting patented seeds. You think this is going to be a straightforward case with the usual agricultural esoterica and fun plot twists. You think that, but then, as always, The Good Wife laughs in your face and then slaps you for being so obtuse. Ordinarily you don’t like to be slapped. But when The Good Wife slaps you, you beg The Good Wife to never stop slapping you. Somehow, we end up in what’s called “binding Christian arbitration” as an antidote to all the arguing and fighting happening in regular court. See, this is the stuff that fascinates me. Not the fun, interesting, obscure legal stuff – the show’s been doing that well for years now. To tell a story about Christian arbitration to a CBS audience (which, lezzbereal, is probably more reliably, demonstrably Christian than the audiences of many other networks) is to walk a fine line, in which the story must be told honestly, but not cynically. It’s such a tall order that a lot of shows wouldn’t go near it. This is also a great way to get Grace back into the show, and to advance the relationship between Alicia and her daughter. (Although, I’m with you, Grace – Alicia sounded hella surprised when you said something smart.)

Grace gives Alicia some Bible verses she can use to challenge the notion that intent is a prerequisite for establishing guilt. Alicia is able to successfully do so, but before long, it becomes clear that Christian court doesn’t stop people from fighting. You can go to regular court or Christian arbitration, but people are petty, imperfect squabblers who can’t stop needling each other. Well, that’s at least true for the folks on The Good Wife. (Speaking of which, those brief intercuts of the infighting among Diane, Cary, Alicia, and Taye Diggs should have been given more screen time. Mostly because they’re interesting, but also because Taye Diggs. And please, please, please more drinkytime confessions between Alicia and Taye Diggs. The Good Wife owes this to America. Nay, to the world.)

Diane gleefully informs Cary that the State’s Attorney’s key witness, the guy who wore the wire, has vanished like a fart in the wind, as Warden Norton from The Shawshank Redemption would say. Then Diane says the dumbest thing ever, which is that the judge will likely dismiss Cary’s case. I am beginning to wonder whether or not Diane has forgotten what show she’s on. This will absolutely never be that easy. And it isn’t, because now ASA Polmar wants to revoke Cary’s bail. The going theory is that Cary saw Kalinda, and then Kalinda saw Trey Wagner, the CI in Bishop’s crew, and then Wagner disappeared. So they must have been playing telephone, in direct violation of the terms of Cary’s bail. But Linda Lavin saves the day, and Cary stays out of jail. I mean, he had to, because the show doesn’t work with Cary trapped in the hoosegow.

Alright, ‘shippers, get your ‘shipper hats on, because we need to talk about Kalary. This is the relationship on The Good Wife that confounds me most. After Cary and Alicia broke away from Lockhart/Gardner, it appeared that Kalinda was keeping up her relationship with Cary so that she could spy on him for Will and Diane’s benefit. But now that the dynamic is wildly different, I’m struggling with what exactly they are to each other. Friends with benefits? On the way to a relationship? I get no sense that they actually care about each other. Strike that. I think Cary’s always had a thing for Kalinda, but I have no idea whether it’s reciprocated, because Kalinda is approaching automaton territory. Is this the same woman who, when Alicia wrote her off for sleeping with Peter, got into an elevator and broke down crying? She has become completely inscrutable to me, and the memory of Kalinda as a character juicy enough to inspire Emmy-winning performance fades with each passing episode.

State’s Attorney Castro tells Alicia that they’ll dismiss Cary’s case if he rolls on Lemond Bishop, the scariest person on earth. But as Alicia points out, Castro doesn’t go to Cary or Diane. He goes to Alicia, who he’s sure is running, because she has to run. I don’t see how the show can keep all this up, only to have Alicia actually not run for State’s Attorney. This is part of Alicia playing hard-to-get, a game that has never ended well for me. But maybe I can take some notes from Alicia, since she’s clearly a master of it. Not even Steve Inskeep will shut up about Alicia running for State’s Attorney. Who’s next? Oprah? Yup. That’s how they are in my mind. Right below Oprah is NPR’s Steve Inskeep.

Alicia puts on her best cream-colored “yell at my husband” suit and goes to blow up Peter’s spot, only to run into Gloria Steinem. This is an awesome cameo, but when it comes to awesome celebrity cameos, I’m kind of like a puppy. I will eat whatever you put in my celebrity cameo food bowl, so please, The Good Wife, I beg you, please watch how much you put in the bowl, because no matter how much you do, I’ll eat it all and get really sick. That’s a long, laborious way of saying that this is going to start getting gimmicky unless y’all slow it down. How many bad-ass feminist icons do we need to see before Alicia stops playing games and runs for office?

Eli comes to Alicia’s office and tells her that unless she agrees to run, Peter has no choice but to endorse Castro, because if Alicia’s off the ticket, Castro’s the only one who can win. When Alicia objects to Peter throwing his weight behind the Demon Barber of Fleet Street, Eli counters with a fascinating line: “He is a bad man, but sometimes the world needs bad men.” I couldn’t help but think about this line in the context of the show’s title. Has this kind of morally relativistic thing ever been said to make an argument for a bad woman? Robert and Michelle King have referred to this show in interviews as “The Education of Alicia Florrick,” and no other show in my memory has been as dedicated and as incisive when it comes to examining the differences in expectations between men’s behavior and women’s behavior.

Sidenote: is it just me, or is Alicia turning into the eye-rolley-est woman on television? She’s almost as eye-rolley as Lady Mary from Downton Abbey, who I once saw roll her eyes so hard I’m positive she got a good look at her own frontal lobe.

I watched the second-to-last scene of the show thinking to myself, “Okay, so Castro is kinda smarmy and serpentine, but who wouldn’t be in his position? What’s the big deal?” And then, in some hallway lined with filing cabinets, he made a big mistake. Big. Huge. He brought up Will Gardner. Not only did he bring up Will, but he also had the nerve, the gall, the unmitigated chutzpah to refer to him as Alicia’s lover, when he does not even know her like that. And I stood up and paced my living room as the only alternative to throwing something large and heavy at my television.

NO SWEENEY TODD DID NOT JUST GO THERE.

For a brief, evanescent moment, I wanted this to be a different kind of show. I wanted this to be the kind of show on which people pull pocket knives and shank each other. I wanted this to be a show set in the Old West, where you could shoot someone dead in the middle of the street for insulting you and a hungover, bearded town marshal would call it justifiable homicide. I wanted Alicia to take Castro’s oily, bespectacled, oddly hairless face and smash it into a drawer full of musty paperwork. But it’s cool. I calmed down. Because I trust this show. And I trust Alicia Florrick. Alicia Florrick done fought fools waaaay bigger than Castro. Yeah. Other people have tried to come for Alicia. Where are they now? Go look for them. Try to find them. You can’t. And if you don’t believe me, I have one annoying, hyphenated name for you: Wendy Scott-Carr. 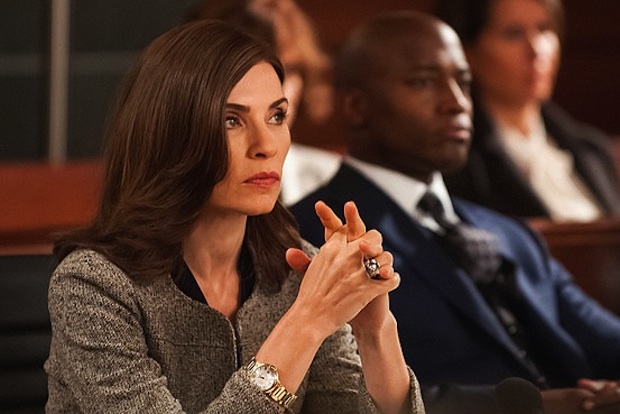