Thank goodness Alicia has finally said the words. She’s running, everyone. But it took about 56 minutes to get there. Let’s rewind.

Alicia starts off by pouring red wine, y’all, because strong women on network dramas have to drink a lot of red wine (I’m looking at you, Olivia Pope). She’s setting out platters of hors d’oeuvres, and it’s all for Eli and his special guest. Alicia’s no longer playing her coy State’s Attorney game, and she’s now admitting to “contemplating” a run, but the way she talks through most of this episode makes it clear that she’s running. Otherwise, Eli, Peter, and Alicia’s entire family will have the worst case of blueballs in history.

Eli tells Alicia what Bonita told him and Peter weeks ago, which is that Alicia is polling ahead of Castro (duh) and then the doorbell rings. It’s Steven Pasquale, looking better and longer-haired than he did on Rescue Me. The best thing about a show that shoots in New York is that every amazing Broadway actor will sooner or later be on it. Speaking of which… Where. Is. Patti. LuPone. (Also, where in the blazing bejesus is Taye Diggs?)

Throughout this teaser, which was beautifully shot by Tim Guinness and his team, Alicia is riveted by possibly the worst television show of all time. I love the way The Good Wife throws shade at television and makes fun of itself in the process. Alicia is a brilliant attorney, but she has terrible taste in shows. I don’t know if that guy on the show that was clearly a shot at AMC’s Talking Dead (or Talking Bad) is actually Joe Weisberg of The Americans, but I’m gonna assume it is because why not.

Johnny Elfman, the campaign manager played by Steven Pasquale, comes in and tries to play cool and read Alicia, but Alicia won’t be condescended to, at all, by anyone, ever. The two of them go head-to-head in a thing that weirdly resembles a kind of foreplay (or maybe that’s just me really wanting Alicia to get laid). This is all happening while Grace and her gaggle of Christian besties have choir practice, or ballet butterfly practice, or whatever it is that girl who did a pirouette was there for. The show’s handling of Grace’s Christianity was much more nuanced last week, and much more important to the story, and so it just looks like a thing that’s being played for cheap gags this week, unfortunately.

During her grilling by Johnny Elfman, Alicia explains why she became a lawyer in the first place. “I like clarity. I like rules that tell me what’s right and what’s wrong.” The fascinating thing about this quote is that the paces that Alicia’s been put through on The Good Wife have provided her with anything but clarity. People are desperate for clarity, and for a sense of right and wrong, and that desire sends some of us to law school and some of us to DVR every episode of Judge Judy. (Guilty!) But, if anything, Alicia’s journey over these past 5+ seasons has taught her that seeking clarity can be a fool’s errand.

Eli and Johnny Elfman bust open Alicia’s oppo file and remind her of all the awful clients she’s represented. Oh, yeah, and that time Zach got his Muslim girlfriend Nisa pregnant and then helped her get an abortion. Alicia finds out all the gory details and then flips out. I love watching Alicia’s mama grizzly get fired up. For most of season 5, I’d forgotten that Alicia even had kids. Also, Alicia has been walking in on Zach and Nisa making out a lot of times. Or is that just her imagination?

Alicia, Cary, and Diane tell Lemond Bishop about his subpoena, and how it’s a trick from the SA’s office to go after Cary, then they fire him as a client, despite the fact that all he ever does is threaten to kill everyone. But then, because Bishop is a crazy, well-dressed murderer, he’s all “Gurl, bye,” and refuses to be fired. Until the end of the episode.

Then Alicia wears jeans and pours more wine and gathers her mom and her brother to find out if what she heard from her campaign manager is true. There’s a serious, sotto voce talk between Alicia and Owen in the kitchen that doesn’t go well, despite the fact that Alicia knows exactly what “barebacked” means. Owen storms all the way out, when, in my view, Alicia was asking perfectly legitimate, concerned sister questions. If Owen is, indeed, sleeping with a married man who has sex with other men, on camera, without condoms, then that’s a thing that needs to be talked about. I just can’t believe they’re talking about it on CBS.

Alicia meets Finn Polmar in a bar to let him know about the photo taken of Finn leaving Alicia’s apartment at 8:30am. Quick question, though: do lawyers just get up REALLY early, or is it strange that Finn was all up in Alicia’s house before banker’s hours? These two have a very palpable spark between them (or, again, it’s just me wanting God’s plan for Alicia to include sexytimes). She leaves the bar instead of continuing to get drunk with Matthew Goode (huge mistake), and God punishes her by having her pulled over by the cops and sobriety tested in a convenient enough way for gawkers, and possibly people who work for the website Gawker, to drive by and photograph it.

Somewhere by the 7 train, Lemond Bishop meets up with Kalinda and assures her she won’t need to shoot him. He just wants to talk. He wants to know why “Kalinda’s firm” wants to drop him. This comprises over half of Kalinda’s 90 seconds of screen time this week.

Grace starts Googling Alicia, and her State’s Attorney website is on and popping, and Grace’s weird friend Jennifer even uses the word “Hillary.” But one weakness in Alicia’s nascent campaign is apparently Peter and his relationship with the intern who can’t afford chonis. But just kidding. Peter isn’t meeting with Lauren the Intern, but rather with her mother, which is what Connie Nielsen has been up to. I’m not even sure how a commando intern becomes a campaign issue, but then again, Peter’s had a hard time not having sex with women he’s not married to, so.

Stockard Channing has that meeting with the woman whose child she hit in that store, and the woman is all “you traumatized my child, so now I’ma need 50 G’s,” and Stockard’s all “I shoulda spanked you, bitch” and then I realized what this episode was really existing for: that line of dialogue. But the little boy she spanked was apparently kicking octogenarians, so everything’s fine.

Then comes the big bombshell, which is that Alicia’s State’s Attorney PAC was set up by none other than Lemond Bishop, which is, um, problematic. Alicia can’t look like her campaign is being bankrolled by an obvious felon, so that’s gonna take some cleaning up. Also, elected officials in Illinois must stop being really good friends with criminals. I feel like Jim Edgar was the last of our governors to not be indicted for something.

Next week: Taye Diggs better be back. His reps apparently did his deal all wrong. 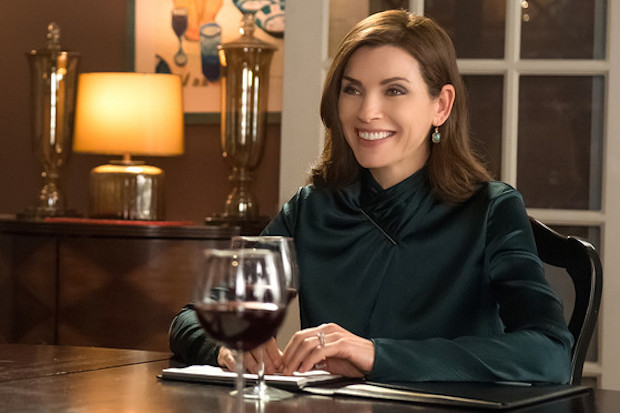