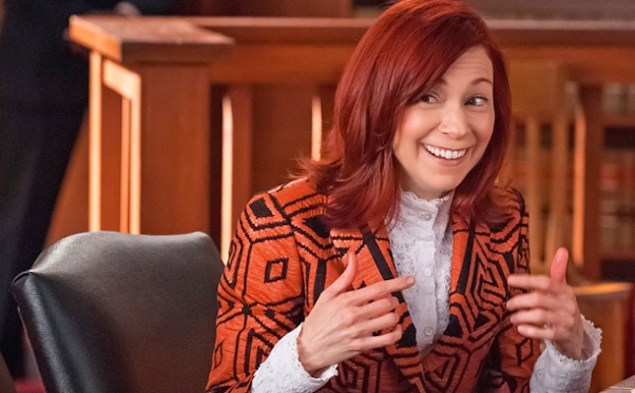 Carrie Preston and her wonderful world on The Good Wife.

Alicia’s campaign heats up with some obligatory PR. Eli’s daughter Marissa shows up to be Alicia’s Tony Hale while Johnny Elfman prepares Alicia to go in front of the voters on Pastor Jeremiah’s Internet show and pretend like she’s not an atheist. (I leave it to you all to debate whether or not the name Pastor Jeremiah was a nod to the preacher that got then-Candidate Obama in hot water in early 2008.) I love this story, not only because it’s so true that we are insanely far from having an avowed atheist in most public offices (especially the highest ones), but because it taps into The Good Wife’s deeply lived-in and deeply legitimate cynicism about politics. Johnny Elfman tells Alicia that the voters deserve to know who she is. When Alicia counters that she’s an atheist, he immediately backpedals with “They deserve to know who we want them to think you are.”

But luckily, Alicia has a Christian daughter who can prep her for her interview, like she prepped her for arbitration a few weeks back. I love any real scenes between Alicia and Grace, including the one from tonight, but I start to worry when it looks like Alicia only takes genuine interest in Grace’s religion when it can serve her own ends, whether that’s in court or on the campaign trail. The interview goes smoothly, so smoothly that Grace’s friends think she’s converted her mother. The look on Grace’s face, though, says she’s doubtful. I am sincerely hoping this builds into a confrontation between the two of them. With Zach off to college (and helping his girlfriend get an abortion), Grace is the one left at home, and we could use some deeper exploration of her relationship with Alicia. As Alicia’s ethics get more and more, shall we say, complicated, how will that affect her dynamic with Grace?

Alright. Here it is. I’m really perturbed by how The Good Wife is portraying Elsbeth, one of my favorite recurring characters. For several seasons now, the show has expertly ridden a fine line between Elsbeth the Brilliant Attorney and Elsbeth the ADHD/OCD/Hot Mess Attorney. In fact, for most of her time on the show, both those Elsbeths informed each other — she often wielded her eccentricity as a distraction to disarm her opponents. But now here she is, bursting into AUSA Josh Perotti’s office and reading him the riot act for failing to call her and tell her their meeting got moved, except that he did call and she just didn’t get the message (she blames her assistant Fantasia, whom, based on that name, I hope we NEVER MEET). We go out on the street with them, where (overkill alert) Elsbeth freaks out over sidewalk grates. I’m not sure whether the show wants to go in a distinctly different direction with their Elsbeth stories, but someone had better decide, and fast, because it seems now like her hot messiness is being played for gags (or as a weakness that Alicia is all of a sudden deciding to exploit when it’s convenient for her in the courtroom). But more worrying: why on earth is the Elsbeth/Josh relationship, a relationship between two guest stars, the relationship that anchors this entire episode?

In court, Ana Gasteyer is back as Judge Patrice Lessner, the one who forces all the attorneys to add “in my opinion” to everything they say. While questioning Nils Landrusyshym (clearly an inside joke for any TV writer who’s had a hard time finding a character name that’ll get past Clearances), AUSA Josh Perotti makes it abundantly clear that this isn’t a trade case, and when Alicia calls him on it, he admits (in his opinion) that he’s really charging Alicia’s client with economic espionage. That is a thing that can get you locked up for a long time, so everyone’s shitting bricks. Somewhere along the way, AUSA Perotti sniffs the air around a baby and asks his mother (or whomever’s pushing his stroller) if he smells baby lotion. Okay, so I get it — eccentricities, if deployed properly and sparingly, add nice color to characters on television. But Josh’s heightened sense of smell is played so gratuitously and creepily that I had a hard time listening to anything else he said for the rest of the episode. In fact, I’m struggling to take either Josh Perotti or Elsbeth Tascioni seriously as lawyers, which is something I never thought I’d say. Sure, Brenda Leigh Johnson on The Closer liked her sweets, and never missed a chance to sneak a peppermint patty, but she never stopped being a formidable interrogator. Elsbeth and Josh have just turned into a pile of quirks, and that last smart beat of Elsbeth recording Josh as he destroyed evidence wasn’t enough to redeem this episode for me, even if it did help win the whole case.

Meanwhile, back at Lockhart/Gardner/Canning (or now just… Canning?), Diane has sent Louis Canning and David Lee an eviction notice, like a boss. Diane is so over Cary and Alicia’s ghetto offices, and she wants to get back to the 28th Floor, bad. Canning and David Lee hit back with a bunch of OSHA violations that will take hundreds of thousands of dollars to fix, and the battle is on. It turns out that due to some tiny clause in the lease, Diane can’t really evict anyone — or so she thinks, until it’s revealed that Howard Lyman can save everything and preserve the eviction. Eeny meeny miney moe, as Zebra Katz would say.

Cary is in a bar mixing it up with his fellow Ivy League law school grads, and a Sassy Blonde starts flirting with Cary and asking him lots of questions. She’s totally slumming it, drinking a beer in a Harvard T-shirt, so you know she’s cool. Anyway, Cary gets progressively drunker and then decides to leave, until a young lady whose name I didn’t catch (I’ll just name her Curls & Cleavage after her two most conspicuous physical attributes) stops Cary with the sheer power of her dulcet voice and her breastesses. C&C says something lame to Cary about gang rape in prison, but that’s apparently enough to get Cary excited.

Cut to him making out with C&C in the hallway, and running into Linda Lavin, who is committed to cockblocking the hell out of him with a “spot-check” tour of his apartment. She even goes through his cabinets like his mom and asks to see his Uber receipt. It’s then that she discovers that he violated his bail by inadvertently going to Indiana. Okay, as a Chicagoan, I’m gonna need someone to explain to me why the hell Cary was in Indiana, unless it was to get fireworks or cheaper gas. That little Ivy League shindig would never ever ever have been in Hammond, or Michigan City, or anywhere else within a few minutes of the border. So Cary gets hauled back in front of a judge for a revision of his bail — he’s on ankle monitoring and a curfew. Oh, and no contact with Kalinda. I really really wanted to be emotionally affected by that last restriction, but I so wasn’t. Maybe if Cary had left that party and tried to go home with Kalinda instead of with Curls & Cleavage, I’d feel differently. But neither one of them seems terribly invested in whatever the hell it is they’ve got going on, so why should I get invested? And what on earth are we doing with Cary? During the first few seasons, his youth and naked ambition were a great foil to Alicia’s, erm, non-youth and ambivalence. I miss Cary’s fighting spirit, and I hope there’s still time this season for it to come roaring back. I long for the Cary who was so formidable in the early days that Alicia went to Eli looking for a way to get rid of him from Lockhart/Gardner.

Speaking of L/G, or L/G/C, Canning and David Lee clear out, but not before trashing the place like they’re leaving a foreclosed home. Alicia and Diane arrive to see the mess, and Alicia decides, over Diane’s objections, to take Will’s office. No, it is not Louis Canning’s office. It was NEVER Louis Canning’s office. It is, and always will be, Will Gardner’s office. Will’s presence (or lack thereof) still hangs like a specter in the air, and the show really succeeds when it acknowledges that head-on. The Kings made a point of treating Will’s death with consummate honesty last season — it hit us out of nowhere, as death sometimes does in real life, and sent ripple effects throughout the lives of everyone Will knew. I hope they keep that up this season. 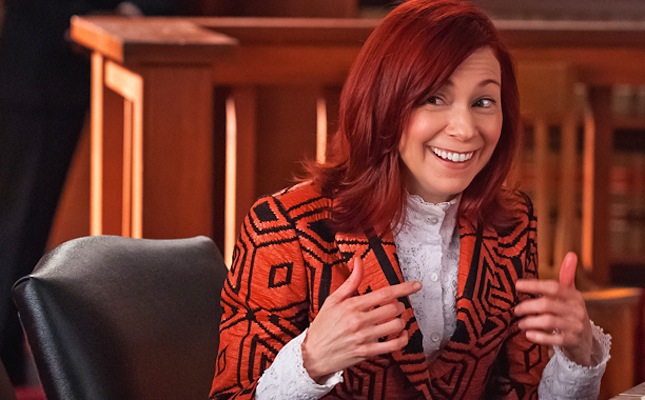