After months of development and beta testing, The Guardian launched a redesign of its US website this morning. The new look and approach to content relied on user feedback during the eight-month development period, including more than 25,000 comments from readers.

“At the heart of this is to build a design language and a system that is consistent wherever readers want to view our content, whether it’s an app, mobile or on the desktop site or in the print paper,” Guardian creative director Alex Breuer told the Observer during a demo yesterday. According to Wolfgang Blau, The Guardian‘s director of digital strategy, homepage visits are still strong despite growth from mobile and social networks. The Guardian claims 30 percent audience growth from the previous year and 27 million unique visitors to its US site.

One of the major innovations to the site was the idea of using a “flexible ‘container’ format” that looks like a miniature homepage in a vertical, banner-like form. The new system gives editors more control over currating sections and ability to respond to breaking news and updated stories.

“Containers is a bit of a bloodless word, but technically, they are their own little units, so we liked the term,” Mr. Blau said. “If you look around the market leaders in news publishing right now, you usually see a top zone and then come the verticals. The zones by vertical don’t reflect how readers use the site. They reflect the internal organization of a newsroom.”

A container, Mr. Blau explained, are more intuitive to the way that people actually read the site. “When you have your lunch break, you don’t say ‘I want to read two pieces of science, three pieces of culture and one of business.’ You want to read what’s interesting,” he said. The team identified different types of typical reading experiences or, what they called, “user journeys,” differentiating readers who come to the site to get news updates from those who come in “snacking” mode through social media.

Unlike last year’s redesign trend, which leaned heavily on tiles and large-format images,The Guardian tried to anticipate  innovations to what sites will be able to offer in the not-far-off future, when data is used to more accurately anticipate user behavior.

“Not yet, but we will soon be able to say, okay, you came through Facebook and then show you other Guardian content that is doing really well on Facebook right now,” Mr. Blau said, of the next phase of the redesign.

Another new aspect to the site is an emphasis on color-coding to delineate types of content across sections (features are dark pink, photos and videos have a gun-metal grey are shown against a gun-metal grey background, opinion stories have yellow bylines, and so forth).

“The idea being that wherever you are on the site, color will give you cues about what content to explore. Through testing, we found that in the existing site, people would often click through links and be surprised where they ended up,” Mr. Breuer said.

Of course, developing a new site while inviting a continuous flow of user feedback is not the easiest undertaking. Nobody likes change, and the type of loyal readers who go out of their way to give feedback on the first significant changes to a homepage in seven years are probably the most resistant.

But at least some of those die-hard readers have had some time to get used to it.

“One of the good things about having such a public open design and development approach is that, although there are still going to be some people startled by the changes, there is a whole group of loyal users who have kind of come along with it and are used to it,” said Cecilia Dobbs, the vp of product for Guardian US.

Now it’s UK and Australia readers who will have time to get used to the new look. The redesigned site will launch in those countries in a few months. In the meantime, UK and Australian readers can chose to view it in beta. And give feedback. 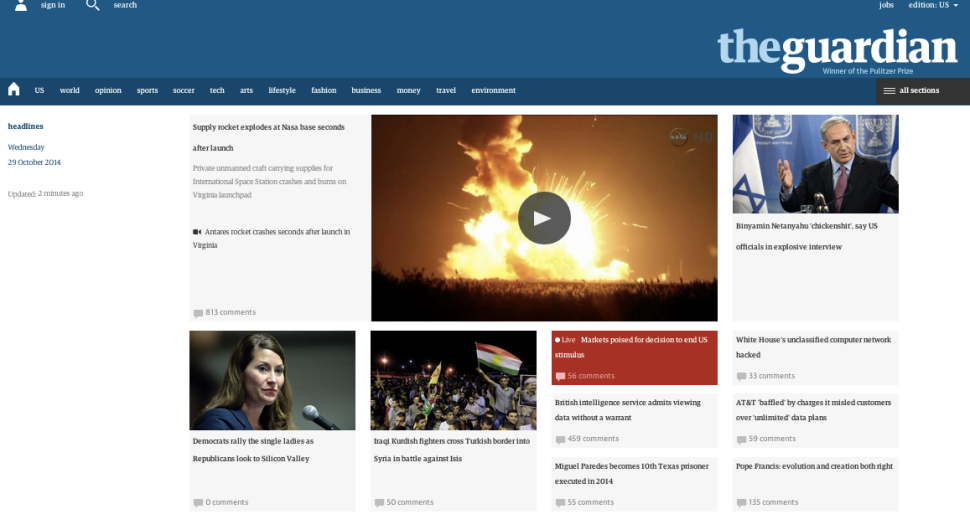