If you were never lucky enough to see the late, great Beryl Reid in Frank Marcus’s fabulous play The Killing of Sister George, brandishing her brilliance over stunned audiences in London or on Broadway or in the 1969 movie version directed by Robert Aldrich, you have been a little poorer in life. That’s why very few people have ever attempted to revive it. Without Beryl Reid, so much is impossible to recreate, or literally preserve for posterity. But that doesn’t mean you’ve had your last chance to see this dynamic play in action.

Thanks to the new off-Broadway revival by The Actors Company at the Beckett, director Drew Barr has done a credible job of bringing it back to life. Caitlin O’Connell is no Beryl Reid, but she’s a fine actress with a power of her own as the dethroned soap opera queen of the BBC radio. On the air, she’s Sister George, a beloved bike-riding nurse in the village of Applehurst, and a metaphor for the traditional values of merry old England. In real life, away from the microphones, she’s June Buckridge, a crusty, cigar-smoking lesbian who is in a steaming rage because she’s being bumped off to boost ratings. A butch and neurotic truckdriver type, she takes out her frustrations on her fluffy live-in girlfriend “Childie” (Margo White), so named because their flat is cluttered with her doll collection and other children’s toys. When a programming supervisor from the BBC named Mrs. Mercy Croft (Cynthia Harris) arrives to deliver the bad news that her character is being sacked, June (a.k.a. George) can be insincerely charming over a cup of tea, but when they’re alone, she tortures her flatmate by making her drink the bath and forces her into submission by threatening to decapitate her favorite doll. The plot moves into second gear when Mrs. Croft reveals a latent touch of Sappho herself and takes Childie away for a cushier life.

Sadomasochism was new to audiences when the play was first produced in 1965 and so was the verboten subject of female homosexuality, causing a sensation of protests in the provinces, where audiences stormed out in high dudgeon. But when it reached the West End, The Killing of Sister George was hailed as a masterpiece of sexual liberation, winning masses of awards and running for 18 months before moving across the pond to Broadway. It was viewed as the first instance in which lesbians were treated not as a problem or social stigma, but as part of the natural order of things—with dignity, sobriety, honesty, candor and devastating humor. In the old days, it was shocking to think lesbians had any fun. All George has to do is rattle off the preposterous plot lines that kept England riveted to their radios and you’re in stitches.

The issues tackled here, so revolutionary in 1965, are nothing new today, at a time when anything goes—and often does, right through the exit doors. But the current revival, wisely resistant to gimmicks, polishes off the original insights exactly as the author intended, and the four ladies in the cast are all but unimprovable, even in the absence of Beryl Reid’s genius. In her frilly nighties and Barbie ribbons Margot White, as the feminine, insecure, doll-playing Childie, has the petulant, flower-nibbling quality of a nubile orphan. She could have been the role model for Carroll Baker in Baby Doll. Cynthia Harris is a perfect crumpet as the crusty, dignified cobra from the BBC whose unpleasant duty is to inform Sister George she’s being killed off in the soap (“We’re doing everything to show it’s the lorry’s fault”), while staging a little seduction of her own on the side. Dana Smith-Croll is properly exotic as the flamboyant medium who lives downstairs. And orchestrating the action and the meaty dialogue with a blunt baton is the excellent Caitlin O’Connell, a funny banana in Oliver Hardy drag, and a somber sadist when her bottom hits the sofa, making hard little thuds through her pleated tweeds, puffing her cigars without pushing the character into caricature. She is tough, mean, jealous and selfish, but never sad, depressing or stereotypical. There is always, in her performance and in the play itself, a spotlight on the human condition that makes The Killing of Sister George timeless. 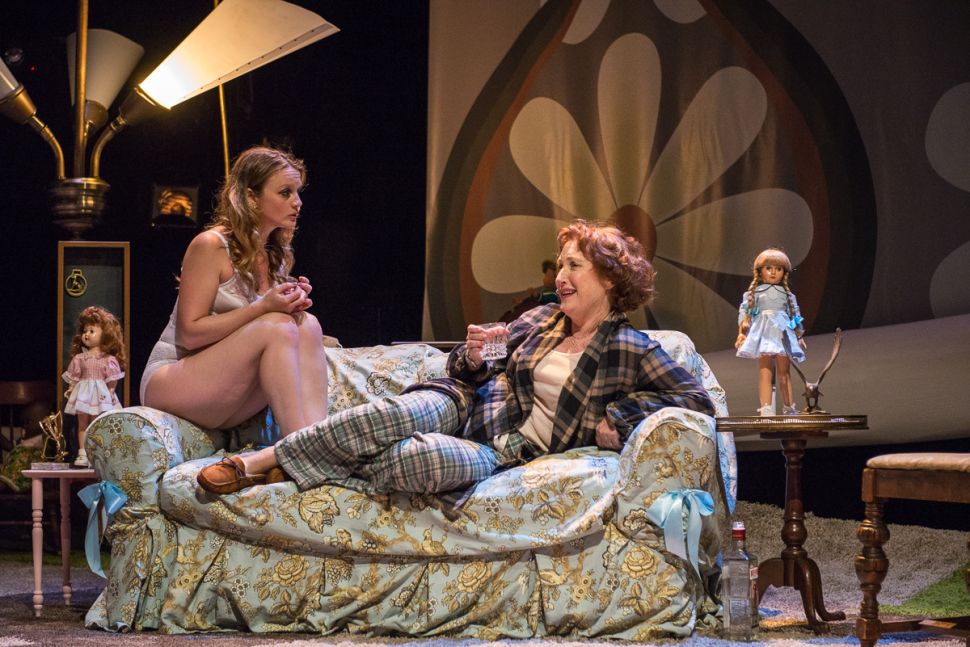