It didn’t quite dawn on comedy duo The Lucas Brothers just how far they’d come from their New Jersey/New York comedy club beginnings when they sat a table, reading scripts for 22 Jump Street with Channing Tatum and Jonah Hill. And not quite yet when 22 Jump Street was a box office hit, and the twins arguably stole every scene in which they were featured. Nope, that aha moment came after a Brooklyn cop stopped them on the street, and instead of asking about the weed they had in their pockets, he asked for a photo. “He was like, ‘I saw you guys in 22 Jump Street and I’d love to get a picture.’ It fucking blew my mind,”  Kenny Lucas told me.

“That’s when I was like, okay this is insane. Cops are stopping us in the middle of the street asking for pictures, and that is absurd,” chimed in his brother Keith, sitting next to Kenny wearing a matching white shirt and Yankees hat.

I was talking to The Lucas Brothers on the set of TruTV’s first ever sketch comedy series, Friends of the People, which premieres tonight. After watching their co-star and fellow comedian Jermaine Fowler punt a (fake) baby down a flight of steps no less than three times, the identical twins and I sat down in an out of the way, echo-y hallway at Lehman College in the Bronx.

When I say identical, I mean it. Matching clothes aside, the Lucas Brothers are near impossible to tell apart, down to the identical spectacles and the way they speak. Embarrassing enough, I had them say their first name before every sentence they spoke, because transcribing an interview with the Lucas Brothers would be impossible otherwise. “I don’t hear my first name enough, anyway,” Kenny pointed out.

And he’s not wrong. Kenny and Keith are credited as “The Lucas Brothers” in everything they appear in — from gigs, to movie roles, to the title of their cartoon. They even share an IMDB page. This also isn’t an accident on their part, and it most definitely isn’t a hindrance on their careers, or even a personal problem.

“To me, since we’re selling ourselves as twins, and we’re sort of a package deal, it really doesn’t matter. Kenny doesn’t matter as a comedian,” Kenny said. “I mean, I could do independent work and try and sell myself, but I don’t think that’s what I want to do. I got into this profession to be with [Keith].”

“I think we’ve been trying to strive for this perfect brotherhood persona, but I don’t think we’re there yet. It’s like the Marx Brothers, the Smothers Brothers,” Keith added. “Those guys did it, and there’s a reason they did it that way. Keith Lucas to me is boring, He’s just a regular dude.”

Back in the day, though, it was Kenny that first got the standup bug by himself. Both brothers were in their third year of law school — Kenny at NYU and Keith at Duke — when Kenny took some comedy courses and decided it was more of a release than the track he’d been on his entire life. Naturally, he called his twin.

“[Kenny] called me up and said let’s do standup. And at first I thought he was insane. This is not going to happen,” Keith said. “But he sent me a clip of his standup — and it was terrible — but I got to see he was doing it, and it seemed very enthralling to me.”

Both brothers made the questionable decision to leave law school to pursue standup full time. The reactions ranged from cautiously supportive to — for Kenny, at least — deeply personal. “My girlfriend at the time broke up with me. I mean it was pretty absurd, at the time I think she had a point,” he said. “Although her favorite actor is Channing Tatum. In theory, she could have met him.”

In hindsight, the jump from law to comedy — girlfriends aside — seems to have been a fantastic move. The year 2009 saw a Late Night with Jimmy Fallon appearance, 2013 an Arrested Development spot. This year looks to build on their biggest break, 22 Jump Street, with Lucas Brothers Moving Company returning with 12 new episodes around January, and Friends of the People bowing tonight with the Lucas Brothers not only on the cast but writing multiple sketches an episode. And with their writing comes their signature voice — called deadpan by some but described as simply “laid back” by Kenny and Keith.

This style, according to the brothers, wasn’t exactly pre-planned but cultivated over time. To be fair, a lot of this time is spent as normal, non-movie star dudes. Dudes who do comedy but also find time to watch professional wrestling and smoke a ton of pot.

“A lot of artists say that weed is the thing that really propels them. I can certainly say that this has propelled us. It has made our comedy better,” Keith tells me. “And I think you start to recognize the beauty of the world. You don’t take your life too seriously. It’s such a happy drug, man.”

And as for the professional wrestling, Keith and Kenny are lifelong fans and cite it at the top of the inspiration behind their comedy as well. They delight in my comparison of them — with matching attire, posture, and face — as a tag team.

“It’s the same idea, the same concept almost, but applied to comedy. I feel like we’re [1980’s tag team] The Bushwackers because they were so silly. Just silly, and absurd, and they dressed alike and just crazy and weird,” said…one of the Lucas Brothers. You see, when the subject of them as a tag team came up, they stopped saying their first name before their quotes. What followed was a rapid-paced, confusing riff session.

“Or The Bush Wickers? Because we live in Bushwick?”

“Well I think the Bushwickers. Actually, I mean we do smoke a lot of marijuana so Kush Wackers makes sense.”

“Yeah, and Kush Wackers is cool.”

Listening to them build on a premise without a sense of which brother was which, I could see why they are so comfortable with The Lucas Brothers title, at least as comedians. They may not have found that perfect brotherhood persona yet, but they’re close. 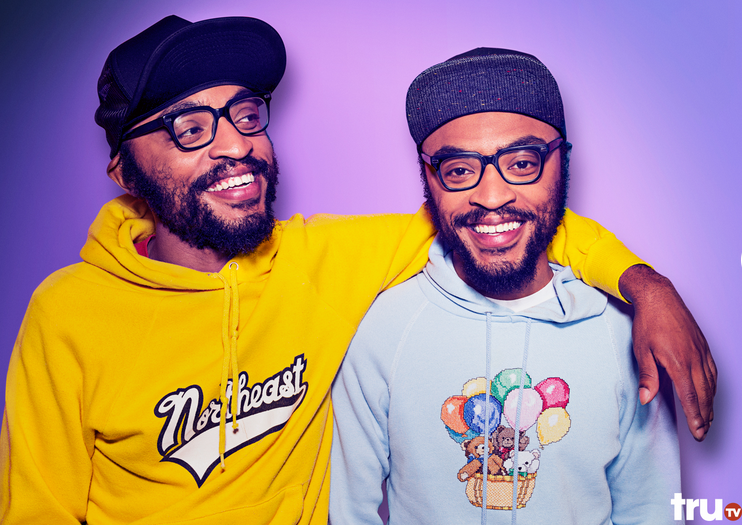