Purists have always turned their noses up at the snappy, glorious, sparkling and ageless joy of the 1949 MGM Technicolor movie version of On the Town. The reason is easy to read, but only occasionally pardonable. Everything was close to perfect, but they bought the magnificent score by Leonard Bernstein, Betty Comden and Adolph Green, then discarded most of it. The latest (and best) in a long line of mostly second-rate Broadway revivals, which opened last week at the Lyric Theatre off Times Square, brings back all the songs from the original 1944 stage production directed by George Abbott. But the star wattage stayed home, on the shelves of your video library. It has three terrific sailors in Tony Yazbeck, Clyde Alves and Jay Armstrong Johnson, who make the most of their 24-hour leave in the canyons of Manhattan where the “Bronx is up and the Battery’s down” and three dream girls who help them prove “24 hours can go so fast.” But as attractive as they are, as loud as they are belting out to the second balcony, and as fast as they are at flying across crayon-colored cardboard sets that look like tacky Las Vegas floorshows, they erase no golden memories of MGM magic.

It’s great to hear “Lonely Town” again, and Mr. Yazbeck raises it to the rafters. He can dance, too, but in all fairness, he’s no Gene Kelly. His libidinous trio of girl-struck sidekicks, cruising to take in all the Manhattan sights, including some of the two-legged kind, is rounded out by handsome Mr. Alves as Ozzie and punchy Mr. Johnson as Chip. Nimble and exciting, they can pretty much do anything, and do it all with equal elegance and panache. But although their three dates deliver admirably, they couldn’t fill Vera-Ellen’s toe shoes. It’s fun to watch Megan Fairchild, a principal dancer for the New York City Ballet, tour jeté her way through Jacques Bergasse choreography based on original ideas by Jerome Robbins, but as Miss Turnstiles, she can’t act, and on the rare occasions when she does speak, her articulation is full of rocks. Only when she spreads her wings and sails do you finally begin to realize why she was hired. As Claire, the oversexed anthropologist who knocks down the Tyrannosaurus in the Museum of Natural History, Elizabeth Stanley milks every drop of humorous Vitamin C from “I Get Carried Away,” but she can’t carry Ann Miller’s tap shoes. As Hildy, the brash cab driver who aims her sights and brakes on Chip, Alysha Umphress is both loud and funny, and yet she lacks the endearing charm and comic timing of Betty Garrett.

So this On the Town looks like a very good summer stock production—which, as a matter of fact, it is: an import from the Berkshires. But what it does best (for me, anyway) is serve as a reminder of what a monumental job Gene Kelly, Stanley Donen, Roger Edens, Saul Chaplin, Lennie Hayton, Conrad Salinger and the rest of the MGM geniuses in the legendary Arthur Freed unit did of pruning away the clutter to give the star-spangled production an unflagging tempo. They knew how to edit, condense and shape, achieving the kind of sizzling momentum the current (uneven) On the Town often misses. From the evidence onstage now, there’s plenty of clutter still intact—bad jokes, dated dialogue, extraneous characters wandering in and out without purpose, and misguided tertiary characters who add nothing to the plot. The calamitous intrusion of scenery-chewing loudmouth Jackie Hoffman as Miss Turnstiles’ dipsomaniac vocal coach is an especially grievous mistake. Florence Bates got every laugh out of the old hag in the movie with only half the babble and we got the message. With the charmless Ms. Hoffman guzzling gin like a vaudeville comic and dragging herself into one scene after the other, we get a hammer in the head.

As sneezing Lucy Schmeeler, Hildy’s roommate and intended date for Gabey, the great Alice Pearce beefed up the role and stole the show in an arresting number called “You Can Count on Me.” In the original production, Lucy is a nothing role and she doesn’t even sing. The direction by John Rando is full of pep, the huge cast forms gridlock on the stage, and there’s a gimmick a minute. To buoy the spirit of the war years, the show begins with the National Anthem, and the audience even sings “Happy Birthday” to any member of the military who shows up in uniform. But there’s still a lot of thrilling precision when the sailors dance together, and more than a cornucopia of elegance and beauty in the dream ballets. Swooning to classic Broadway songs like “Some Other Time” and “Lucky To Be Me” can enrich any evening, and I wouldn’t call it charmless, but why did the audience of theatre parties, bussed in from Jersey, react to every scene like they were at the opening night of Ethel Merman in Gypsy? You won’t be bored by all the gridlock in On the Town, but there’s so much of it! And it’s entirely too long for its own good.

After nearly three hours I limped home exhausted, climbed into bed and lost myself in the movie of On the Town all over again. New York, New York may still be a helluva town, but MGM is better. 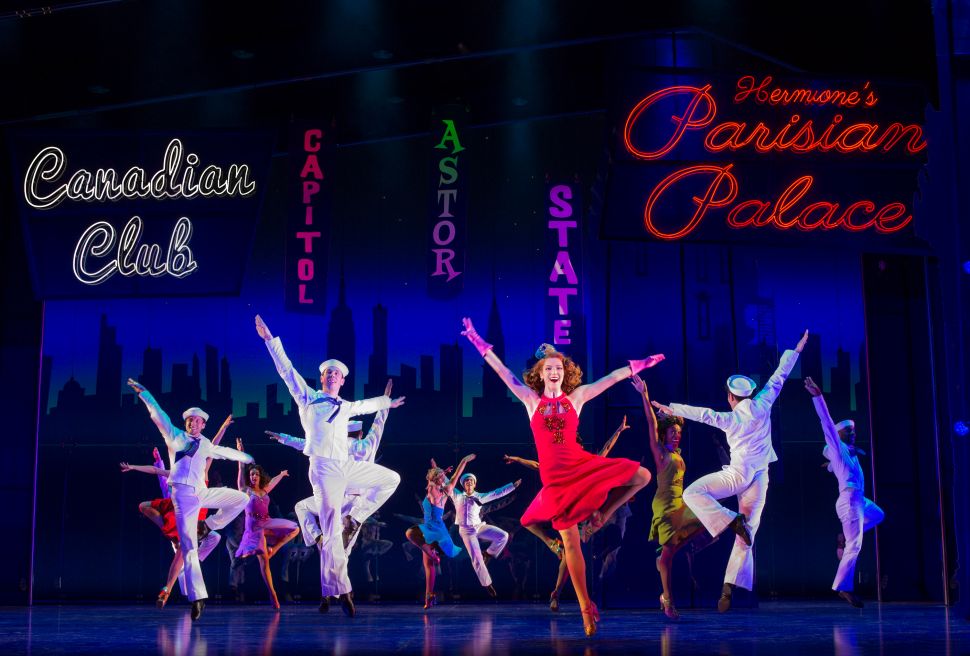 Filed Under: Theater, On the Town, Theater, Reviews, Broadway, mgm