Last night, I figured out the twist of Showtime’s new drama, The Affair. No, it’s not about multiple realities or expensive t-shirts. It’s not even about how dumb Noah is. Would you like to hear my theory on how the show ends? Then read on. (But don’t come to me crying if this is actually correct and you don’t like that I spoiled the show. You’ve been warned.)

In the flash-forwards, we see Noah and Alison being grilled by the same detective about their relationship, so we assume that they were being investigated over the same case, right?

Noah is being interrogated about a crime that happened in Montauk which he in some way alluded to in his second book, now published. Alison is being investigated even further in the future, after Noah is killed for his indiscretion about the town’s business. (I’m assuming drug trade, which is what Cole’s brothers are bringing into the town via the fishing boats.)

Here’s how I got there:

Temporal Lapses: Our detective refers to Alison as “Ms. Bailey,” her maiden name, instead of “Ms. Lockhart.” So she’s gotten divorced and/or has been widowed. Fine. That could have been at any point. She’s also significantly older in these flash-forwards, or at least is rocking a drastically different look (hair length and color, are the greatest tip-offs), where as Noah doesn’t look a day older than he did when the affair was taking place.

-She also has a kid.

-She was also involved in some sort of wedding, which we are led to believe is the night she is being questioned about. The detective asks why her lecherous boss Oscar Hodges was invited.

-We might assume that Oscar is the victim of the run-down, but if so, why is he still alive in Noah’s retelling of the story? (“If I were you, I’d be going to talk to Oscar Hodges.”) Noah also implies that there was a century-old feud between the Lockharts and the Hodges, which we can deduce means the victim of the case Noah has been brought in to discuss involves Alison’s extended family, who were all super against the idea of Oscar’s bowling alley. Could one of these victims be Cole or one of his brothers: Scotty, Hal or Caleb?

-Alison’s actual narrative contradicts itself: she tells Noah on the beach she doesn’t smoke, but in an earlier scene with her with her sister-in-law(?), we see her smoking up while getting her tarot card. Every good liar knows: keep it simple, stupid. As Vinnie pointed out, Noah’s ridiculous details in his recounting of events doesn’t make him look good, but it does seem consistent. Alison’s story doesn’t.

-These two stories don’t even remotely match up. Like…at all. For a he said/she said, these two seem to be talking two different languages, and there are more differences than similarities. (Did Noah meet Alison after the town hall meeting or text her? Did they meet on the wharf or in the library?) These questions are relevant not just in their stories’ difference in tone but in facts…where they were, how they arranged to meet up, what was discussed. This hints less at collusion between the two, than an attempt to reconstruct an entire history…perhaps one is so wildly different from the other because the person telling it knows her lover isn’t around to object. Sure, maybe I got it backward and Noah killed Alison. But the detective refers to the victim in Noah’s case as “that fella.” So let’s rule that out. Ditto to all of Noah’s children, or wife, or in-laws. “Fella” is something you call a man the perp doesn’t really know.

-We also know that Noah’s only written two books, and his second involves a dark history of Montauk and its history of family rivalries and bootlegging. We know he suspects Oscar of some sort of illicit business, possibly tied into how bowling alley plans. Could he have been murdered to keep the town’s secrets buried?

General shadiness
-While Noah might harbor fantasies about Alison coming on to him instead of the other way around, his retelling involves various wacky details that still paint him as an arrogant shmuck. Meanwhile, Alison’s narrative is much more self-serving, where she is a victim from the danger hiding around every counter. Oscar sexually harasses her in a totally absurd way that literally makes non narrative sense; her brothers-in-law are all super menacing, and now she has this creepier Noah hanging around. Noah might make himself the hero of his own story, but Alison is determined that the detective view her as a victim of every man she’s ever met. A dame to kill for, perhaps? Pinning Noah’s murder on her (presumably) ex-husband, Cole? Damn, I hope this turns into a Gone Girl-type situation.

-Noah doesn’t know why he’s being interrogated, to which the detective replies, “we’re just gathering up the information of anyone who knew the victim, to see if anyone might have motive to kill this fella.” Noah responds that he “thought it was an accident.” Say what you will about Noah’s grandiosity and arrogance, one thing he’s not? *Clever.* He is genuinely confused about why he’s answering to the police, but you can almost feel his salivation over the idea of a consulting gig. Especially when he tells the detective to buy a copy of his book that involves a theory about the town’s dark business.

-He’s married in the flash-future. Remarried? Possibly. Maybe that was the wedding the detective was referring to in Alison’s case. But again, super doubtful. Because the detective asked if Alison was at the wedding, which is a weird question to ask the bride.

-Meanwhile, Alison knows exactly what she’s being questioned for, which may or may not involve a drug import business that Will, Scotty and Caleb have going on, using dead fish as a cover. Think about it: Alison’s shady vibe with the fish she delivers to Caleb from Will in the second episode, which comes in a cooler that seems heavier than it should be, and which Caleb immediately stashes in a back room before handing back to her, empty. She asks him if he wasn’t supposed to keep that back door locked. Perhaps the town’s bootlegging days have become more hardcore? Scotty shows up to oversee the “delivery” of the fish while Noah and Alison are at the dock with Will, which spooks Alison out.

-Alison doubts that it was anyone in the party who ran “him” down, because they were all locals, and the victim was run down on a road that led to a new fancy club. Noah, the outsider/Richie fancy guy, would be the only plausible player to make such a trek. Her pronoun use is very specific in these scenes…it’s all “him” and “he.” Whereas Noah doesn’t refer to the victim as male or female…only the detective does. Alison is stressing her bond with the deceased, Noah isn’t. Because in Alison’s case Noah was the victim. Her story, if it comes down to it, might give her a credible self-defense case, because Noah the stalker is so much more menacing than Noah the buffoon.

-The detective, after questioning Alison about her whereabouts, asks if she thinks he’s “barking up the wrong tree.” Because she’s a suspect, d’uh. TO NOAH’S MURDER. At which point she starts showing just the slightest amount of human life.

“I’d do anything to find out what happened to him. I can’t believe he’s gone.”

Whomever she’s speaking about, Alison wants us to believe she cared for the person who died. Noah sees the accident/murder as part of a hamlet-wide feud involving the Hodges and Lockharts.

My theory? We’re talking two separate cases, paced years apart, featuring the same detective. Alison knows who killed Noah. She’s also had his child. Let’s see if I turn out to be right. 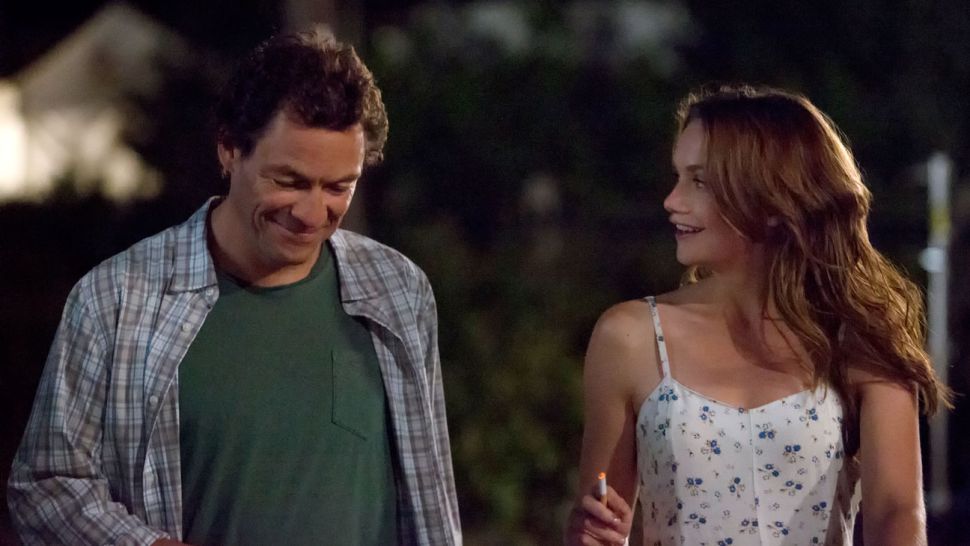